Biden would like to have a “public option” to “allow people to into government coverage without eliminating employer-based insurance.” 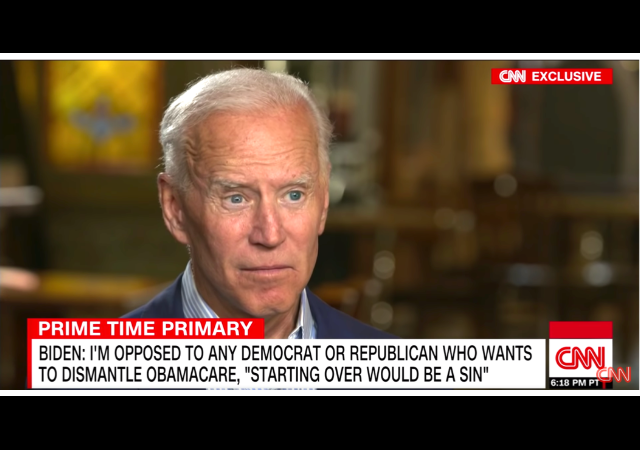 2020 Democratic presidential hopeful Joe Biden has stuck to his guns on Obamacare even though his rivals have jumped on the Medicare For All bandwagon.

Biden stressed to CNN that he finds it “a sin” to replace Obamacare with Medicare For All.

The former vice president, in an exclusive interview with CNN’s Chris Cuomo airing on Monday, argued that former President Barack Obama’s signature health care law, also known as Obamacare, should be expanded to allow people to buy into government-run coverage.

But he said that “starting over would be, I think, a sin.”

The top four Democratic candidates have backed Medicare For All, which would eliminate private insurance. Biden slammed those candidates because they have told Americans, “if you’re satisfied with your employer-based health care, you’ve got to give it up.”

Some Americans find this okay, even though Sen. Bernie Sanders’ (I-VT) plan would mean a rise in taxes. Americans justify the hike because they believe it “would no longer be required to pay insurance premiums, deductibles and copays.”

Other candidates want to keep private insurance, but only as a supplement to Medicare For All.

Biden would like to have a “public option” to “allow people to into government coverage without eliminating employer-based insurance.” Obama wanted this option in his 2009 Affordable Care Act, but could not get it through Congress. Biden believes “things are changing,” which means he could push it through Congress.

Biden also slammed those who want to make changes:

Biden also criticized his Democratic opponents for pushing ideas that would curtail the power of lawmakers and current Supreme Court justices, such as expansive use of executive orders, which Harris has proposed, and adding members to the Supreme Court, which South Bend, Indiana, Mayor Pete Buttigieg has backed.

“The idea that somehow we have decided that our system doesn’t work anymore, which I’m hearing some of them saying — that we’re going to, you know, pack the courts; we’re going to fundamentally change the way, I’m going to do what Trump did; if we take control, I’m going to go in there and I’m just going to, by executive order — what are we talking about?” he said.

Most people forget that doctors are there to help you. If you do not have insurance, they will likely work with you on payment plans or have you pay whatever you can afford. The medical community has seen a rise in direct primary care, which eliminates the need for insurance and has the patients pay directly.

I have noticed more cash-only centers in Oklahoma. One surgery center here made national news due to its practice. The center lists its prices and does not take insurance.

One woman needed a hysterectomy but did not have insurance. A friend told her about the Surgery Center of Oklahoma, which listed the procedure at $8,000. The price “included the cost of the procedure itself, an overnight stay, a follow-up appointment, and any other meetings ahead of time.” The woman drove to OKC and paid $30,000 less than what she would have paid at other places.

Stop making medicine so complicated. I do not get why people believe the medical sector is different from any other business. If they do not make a profit, they cannot stay in business, just like everyone else they deserve to make money for their hard work.

How is it that the dumbest people ascend to such heights of power, and then stay there forever?

Never understood how anyone could vote for a village idiot like this.

Can they really not tell that he’s simple?