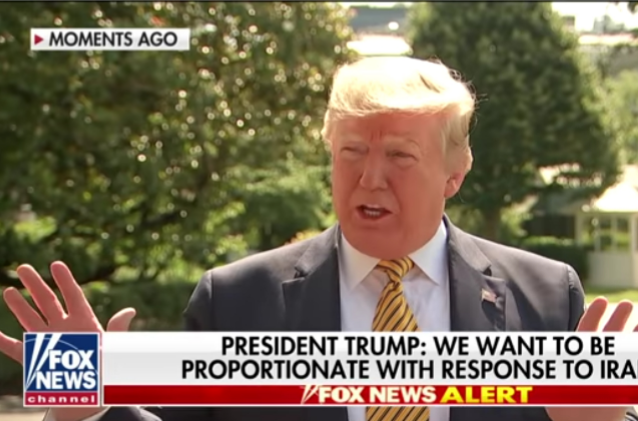 President Donald Trump is continuing with his policy of “maximum pressure” on Iran, promising “major” sanctions on the regime. “We’re putting additional sanctions on [Iran],” he told reporters before leaving for the Camp David. His administration was “moving rapidly” towards rolling out new sanctions, he added.

The announcement came two days after President Trump called off a possible military strike against Iran after the regime shot down a U.S. surveillance drone. The latest attack was part of a series of military provocations undertaken by Tehran. A Norwegian and a Japanese oil tanker were attacked in the Strait of Hormuz shipping lane late last week. The U.S. released footage and imagery showing Iranian Islamic Revolutionary Guard Corps’ (IRGC), a designated terrorist group, involvement in the attacks. Germany has concurred with U.S. intelligence, admitting there was “strong evidence” Iran carried out tanker attacks.

It remains unclear what new sanctions were on the table. But recent news reports suggest that the United States Treasury is preparing additional sanctions on Iran for money-laundering and terrorism financing. On Friday, Treasury Secretary Steven Mnuchin slammed Iran for failing “to address its systemic money-laundering and terrorist-financing deficiencies.” The U.S. Treasure and Financial Action Task Force, an Independent international body, have proposed sanctions and measures that would further Isolate Iranian banking and financial system.

The U.S. President left the door open for a diplomatic solution, promising a deal to “make Iran great again” if the regime abandons its nuclear ambitions.

U.S. President Donald Trump said Saturday he will impose additional sanctions on Iran in an effort to prevent Tehran from obtaining nuclear weapons, adding that military action was still a possibility.

Trump, who was speaking to reporters at the White House, made his comments after recently calling off military action against Iran to retaliate for the downing of a U.S. military drone.

“We are putting additional sanctions on Iran,” Trump said. “In some cases we are going slowly, but in other cases we are moving rapidly.”

The president said military action “is always on the table” against Iran.

The president’s tweet also echoed his remarks to the press:

Iran cannot have Nuclear Weapons! Under the terrible Obama plan, they would have been on their way to Nuclear in a short number of years, and existing verification is not acceptable. We are putting major additional Sanctions on Iran on Monday. I look forward to the day that…..

The European Union, mainly Britain, Germany, and France, are opposed to any further sanctions on Iran. Two weeks after German Foreign Minister visited Iran in a desperate attempt to coax the regime into sticking to the 2015 nuclear deal, a British Foreign Office Minister is heading to Tehran.

The diplomatic scramble began after Iranian President Hassan Rouhani threatened to flood the continent with drugs and refugees if Europe failed to deliver the economic perks promised under the Obama-era nuclear deal. “You are obliged,” Rouhani said addressing the Europeans, “for your own security, for protecting your youths against drugs as well as controlling influx of immigrants.”

Iran received billions of dollars for signing the 2015 nuclear deal. With President Trump pulling the U.S. out of the deal last May and snapping back the sanctions, the regime has seen its oil exports collapse, currency diminished, and economy take a nosedive. Fearing U.S. retaliation in the form of secondary sanctions, leading foreign players have divested from the country and major oil buying nations have refused buy from Iran. Tehran has set the July 7 deadline for Europeans to succumb to its economic demands.

I hope Trump has a plan because letting Iran blow up ships and drones deserves a serious response.

Iran, as bad-behaved as they are, is NOT invading us. Central America IS invading us. Priorities, Mr. President.

Perhaps we should start deporting invaders to Iran?

Let’s be clear, Iran deserves a beat down for far more than the drone.