“Regrettably, Harvard’s administrators acted in ways grossly antagonistic to the very norms that make Harvard the epitome of higher education.” 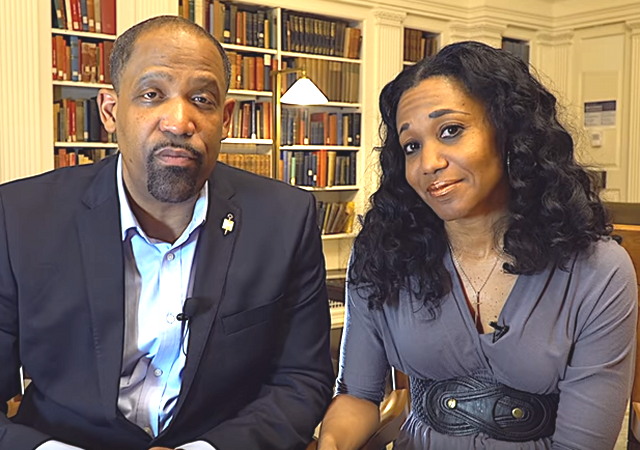 Harvard Law School professor Ron Sullivan Jr. and his wife Stephanie Robinson, who also teaches at the school, were removed from their positions as residential deans for Harvard’s Winthrop House this spring.

They were targeted by social justice warriors on campus who claimed they felt “unsafe” due to Sullivan’s decision to join the defense team of Harvey Weinstein, even though he dropped Weinstein when he learned the trial would conflict with his teaching schedule.

The school caved to the mob and removed Sullivan and Robinson from Winthrop House. Both still have their teaching positions and are now speaking out about this situation for the first time.

A Harvard Law School professor who was ousted as a faculty dean amid a campus uproar for working on the legal defense of Harvey Weinstein is speaking out publicly for the first time, saying the university abandoned the academic values that make it special.

Sullivan, in a new sharply worded YouTube video co-narrated with his wife, law professor Stephanie Robinson, says they are setting out to “help restore academic freedom, reason, discourse and honor at Harvard College.”

“When Harvard University, to which the entire world looks for leadership, abandons its commitments to academic freedom and open and unfettered debate, it undermines its responsibilities and its opportunities,” Sullivan says in the video posted Friday. “Regrettably, Harvard’s administrators acted in ways grossly antagonistic to the very norms that make Harvard the epitome of higher education.”…

“A university, it’s a place where bright young minds are supposed to learn the disciplines of framing and grappling with arguments and quite frankly, respecting and understanding the views of others,” Robinson says in the video.

“So when a place like Harvard pays insufficient attention to that vital work, it not only betrays the ambitions of the university and its students, but it quite frankly betrays our academic traditions.”

Harvard has been widely criticized for this decision, and for placating a campus mob. Last week, the ACLU joined the chorus of critics on their official blog:

Harvard Was Wrong to Dismiss Its Dean for Representing Harvey Weinstein

Last month, Harvard College Dean Rakesh Khurana announced that Ronald Sullivan, a professor in the law school, would no longer serve as faculty dean of Winthrop House, a residential dorm at Harvard. Sullivan was the first African American to serve as a faculty dean and had served in that role at Winthrop House for a decade. But when he chose to join the legal team defending Hollywood mogul Harvey Weinstein in his upcoming criminal trial on allegations of sexual assault, his decision sparked protests and sit-ins, as students demanded his ouster as dean. In the end, Harvard caved to the pressure.

The decision sacrificed principles central to our legal system.

There are some really smart people on this site. Can someone explain why we don’t see them make out a claim of tortious interference with contractual relations?

To make out a claim of tortious interference with contractual relations, a plaintiff must demonstrate that “(1) he had a contract with a third party; (2) the defendant knowingly induced the third party to break that contract; (3) the defendant’s interference, in addition to being intentional, was improper in motive or means; and (4) the plaintiff was harmed by the defendant’s actions.” Draghetti v. Chmielewski, 416 Mass. 808, 816 (1994) “[I]mproper conduct, beyond the interference itself, is ‘an element both in the proof of intentional interference with the performance of a contract . . . and in the proof of intentional interference with a prospective contractual relationship.’ ” Hunneman Real Estate Corp. v. Norwood Realty, Inc., 54 Mass. App. Ct. 416, 427 (2002), quoting from United Truck Leasing Corp. v. Geltman, 406 Mass. 811, 816 (1990)

The principle they support is sound – we see it every day in Public Defenders offices, mostly supported by tax dollars.

My guess is that this is the first time they got excited about this issue (don’t think he volunteered to defend the guy who killed a woman in Charlottesville) until multimillionaire Democrat super donor was involved.

Inquiring minds ask – how much was his retainer/contract to join the defense team? Why hasn’t any media done some journalism on that simple question?

Snowflakes demand a right to “feel safe”, then go out and join an anti-fa riot and see no contradiction.

Harvard is a pathetic institution worthless in every way.

The only thing a diploma from Harvard is good for today is wiping your arse after a healthy bowl twister.

To all employers out there, when you have a Harvard graduate apply forba job, summarily rejected them with a letter saying specifically thsy younwiuldnt hire a Harvard Grad if Peter Strozk or Robert Mueller was holding a gun to your head.