“They want to secure the right to force another person to operate against their wishes, particularly religious beliefs.” 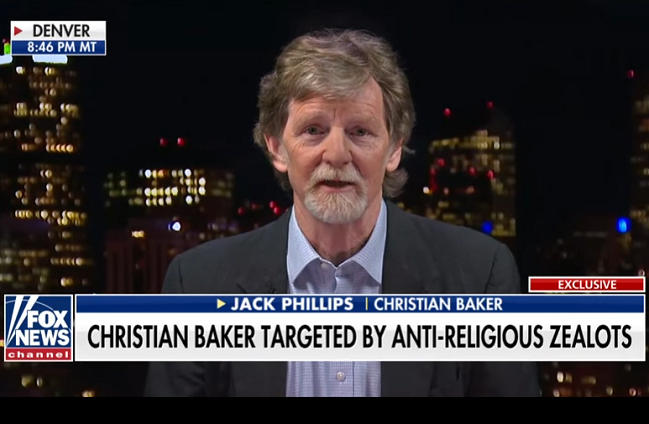 Masterpiece Cakeshop in Colorado is once again the target of a lawsuit.  This time, the family-run bakeshop is being sued not by Colorado but by the complainant, Attorney Autumn Scardina, in the dropped suit filed by the state.

Professor Jacobson provided a summary of the repeated attacks on this small business.

The second attempt by the State of Colorado to punish Jack Phillips and his Masterpiece Cakeshop has come to an end, once again, with a victory for the baker.

The baker also refused to create Halloween cakes and other cakes whose messages he viewed as religiously unacceptable. He didn’t refuse to sell to LGBT people, he just didn’t want to have to create the message. He won the case in the Supreme Court, mostly on procedural grounds with the court not reaching the larger constitutional issues of freedom of religion and freedom of speech (to avoid compelled speech).

Round 2 was when the State went after him because he refused to create a cake celebrating a transgender transition. We covered the lawsuit in Colorado goes after Masterpiece Cakeshop again – this time over “gender transition” cake:

On June 26, 2017, the very same day the Supreme Court agreed to take the Masterpiece Cakeshop case, Attorney Autumn Scardina called  the cake shop to request a “gender transition” cake. The cake shop declined, so on July 20, 2017, Scardina filed a complaint, with the Colorado Civil Rights Commission….

It appears that Colorado waited for the Supreme Court ruling in the wedding cake case, because it was not until June 28, 2018, that the Colorado Civil Rights Commission issued a finding of probable cause…

Round 3 now appears to be in progress: Scardina has now filed suit against the bakery and is seeking “damages on claims of Colorado Anti-Discrimination Act violations and deceptive and unfair trade practices.”

Three months after Colorado settled a discrimination case with the baker who refused to make a cake commemorating a gender transition, the transgender woman who was denied the cake sued the bakery herself.

In July 2017, Denver-based attorney Autumn Scardina asked Masterpiece Cakeshop owner Jack Phillips, a devout Christian, to bake her a cake. Phillips refused, according to Scardina’s lawsuit, because she is transgender.

In addition to violating her civil rights, Scardina claims the bakery falsely advertised “they would be happy to provide a variety of baked goods, including birthday cakes, to all members of the public, including LGBT individuals.”

Scardina says she attempted to commission a pink cake with blue frosting, telling a bakery employee “the requested design had personal significance for her because it reflects her status as a transgender female.” She says she was then told the cake shop did not make cakes for “a sex change celebration.”

. . . . In March, Phillips and the state agreed to drop their cases against each other. At the time, state Attorney General Phil Weiser said while he would no longer use state resources to investigate Phillips, Scardina was free to pursue her own lawsuit.

This is not about a cake, it’s not even about LGBT “rights,” it’s about, as Nicole Russell writing for The Washington Examiner notes, securing “the right to force another person to operate against their wishes, particularly religious beliefs.”

A third lawsuit, with slightly different details, but again accusing Phillips of discrimination, is an exercise in harassment, and demonstrates just how little Scardina and her supporters care about equality. Gays and lesbians can marry, people can transition to another gender and be accepted by society, and either event can be celebrated publicly, but it’s not enough for them. They want to secure the right to force another person to operate against their wishes, particularly religious beliefs.

How do I know? Because Phillips is not the only baker in the Denver area. There are likely dozens, maybe even hundreds, of bakers in Colorado who would willingly craft cakes specifically celebrating transgender transitions. Some would probably even do it for free, but that’s not the point.

It’s not about the cake. Scardina wants the religious Right to bend to the wishes of the progressive Left, even in the most benign spaces, like bakeries. They want to make an example of Phillips. A second lawsuit, Scardina hopes, will accomplish this goal.

This ongoing lawfare against a Christian baker and his small business seems to be ultimately, if not solely, part of the progressive left’s continued assault on the First Amendment.

Here is our previous coverage of the previous lawsuits filed against the bakeshop:

Both of which may be illegal discrimination (or may not be).

He is refusing to commemorate an event and/or behavior which is legal discrimination.

Exactly. He’s perfectly willing to make any cake for these customers, so long as it carries a message he approves of, or no message at all.

It doesn’t have to be about freedom of religion or freedom of association. If we are talking about a product that is a custom creation that is made only after a contract is signed, then we are talking about the Freedom to say No to an offer of employment – A person’s reasons for saying NO are totally irrelevant to one’s right not to be coerced into a job.

Not if he’s providing a public accommodation.

I admire Jack Phillips for standing up for his principles. I probably would have just told her I’d be happy to make her cake, and the price is $5000, payable in advance for a custom cake.

And then have an “accident” delivering it, one hour before the festivities

Then she’d find out what you’re charging other customers for the same work, and allege that you charged her more because of her sexual orientation.