Swamp creatures unhappy that the swamp is being drained. 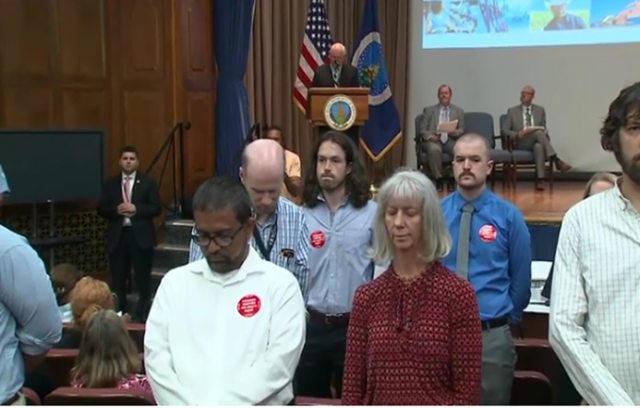 Members of the American Federation of Government Employees staged a protest over the announcement of relocation plans of two Agriculture Department research agencies.

The employees turned their backs on Agriculture Secretary Sonny Perdue during his review of the relocation plans.

Perdue announced Thursday that two of the Department of Agriculture’s research agencies, the Economic Research Service (ERS) and the National Institute of Food and Agriculture, will be relocated to be closer to major farming regions, according to Politico.

While Perdue has justified the relocation as a way to improve customer service and save taxpayers up to $20 million per year, some ERS employees have said it is a political move, according to the publication.

Specifically, some ERS staff have expressed suspicions the relocation is an attempt to shrink the agency and weaken its ability to conduct research that does not align with the Trump administration’s policy agenda.

In other words, the swamp creatures are unhappy that the administration has taken a step to drain the swamp.

On the other hand, representatives in both Kansas and Missouri are pleased with the developments.

A two-state proposal from Kansas and Missouri beat out 135 other bids to become new headquarters for the Economic Research Service (ERS) and National Institute of Food and Agriculture (NIFA), two of the USDA’s principal research agencies.

It’s a major win for policymakers in both states, who worked closely on a collaborative bid, and a sign that the long-term border tensions on economic development may be easing.

“It was a united effort, so that really helped,” Sen. Pat Roberts, R-Kansas, the Senate Agriculture chairman, said earlier in the week before the USDA officially selected Kansas City over other finalists, locations in North Carolina and Indiana.

“I am committed to ensuring we continue to support and strengthen the research mission that our US producers rely on. Kansas City is an obvious choice, as many other USDA agencies in the area partner closely with stakeholders,” Roberts said in a statement Thursday.

During his announcement, Perdue stressed that the relocation was a strategic, long-term decision for the USDA.

He touted Kansas City as a booming city with a strong agriculture sector and close proximity to land grant universities that work closely with [National Institute of Food and Agriculture (NIFA)], but he acknowledged the move would be difficult for some employees.

“I understand the decision creates personal disruption for some of you as well as your families,” he said.

The USDA will be pairing employees with relocation specialists to help the employees who choose to remain with the agency to navigate the move.

In a phone call with reporters, Perdue downplayed the backlash from employees and said current employees who don’t want to move to Kansas City employees will have opportunities to find other jobs in the federal government.

Many American taxpayers are applauding the move, and indicate the employees’ behavior was shameful.

Nothing ever happens to these people. For example, numerous employees of the Dept of Agriculture stood up and turned their backs on Sonny Perude when he annouced that some depts are being moved out of DC.If you did that to your boss in the private sector you’d be fired

More evidence the Swamp needs to be drained ASAP.

Identity and fire every bastard in that clip. And when the union howls tell ’em to pound sand. https://t.co/2duxKciCxX

Guess they don’t want to be near farmers, huh. No posh cocktail parties out here.https://t.co/WYXeS0LwQo

Look at the obnoxious and infantile antics of these bureaucrats. They’ve forgotten the “servant” part of the phrase “Public Servant,” and, they’ve forgotten who is paying their oversized paychecks.

Something is profoundly wrong when government workers evince such an attitude of adolescent entitlement. In the private sector, this stunt would’ve gotten them canned, and, rightfully so. But, of course, in government, there is never a scintilla of accountability demanded of the workers. Thus, their arrogance is totally enabled by their immunity from suffering any consequences.

Stealing appears to be the only firing offence at the post office. The union gets all upset and it’s members slow down if that is even possible.

By turning their backsides to him they were showing him their best (and only) attribute. It’s a name for a donkey and they are one.

Hey there you ERS and NIFA employees…Guess What..????

These professional government goof offs shouldn’t worry, KC is just as sophisticated and cosmopolitan a city as DC…
PLUS…KC has MUCH better BBQ….AND…KC has a MUCH, MUCH better pro football team !

If it’s not as sophisticated and cosmopolitan because the government isn’t there, well this is our effort to bring the sophistication of government out into America rather than keeping it all with DC.

They’re public servants after all, eager to serve. This provides them a new opportunity to serve more holistically.

This quite possibly the most ridiculous thing that I have ever heard.

If a government bureau, division or agency is not performing well, then disciplinary action can be taken against employees who screw-up or do not perform up to reasonable standards.

If the agency is bloated, reduce the staffing to a manageable level.

What you do not do is to strip the agency of experienced staff unnecessarily. Why, you ask? Because new hires have to be trained.

It’s actually easy enough to purge these agencies of some of the worst performers. Do a straight RIF. That will be last in / first out. Who are the last in? Obama appointees.

USE the civil service rules when they’re to your advantage. I wish Trump really wanted to reduce bloat, because he could take off a nice big slice and remove hardly any good people this way. “Gee I’m sorry we don’t have the money.”