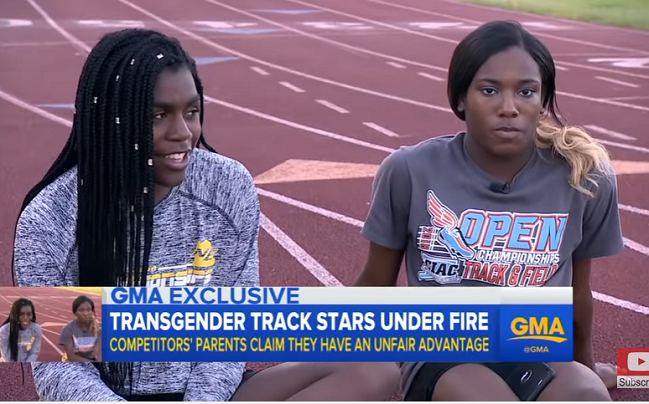 Back in February, I wrote about two transgender sprinters who placed first and second in the Girls Indoor Track Championship held in Connecticut.  As I noted at the time, the same two transgender athletes had won the top spots the year before, as well.

Three of the girls who competed in the track championship have now filed a federal discrimination complaint against a statewide policy on transgender athletes.

Three Connecticut girls who participate on high school track teams have filed a federal discrimination complaint against a statewide policy on transgender athletes, saying it has cost them top finishes in competitions and possibly college scholarships.

The conservative Christian law firm Alliance Defending Freedom filed the complaint on behalf of Selina Soule and two other minor girls Monday with the U.S. Education Department’s Office for Civil Rights. It seeks an investigation and actions to make competitions fair.

The ADF complaint centers on an alleged violation of Title IX in that the biological girls are being deprived of “opportunities for participation, recruitment, and scholarships.”

The conservative Christian law firm Alliance Defending Freedom filed the complaint on behalf of the girls Monday with the U.S. Education Department’s Office for Civil Rights. It seeks to reverse a Connecticut Interscholastic Athletic Conference rule allowing athletes to compete in sports corresponding with their gender identify.

The CIAC says its policy follows a state anti-discrimination law requiring students to be treated in school according to the gender with which they identify.

In its complaint, the ADF claims that allowing transgender girls to compete in girls sports deprives their cisgender (someone who identifies with their birth sex) peers of “opportunities for participation, recruitment, and scholarships” and therefore violates Title IX, which assures equal rights for male and female athletes.

For its part, the CIAC states that it believes the policy to be in full compliance with Title IX.

CIAC executive director Glenn Lungarini said Tuesday that the governing body had not been contacted by the Office for Civil Rights but would cooperate fully with any investigation. Lungarini defended the CIAC’s gender policy, noting that the organization reviewed the language with the Office of Civil Rights in Boston to ensure Title IX compliance and discussed the policy with Connecticut’s Commission on Human Rights and Opportunities.

“The CIAC is committed to equity in providing opportunities to student athletes in Connecticut,” Lungarini said in a written statement. “We take such matters seriously, and we believe that the current CIAC policy is appropriate under both Connecticut law and Title IX.”

The intersectional left is going to be forced to face a very real quandary: do they support protections for female athletes or don’t they?  No matter how much they want to normalize transgender identity or how loudly they insist that men can become women through surgery, medication, and wishful thinking, the fact remains that men are biologically men.  When they compete with biological women in most endeavors requiring athletic ability, they will win.  They do win.  All the time.

Unsurprisingly, all of the 2020 Democrat frontrunners support the Equality Act which includes forcing schools to permit transgenders to compete in sports against biological women.

Every Democratic presidential candidate polling above 1% supports a bill that would force schools to include male athletes who identify as transgender girls on female sports teams.

The Equality Act, which passed the House in May with unanimous Democratic support, amends the Civil Rights Act of 1964 to make “sexual orientation and gender identity” protected characteristics under federal anti-discrimination law.

The bill would force public schools to expand female athletic teams to include biological males who identify as transgender girls, as both critics and supporters of the bill have acknowledged. The bill comes as male athletes have racked up victories in female sports.

. . . . The top seven Democratic presidential candidates in RealClearPolitics’ running average of primary polls have all publicly endorsed the legislation.

Former Vice President Joe Biden, the frontrunner, said passing the Equality Act would be his top legislative priority if elected.

Slap the word “equality” on something designed to harm one of their identity groups, and they’re thrilled to support it . . .  without, apparently, giving it any thought at all.

In the world of intersectionality, there are always winners and losers, and it looks like, for the time being at least, women are losing the transgender war on women.

Thursday’s response from “chicks with dyx” and the ACLU in The Hartford Courant.

So-called “transgender women” athletes (i.e., males competing against females) reminds me of the Seinfeld episode where Kramer gets into martial arts, and is kicking butt. . . only to be revealed as a 6-foot tall, adult participant enrolled in a children’s karate class.

What does it take to be transgender? According to this bill, merely identifying as transgender is enough. This is great for women. Any mediocre male high school athlete can compete against the women and get the available college athletic scholarships.