“It sure doesn’t feel worse than when I grew up in Jim Crow Alabama. So let’s drop this…” 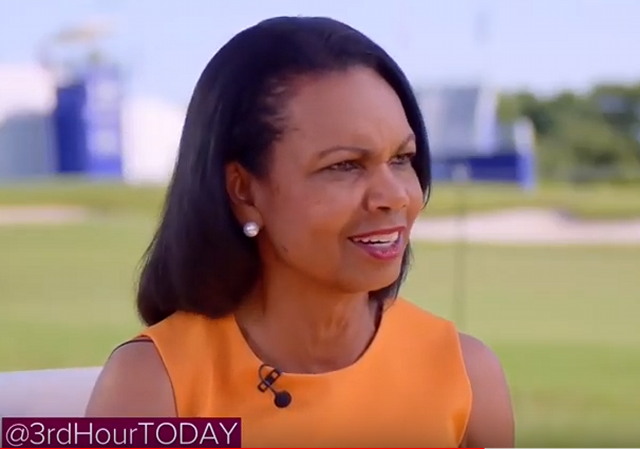 Condoleezza Rice was interviewed on the Today Show this week and discussed a variety of topics, including her experiences as a black woman growing up in a very different America.

At one point, NBC host Sheinelle Jones seemed to try to steer Rice into talking about the idea that race relations in America are worse under Trump, but she was having none of it.

Former Secretary of State Condoleezza Rice made it clear that she doesn’t think racism in America has gotten “worse” under President Trump, calling the claim “hyperbole” on Thursday during an interview on NBC’s “Today” show.

NBC News’ Sheinelle Jones told Rice “there are people who will say it feels worse now when we’re talking about race” and said others feel that America is currently a “divisive environment.”

Rice quickly responded, “It sure doesn’t feel worse than when I grew up in Jim Crow Alabama. So let’s drop this notion that we’re worse race relations today than we were in the past.”

“I think the hyperbole about how much worse it is isn’t doing us any good,” Rice continued. “This country’s never going to be colorblind. We had the initial original sin of slavery. It’s still with us.”

Cameron Cawthorne of the Washington Free Beacon has more:

Jones followed up by asking her about people who say the rhetoric starts with the president and he has to set an example from the top-down.

“Oh, come on, alright? I would be the first to say we need to watch our language about race. We need to watch that we don’t use dog whistles to people who—but when we start saying, ‘It’s worse today,’ No it’s not,” Rice said.

Rice is a leader who has always succeeded on her own terms as an individual rather than embracing identity politics. Her comments during the recent KPMG Women’s Summit reinforced this.

Condoleezza Rice says if you are prepared, people will accept women as leaders

When Condoleezza Rice entered the top tier of government in 1989 as a national security adviser, she said she still often received stares as if she had just walked into the wrong meeting.

“But if you are prepared, then pretty soon others will recognize that you are ready for any room,” she told 350 attendees of the KPMG Women’s Leadership Summit, hosted by the accounting giant on Wednesday at the Hazeltine National Golf Club.

Rice, who served two presidents and became secretary of state under President George W. Bush, was one of several top leaders and CEOs speaking at the summit held as part of the KPMG Women’s PGA Championship happening this week at the course in Chaska.

She grew up in segregated Birmingham, Ala., where a church bombing killed her childhood friend and three other black girls. “My parents said, ‘You have to be twice as good. You have to work twice as hard, and be twice as confident,’ ” she said.

She certainly followed that advice well.

It was better under Bush than Obama, who did what he could to stir things up again.

The irony of the black reporter interviewing the former black Secretary of State, the reporter sitting in a $1,000 dress ensemble with a camera crew at her command, making over $200,000 per year, complaining about how race has made it so difficult is totally lost on her.
Pathetic.

Race relations are worse today than they were on 2008. In 2008, white supremacist organizations were all but extinct, in this country. KKK meetings usually had more undercover FBI agents in attendance than KKK members. Racism was revitalized, on the part of the minority race baiters, during the Obama Administration, with the connivance of Obama himself. So, now we have have an upsurge in minority racism which has stimulated a revitalization of white majority racism. Thank you Barry Soetoro.

Race relations are worse today than 10 years ago. Thanks to Obama and the progressive movement who wants anybody who isn’t a white male to be a victim.

I always thought the Republicans should seek this woman out as a candidate. She hits all the bells. She’s smart, a woman, a POC, with no real dirt in the closet. Glad A, I’d vote for her.