“After we take that totality of facts, it became clear to me and our command staff that this was neglect of duty.” 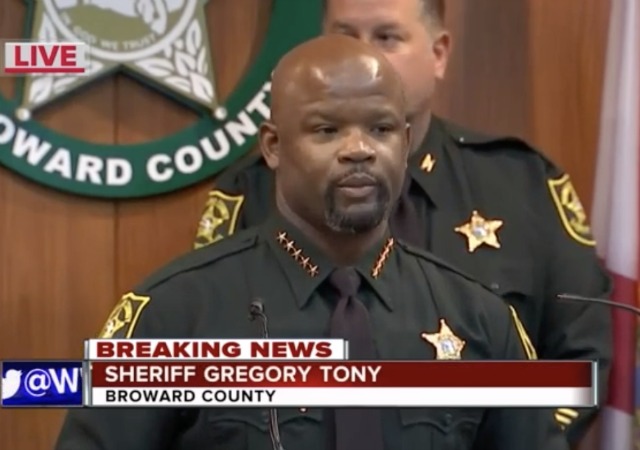 Broward County Sheriff Gregory Tony announced on Wednesday that the department fired two more deputies for their inaction during the Marjory Douglas High School shooting in Parkland, FL, last year now that they have finished their internal affairs investigation.

The department fired four deputies over the shooting.

Sheriff Tony said seven deputies were the subject of the internal affairs investigation, and four of them were fired:

No disciplinary action was taking against the other three deputies. Sheriff Tony said Eason and Stambaugh were fired Tuesday. Peterson and Miller were previously fired in the case.

“We spent a lot of time looking at our policy and looking at the actions, looking at the statements provided by the deputies involved,” Sheriff Tony said at a news conference. “After we take that totality of facts, it became clear to me and our command staff that this was neglect of duty. And it was one of the most severe consequences. We lost 17 people.”

Peterson faces 11 charges, including “seven counts of neglect of a child, three counts of culpable negligence, and one count of perjury.” The file against Peterson found that he “did absolutely nothing to mitigate the MSD shooting.” Peterson also told arriving law enforcement to stay 500 feet away from the school.

Sgt. Brian Miller arrived and heard four shots. Instead of helping the kids, “he took time to put on his bulletproof vest and hid behind his car” and did not go “on the radio for 10 minutes.”

From The Sun Sentinel:

Stambaugh, who was assigned to the Sheriff’s Tamarac district, was working an off-duty shift at a nearby school when he responded to reports of shots fired at Stoneman Douglas. He got out of his truck, strolled to the back to put on his bulletproof vest and then took cover for about five minutes after hearing the shots, according to body camera footage. His next move was not into the school, but instead to get back into his truck and drive to a nearby highway. That trip took over five minutes and thirty seconds, a state commission investigating the law enforcement response found.

Eason ran the other way as gunfire blasted, then wasted precious time fiddling with his bulletproof vest and body camera while students were dying, investigators said.

Eason, who was assigned to the Parkland district, had also been faulted for not writing an official report after receiving a tip in February 2016 that the school shooter, Nikolas Cruz, was making threats on social media to shoot up a school.

Four abject failures out of the seven examined is a catastrophically high percentage, implying a systemic command problem.

What failures are you talking about?

Muh unions will never allow it.