Rep. Rashida Tlaib Falsely Claims Palestinian Arabs Created “a Safe Haven” for Jews During and After The Holocaust

Rep. Rashida Tlaib Falsely Claims Palestinian Arabs Created “a Safe Haven” for Jews During and After The Holocaust

Jeff Jacoby: “No, @RashidaTlaib, Palestinian Arabs did not provide “safe haven” for Jews. They assaulted & murdered Jews, urged on by their leader, Haj Amin al-Husseini, an admirer and ally of Adolf Hitler.” 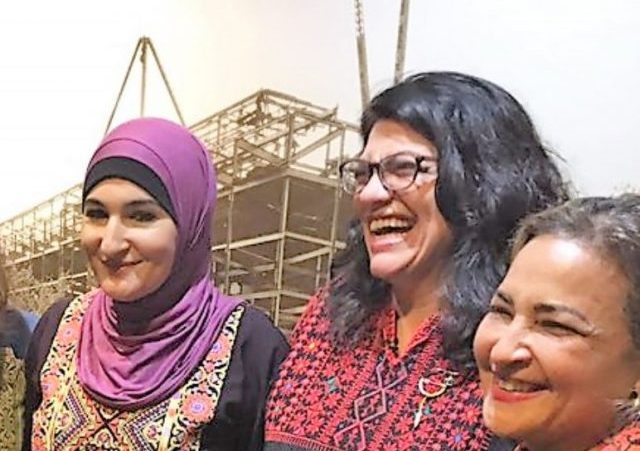 “There’s always kind of a calming feeling I tell folks when I think of the Holocaust, and the tragedy of the Holocaust, and the fact that it was my ancestors — Palestinians — who lost their land and some lost their lives, their livelihood, their human dignity, their existence in many ways, have been wiped out, and some people’s passports. And just all of it was in the name of trying to create a safe haven for Jews, post-the Holocaust, post-the tragedy and the horrific persecution of Jews across the world at that time. And I love the fact that it was my ancestors that provided that, right, in many ways. But they did it in a way that took their human dignity away and it was forced on them.”

One of the first to report on Tlaib’s comments, Phillip Klein of The Washington Examiner observed, “Tlaib’s claims that her Arab ancestors provided a ‘safe haven’ to Jews after the Holocaust ignores the Jewish presence in the region and efforts to establish a Jewish state that predated the Holocaust, ignores that her ancestors allied with Hitler at the time of the Holocaust, and ignores decades of violence and terrorism directed at Israel both before, during, and after the Holocaust.”

That the Arabs living in pre-state Israel (who would have called themselves “Arabs,” not “Palestinians,”) welcomed Jews is an inversion of the historical record. The Mufti of Jerusalem Mohammed Amin al-Husseini, a Nazi sympathizer, organized pogroms against the Jews and brought pressure on the British to prohibit Jewish immigration to what was then called Palestine, which condemned millions to death.

Tlaib’s blatant historical inversion is an attempt to not just to deny the history, but to cast Palestinians as victims of not just the Europeans, but of the Jews too. It is common for the Palestinians to engage in Holocaust denial. Palestinian Authority President Mahmoud Abbas received his PhD for a paper alleging collaboration between the Zionists and the Nazis.

Other frequent claims made by the Palestinians are that they shouldn’t be dispossessed because of the sins of the Europeans and that the Holocaust wasn’t as bad as advertised. (No these claims are not consistent.)

Tlaib’s assertion is that the Jews given protection by the Palestinians then betrayed them and stole their land.

In 1929, Palestinian Arabs broke into the yeshiva in Hebron, murdering every student they found there. Then they lynched Jews in the streets. When the town's rabbi tried to shelter frightened Jews in his home, the Arab mob attacked and killed him and his family. pic.twitter.com/QPLLfGeqcW

Most notorious was the Palestinian Arab leader Husseini, who met w/ Hitler in Berlin and traveled to Bosnia to recruit volunteers for the Waffen SS. "The Arabs were Germany's natural friends," Husseini told the führer, "because they had the same enemies" – especially Jews. pic.twitter.com/3LqMiW8bAO

Here's a dose of reality for you, @RashidaTlaib https://t.co/8Vwm51tmG3

Many Arab leaders of Mandate Palestine collaborated with the Nazi regime and via their opposition to *any* Jewish immigration & *any* compromise—to include a “two state solution” first proposed in 1937—ensured the deaths of countless Jews. https://t.co/UnBIPaZNNH

The Jerusalem Post’s Seth Frantzmann accused Tlaib of turning “history on its head,” and pointed out:

There were Palestinian Arab leaders who sought reconciliation and coexistence. Fakhri Nashashib, who was assassinated by Husseini’s agents, had good relations with Jews in British Palestine. His funeral was attended by Sephardi Chief Rabbi Ben-Zion Meir Hai Uziel, Yitzhak Ben-Zvi, Moshe Shertok and former Jerusalem mayor Daniel Auster. But in general, the voices that might have created a safe haven were either drowned out, ignored or assassinated by extremists.

In an excellent essay for The Federalist, David Harasanyi, wrote:

President Trump joined the criticisms of Tlaib, observing that “She obviously has tremendous hatred of Israel and the Jewish people. Can you imagine what would happen if I ever said what she said, and says?”

But once Trump joined in the criticisms, the news was no longer about Tlaib’s reprehensible comment, but about the reaction to it as this article in The Hill attests:

President Trump on Monday accused Rep. Rashida Tlaib (D-Mich.) of harboring “tremendous hatred of Israel and the Jewish people” in response to comments she made about the Holocaust.

Later, after quoting several other Republicans, including Rep. Steve Scalise and Rep. Liz Cheney, The Hill reported “Tlaib has stood by her comments, saying on Sunday that Republicans are trying to ‘ignite vile attacks’ against her by taking her comments about the Israeli-Palestinian conflict ‘out of context.'”

The Hill article made no attempt to critique the falsity of Tlaib’s comment,s but turned the scandalous remarks into a partisan controversy instead of placing the blame where it belonged: on a Congresswoman who engaged in Holocaust revisionism if not outright denial. If a European public figure had said something comparable, that person would have been rightly ostracized.

Can anyone imagine if a German said he or she was very proud of how her ancestors welcomed Jews after the Holocaust?

This is exactly what @RashidaTlaib is saying with her comments. It is nothing short of Holocaust denial.

It’s astonishing that Tlaib gets off on this after engaging in an anti-Semitic smear back in January.

But Rep. Tlaib, like fellow freshman Rep. Omar, continues to be protected.

What does her last sentence mean/ about whom is she referring with “they” ? “But they did it in a way that took their human dignity away and it was forced on them.”

I used to live in Uraga. a town where the shipyard built ships like this. I provided input on the Hayabusa fast attack, craft.

Because the NORKs p’d me off.

I see the Japanese naval ensign, the Akebono, see a friend.

I could tell you how I contributed to the mighty capabilities of the Japanese Aegis destroyers but it’s still classified.