Amash: “Impeachment, which is a special form of indictment, does not even require probable cause that a crime (e.g., obstruction of justice) has been committed; it simply requires a finding that an official has engaged in careless, abusive, corrupt, or otherwise dishonorable conduct” 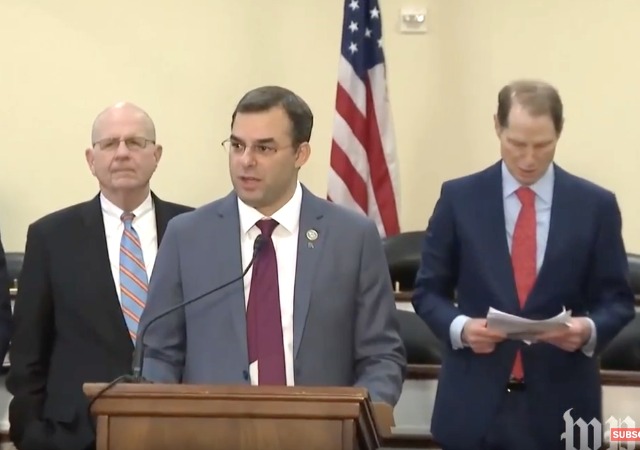 One of the first and most vocal #NeverTrump members of Congress, Rep. Justin Amash (R-MI) is now making headlines as “the first Republican” to call for President Trump’s impeachment.

So far, there is no indication at all that he is “first,” it seems more likely he is the “lone” Republican making such a call.  Even Senator Mitt Romney (R-UT) stated Sunday that the case for impeachment “just isn’t there.”

Amash, whose libertarian views often put him at odds with Trump and his fellow Republicans, posted a series of tweets Saturday afternoon outlining positions that even some Democrats have been unwilling to embrace — an extraordinary development that comes as Democratic leaders face increasing pressure from progressives to launch impeachment proceedings.

“Contrary to Barr’s portrayal, Mueller’s report reveals that President Trump engaged in specific actions and a pattern of behavior that meet the threshold for impeachment,” Amash wrote, arguing that lawmakers have become too afraid of using impeachment to deter presidential misconduct.

“Impeachment, which is a special form of indictment, does not even require probable cause that a crime (e.g., obstruction of justice) has been committed; it simply requires a finding that an official has engaged in careless, abusive, corrupt, or otherwise dishonorable conduct,” Amash wrote.

Here are my principal conclusions:
1. Attorney General Barr has deliberately misrepresented Mueller’s report.
2. President Trump has engaged in impeachable conduct.
3. Partisanship has eroded our system of checks and balances.
4. Few members of Congress have read the report.

Needless to say, the president is not happy.

….he would see that it was nevertheless strong on NO COLLUSION and, ultimately, NO OBSTRUCTION…Anyway, how do you Obstruct when there is no crime and, in fact, the crimes were committed by the other side? Justin is a loser who sadly plays right into our opponents hands!

Nor is Republican leadership.

“Those who know Justin Amash, this is exactly what he wants. He wants to have attention,” McCarthy said in an interview on Fox News Channel’s “Sunday Morning Futures.”

McCarthy also took aim at Amash’s record as a lawmaker.

“I think he’s only asked one question in all the committees he’s been in,” McCarthy said. “He votes more with [House Speaker] Nancy Pelosi than he ever votes with me.”

“It’s sad to see Congressman Amash parroting the Democrats’ talking points on Russia. The only people still fixated on the Russia collusion hoax are political foes of President Trump hoping to defeat him in 2020 by any desperate means possible,” said RNC Chairwoman Ronna Romney McDaniel.

In fact, most of Amash’s fellow #NeverTrump pals in Congress have yet to comment on his assertion.  Romney, however, stated on Jake Tapper’s State of the Union Sunday that the case for impeachment “just isn’t there.”

"I think a number of things that were done [by @realDonaldTrump] were really, really troubling."@MittRomney expresses concern, but won't join @JakeTapper in saying Trump has disgraced the presidency with his actions spelled out in the Mueller report. pic.twitter.com/02UQptCtnj

Born in Michigan, ethnically Amash is an Arab. He’s the son of a Palestinian Christian father and a Syrian Christian mother.

In the cauldron of hate that is the Middle East such people often make common cause with Muslims despite religious differences. What do we suppose his reaction might be to Trump’s affection for Israel?

Nah, Palestinian Christians are for the most part pretty tame on Israel.