Omar continues to play the “woman of color” card to try and silence her critics, but Pence has made it clear that he’s not backing down 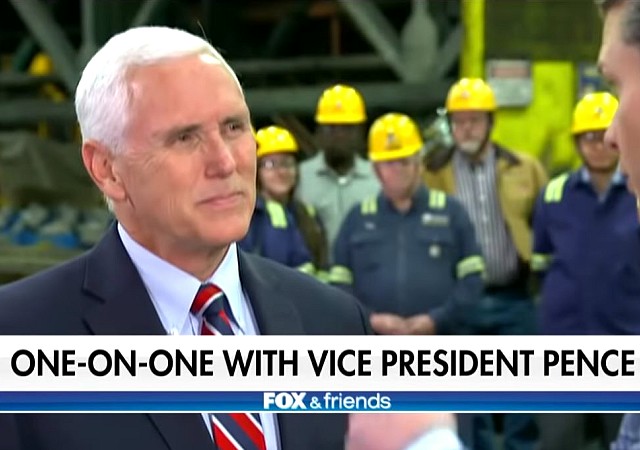 Vice President Mike Pence was in Democratic Rep. Ilhan Omar’s home state of Minnesota on Thursday and while there, he took the opportunity to renew his call for the freshman Congresswoman to be removed from the House Foreign Affairs committee.

On a segment of “Fox and Friends” that aired Friday, Pence noted she “has made statements, anti-Semetic comments, statements against our most cherished ally Israel that ought to be rejected by every American.”

Pence also again took her to task for her recent attempts to blame America’s foreign policy for the humanitarian crisis and human rights abuses taking place in Venezuela.

Rep. Omar had asserted last week in an interview with the far left “Democracy Now!” program that the United States’s policies have had a “bullying” effect on the Venezuelan people:

You know, I mean, a lot of the policies that we have put in place has kind of helped lead the devastation in Venezuela. And we’ve sort of set the stage for where we’re arriving today. This particular bullying and the use of sanctions to eventually intervene and make regime change really does not help the people of countries like Venezuela, and it certainly does not help and is not in the interest of the United States.

“Frankly, the fact that very recently she’s been trying to blame the United States of America for the deprivation and the poverty brought on by the dictatorship in Venezuela, it tells me – look, the people of Minnesota will decide whether or not she remains in Congress. But Congresswoman Ilhan Omar has no place on the House Foreign Affairs Committee, and the Democratic leadership ought to remove her.”

Watch the interview below:

His Thursday criticism of Omar’s stance on the Venezuelan crisis follows a tweet he posted last week saying she was effectively supporting socialism over freedom:

As Venezuelans take to the streets to stand for their freedom against an oppressive dictator, Democrat Congresswoman @IlhanMN chooses socialism over freedom. The Trump Administration stands with the freedom-loving people of Venezuela. https://t.co/UYiPLPvKl5

And last Friday, he told Fox News that Omar “doesn’t know what she’s talking about” when it comes to American foreign policy, and he elaborated:

“Nicolás Maduro is a socialist dictator who has taken what was once one of the most prosperous nations in this hemisphere and brought it literally to a level of deprivation and oppression and poverty that we have never seen,” Pence said of the Venezuelan president. “That’s not a result of U.S. policies.”

Omar is, of course, responding to Pence and other Republicans who have called her out over her repeated use of anti-Semitic tropes as well as her statements about Venezuela by trotting out the tiresome “progressive woman of color” card in an effort to silence them:

Women of color have heard this before. Instead of "we disagree," it's "she doesn't know what she's talking about." They have to make us feel small.

This from an Administration that thinks climate change is a Chinese hoax. https://t.co/8ZaHfY4hfH

Why does Omar continue to hold a seat at the vitally important House Foreign Affairs Committee table despite her reprehensible anti-Semitic positions and her ill-informed beliefs regarding Venezuela? Democrats haven’t said, but I suspect there are a couple of key reasons behind it:

1) Considering how she’s quick on the draw against even members of her own party when she feels she’s been attacked over her actions or words, keeping her there may be the party’s attempt at appeasing her and containing her rage

2) Omar’s views on Israel and Venezuela are not fringe views within her party. Many of her Democratic colleagues either outright agree with her, believe she merely needs to moderate her tone, or are willing to tolerate her for the sake of “diversity” and all that.

Pence, on the other hand, isn’t playing around.

Back in February during the backlash over her various anti-Semitic remarks, he first made the call for her to be removed from the Foreign Affairs Committee:

On Rep. Omar's Israel lobby tweets, VP Pence tells @mitchellreports: "Anti-Semitism has no place in the United States Congress, or anywhere in our country or the free world … At minimum, Democrat leaders should remove her from the House Foreign Affairs Committee." pic.twitter.com/4rGFqS1vGZ

From that interview with Andrea Mitchell:

VICE PRESIDENT MIKE PENCE: Well, Representative Omar’s tweets were a disgrace. Anti-Semitism has no place in the United States Congress or anywhere in our country or the free world. I think it was right for Democrat leaders to condemn those remarks but I think it’s important that people that articulate anti-Semitic views are also held accountable. The Republican leadership was right to condemn Steven King’s remarks and also to remove him from the committee.

There were consequences to what he said, and unless Representative Omar resigns from Congress, at minimum Democrat leaders should remove her from the House Foreign Affairs Committee. I served on that committee for more than a decade Andrea, one of the things that always united that committee was strong support for our relationship with Israel and a strong condemnation of anti-Semitism.

The truth is anti-Semitism is not just wrong, it’s dangerous and Polish Jews during the Nazi occupation experienced that in one of the darkest chapters in human history. I’ll be at the Warsaw ghetto tomorrow, my wife and I will pay our respects at Auschwitz on Friday. It’s important that the leaders in the Congress take a firm stand against anti-Semitism rhetoric and I think it requires consequences in this case.

In spite of Omar’s best shutuppery efforts to silence her political opposition, Pence made it clear then—and is making it clear now—that he’s not going to back down.

Isn’t she a newbie to Congress, and a relatively young individual with little real-world experience in foreign affairs? Who thought it was a good idea for her to be on the Foreign Affairs Committee, and why?

(Who used the Anwar brothers for his IT)