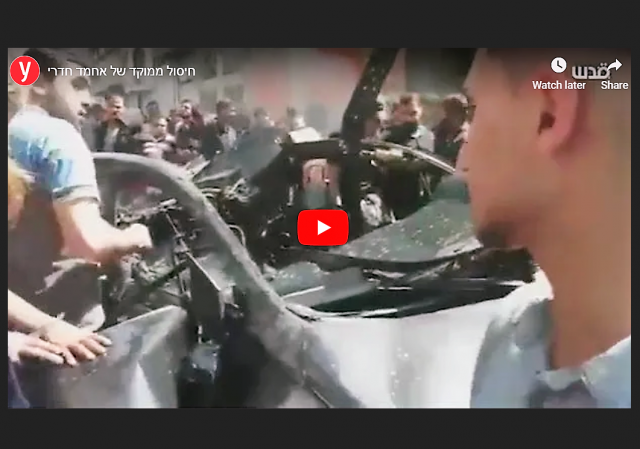 Homes and the maternity ward of a hospital have been hit, among other civilian locations in Israel. Hamas and Islamic Jihad are threatening to expand the rocket fire to Tel Aviv, Jerusalem, and even further north.

#breaking #video evacuating the maternity eard of Barzilai Medical center in Ashklon. Seconds later the building was hit by a rocket. Damage was caused. All babies mothers and patients are ok. pic.twitter.com/dvsvx6hKwM

Since the rocket fire started on Friday, Israel had limited retaliation to empty buildings, both terrorist and mixed use (only after warning was given to the civilians to evacuate).

It didn’t work at stopping the rocket fire.

(added) Hamas has built up an extensive and long-range rocket arsenal, as this Haaretz graphic explains: 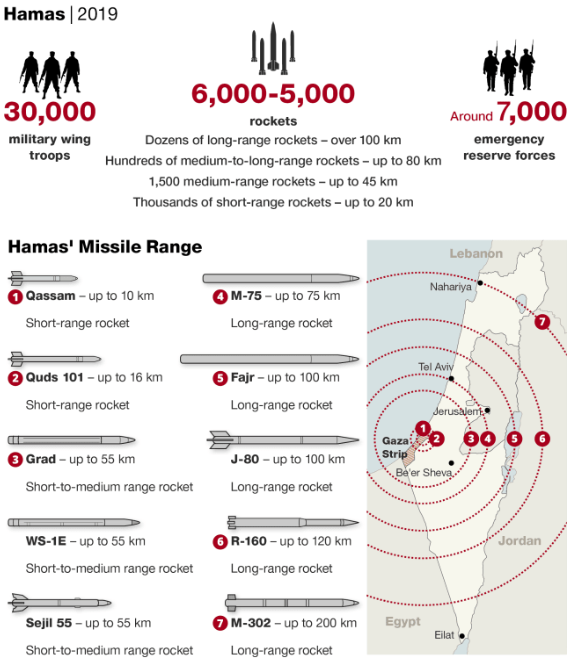 Israel appears ready to stop playing this empty-building game. A senior Hamas commander, responsible for the transfer of Iranian cash to terror groups in Gaza, has been killed in a strike on his car as it was driving through Gaza city. The terrorist has been identified as Hamed Ahmed Khudari (also spelled, Ahmed Abed Khudari, Hamed al-Khoudary, Hamed Hamdan El Hadary). 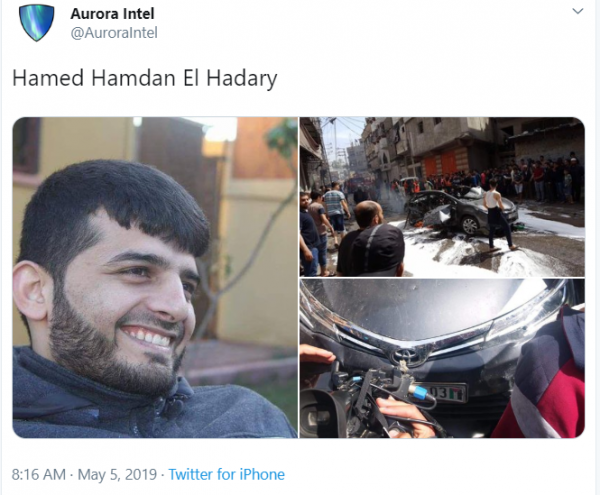 Israeli forces killed a senior Hamas terrorist Sunday who had been responsible for smuggling Iranian cash into the Gaza Strip, an IDF spokesperson said in a statement.

Hamed Ahmed Abed Khudari, 34, was eliminated in an Israeli airstrike Sunday afternoon, as part of a large-scale Israeli retaliation against a massive wave of rocket attacks from the Hamas-ruled Gaza Strip.

Khudari, 34, was the owner of a money-changing company which had been declared a terrorist group in 2018, and had smuggled large amounts of cash from Iran to Islamic Jihad and Hamas, providing the cash-strapped terrorist groups with much-needed foreign currency.

“A short while ago, Hamed Ahmed Abed Khudari,” an IDF spokesperson said, “was killed in a joint IDF and ISA operation. Khudari was responsible for substantial cash transfers from Iran to terror organizations operating within the Gaza Strip.

The IDF is not being shy about claiming credit for the targeted killing, tweeting:

Transferring Iranian money to Hamas & the PIJ doesn’t make you a businessman. It makes you a terrorist. 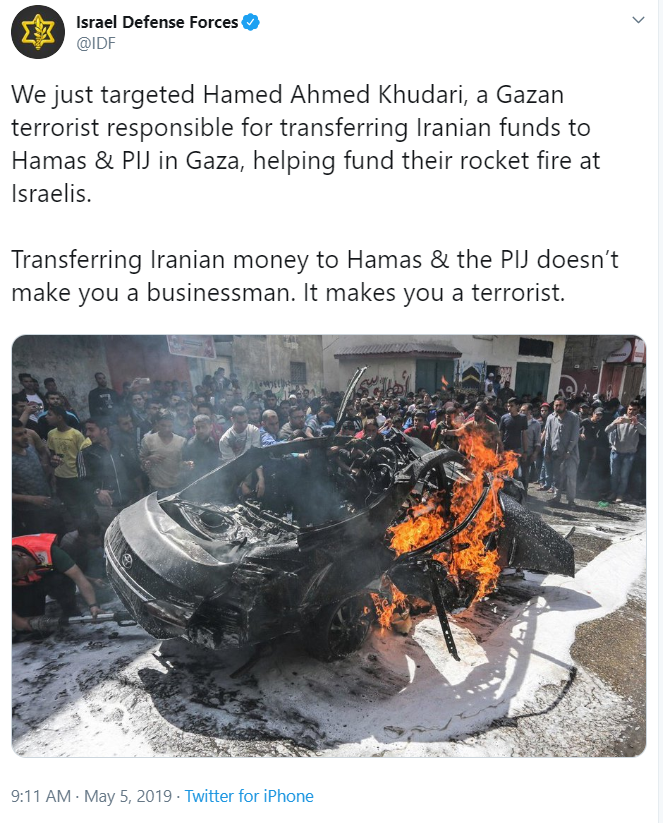 Israeli has not used targeted killings in several years. It appears that has changed, and the rocket barrage has finally caused Israel to take the gloves off. The Hamas-aligned Shehab News Agency posted this video of an unidentified man on a motorcycle being targeted. 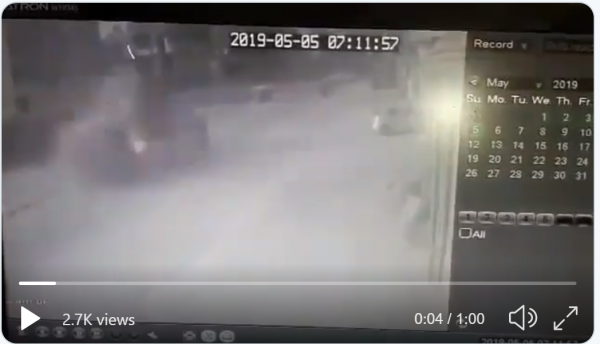 We will continue to update events as they take place.

The IDF just released video of the targeting:

PRECISION STRIKE: Earlier today, we targeted Hamed Ahmed Khudari in Gaza. He was responsible for transferring Iranian money to Hamas and Islamic Jihad. The funds were used to build the hundreds of rockets recently fired at Israel. Iran will need to find a new money man in Gaza. pic.twitter.com/2mv1oXLaB7

I know that we can expect both swift and strong condemnations of these attacks and the underlying supremacist and totalitarian ideology of hate that commands them, and, unequivocal endorsements of the right of Jews to live in peace and without fear of attack, in their ancestral homeland — from all of the leading Dhimmi-crat candidates for the Dhimmi-crat nomination for President, right?

I’m sure the statements will be piling up, any minute, now, such is the vaunted moral probity and clarity possessed by the Dhimmis.

Surrendering the Gaza to the Arabs was one of the worst mistakes Israel has ever made. Israel should retake the Gaza and save many, many lives on both sides of the issue.

What do you do with the Gazooks? That’s the problem you have if you take over Gaza. And the Israelis know it.

“…and the rocket barrage has finally caused Israel to take the gloves off.”

Well, no. When the gaza terror strip is a smoking pile of rubble we’ll know the gloves came off. Any response to a group intent upon destroying you while making an attempt to do so that falls short of that is idiotic and dangerous. As we always see, there is going to be a next time when the enemies of Israel will kill some more of its citizens.

So,,,did the Palis warn with ‘roof knocks’ that they’d be bombing a maternity hospital in Ashklon? I’m going to guess…no. Where’s the world condemnation?

Yo Bibi! Take the freekin gloves off and stop these stoopit roof knock techniques. Take out a city block of where the missiles are launched from, be it schools, hospitals, daycare centers, etc.

You’re going to get blamed for any military action anyway, so why play nice? it’s your duty to protect Israel so DO IT!! Enough of this bovine excrement. Take the bastards OUT!!

“It is well that war is so terrible – otherwise we would grow too fond of it.”
Statement at the Battle of Fredericksburg (13th December 1862) by Robert E Lee.

It’s time Israel stopped letting the Palis be so fond of war. Make it terrible so they understand.

Perfect quote. One I know but had forgotten about. The precise problem the Israelis have. The corrupt terrorist Palestinians need to experience war and retribution at its worst.

I’m with you, and glad that there are more conservative folks from RI than the polls, and current crop of politicians, would lead one to believe. But today with social and mainstream media stacked against doing the right thing, it must be a tough call.

I think Bibi gets one shot and he’s saving it for Iran. If he moves too forcefully against Hamas he’s screwed. He may have to save it all for the big target because once he gives the go-ahead he’ll be finished politically – at least in the court of public opinion, which seems to be the supreme court of the planet these days.

PS: As a former RI-er I was tempted to reach out and ask a Rabbi that lives here in the south (and comes from Cranston) if there is a prayer – a brucha – for a dead terrorist. I chickened out, realizing he would think I was meshugge and I’d end up on yet another watch list. Perhaps someone on LI knows one. Short of a Dead Terrorist brucha there is always “Hallelujah!”

I should think that it’s always proper to offer a short prayer to God, however you pray to Him, thanking him for a little bit of justice in the world.

The bracha after the megillah seems appropriate.

Come on, which antisemite downvoted that?

Give that man a cigar.