“Hamas no longer has cyber capabilities after our strike” 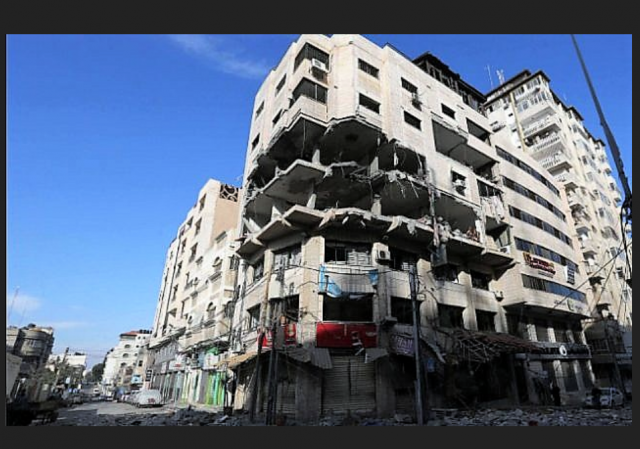 There appears to be a ceasefire, or at least pause in fighting, in the current Gaza conflict.

Israel retaliated with attacks on terror installations, mostly empty buildings, with the exception of a targeted hit on the Hamas commander who coordinated Iranian funding. Anti-Israel congresswomen Ilhan Omar and Rashida Tlaib both blamed Israel for the conflict.

There are many recriminations in Israel that Israel did not take more forceful action to topple Hamas and other terror groups. This does appear to fit a pattern whereby Hamas uses rocket fire and other attacks (such as the violent border riots controlled by Hamas) to extract concessions from Israel.

Why would Israel seemingly capitulate to this extortion-by-rocket? I have a strong feeling that Israeli Prime Minister Benjamin Netanyahu is keeping his eye on the larger ball, which is Iran and Hezbollah in the north, and didn’t want to get bogged down with Hamas and Islamic Jihad in the south.

This view is supported by the announcement that the U.S. is increasing both land- and sea-based military assets in the Persian Gulf region anticipating an Iranian or Iranian-proxy attack on U.S. and allied forces as oil sanctions cripple the Iranian economy. The Gaza conflict, in which the Iranian-controlled Islamic Jihad played a key role, likely was an Iranian diversion to keep Israeli military assets tied down during the bigger conflict to come.

Netanyahu didn’t take the bait. Only time will tell if this was the right decision.

During the rocket attacks, Hamas launched a cyber attack on Israel. We don’t know the details of what they were attacking, but it likely was much more important than defacing websites. Israel not only stopped the cyber attack with its own cyber assets, but launched an attack on the building in which Hamas’ cyber command was located.

The Israeli military said its soldiers thwarted a cyber attack by the Hamas terror group over the weekend, without elaborating on the nature or target of the offensive.

The Israel Defense Forces said once the digital threat was neutralized, fighter jets destroyed the building housing the headquarters of the terror group’s cyber unit.

The commander of the IDF’s Cyber Division, who can only be identified by his rank and first Hebrew letter of his name, Brig. Gen. “Dalet,” would only say that the cyber attack occurred Saturday and was aimed at “harming the quality of life of Israeli citizens.”

The military said much of the information about the attempted attack cannot be published as it might reveal to Hamas details about Israel’s cyber capabilities. 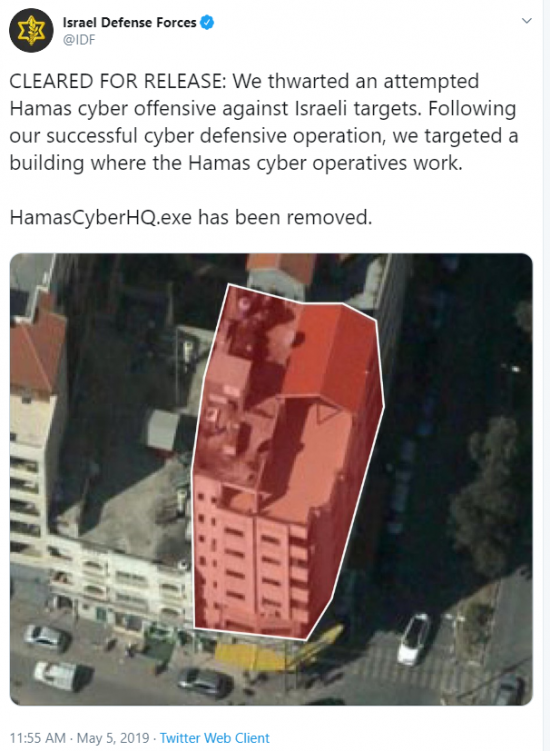 The IDF released video of the attack:

From the image of the building after the attack, released by the IDF, it’s pretty obvious that Hamas located the cyber command center in a civilian building. 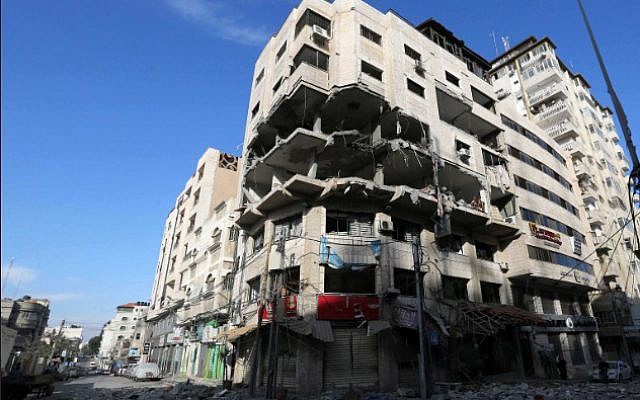 That is typical for Hamas, which we have documented uses civilians as human shields, Remember, Hamas hides behind civilians and international media will try to cover it up.

While the U.S. has targeted ISIS operative involved in cyberwarfare in the past, this appears to be the first real-time military attack on a cyber command center, according to The Verge:

The Israel Defense Force says that it stopped an attempted cyber attack launched by Hamas over the weekend, and retaliated with an airstrike against the building where it says the attack originated from in Gaza. It’s believed to be the first time that a military has retaliated with physical violence in real time against a cyberattack….

What’s novel about this particular incident is that it appears to be the first time that a military has met a cyberattack with a real-world response during an ongoing battle. As ZDNet’s Catalin Cimpanu points out, the US targeted a member of ISIS back in 2015 after he released US service member records online, but that attack didn’t occur in real-time. “Israel’s response against Hamas marks the first time that a country has reacted with immediate military force to a cyber-attack in an active conflict,” Cimpanu writes.

The Verge asks whether the attack was appropriate:

Given that the IDF admitted that it had halted the attack prior to the airstrike, the question is now whether or not the response was appropriate.

Considering that the Hamas target likely was Israeli infrastructure and/or military assets, it certainly does seem appropriate and proportionate to the threat.

Israel could have leveled the entire building. But from the photo it’s clear that only the floors in question were hit. Also, it’s very likely that Israel sent warnings to civilians in the building — via cell phones and the so-called roof tap — to evacuate. That meant that civilians were spared, but so were the Hamas cyver operatives, who live to hack another day even if their command center was destroyed.

Welcome to cyber warfare, where the warfare part means just that.

Israel destroyed their cyber facilities. Hamas immediately asked for and got a Hudna. They’ll be back in business as soon as they replace the destroyed equipment.

Jerusalem Post has an article about a tip Mossad gave the US about an Iranian plot against the US.
Could be the reason for the carrier movement in the Gulf. Iran seems to be hurting from the sanctions -boo hoo for them.

Iran has a bit over 40 hydroelectric and dams. We should be knocking them out. That would really crimp their style.

Given that the IDF admitted that it had halted the attack prior to the airstrike, the question is now whether or not the response was appropriate.

What is wrong with these people? Were they dropped on the head?

The Israeli’s have long puzzled me. But then, so do my fellow American citizens.