Colorado Students Storm Out of Vigil After Speakers Politicized Their Grief

Colorado Students Storm Out of Vigil After Speakers Politicized Their Grief

“We are people, not a statement.” 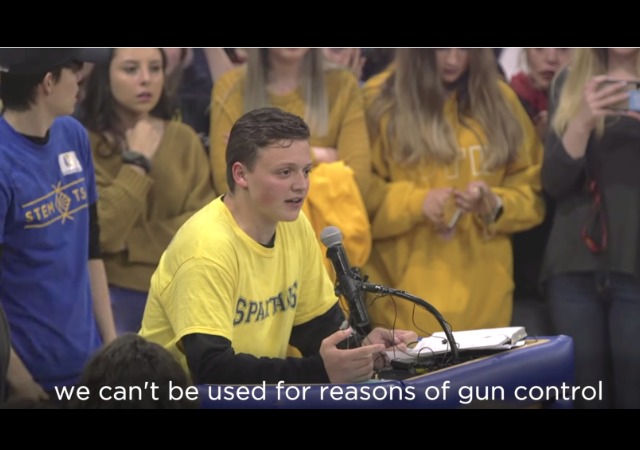 On Tuesday, two people attacked the STEM School Highlands Ranch and injured eight students. Kendrick Collins, 18, rushed towards the shooters to save other students. He passed away.

Students held a vigil for Collins on Wednesday night but marched out of it after two politicians used the event to push for gun control.

They did not approve of the politicians politicizing their grief.

The vigil was bound to turn political since the Brady Campaign to Prevent Gun Violence organized it. Democrat Sen. Michael Bennet, a presidential candidate, and Democrat Rep. Jason Crow used the vigil to push gun control. From ABC News:

Speakers at the event, which honored Kendrick Castillo, the 18-year-old who was killed protecting his fellow classmates at the STEM School in Highlands Ranch, also talked about the need to take action in the wake of another tragic school shooting and reform the nation’s gun laws.

“I know our kids already have enough to do, they have a job to do when they come to school, you have a job to do when you come to school,” Bennet, the former Superintendent of the Denver Public Schools, said before praising Castillo’s bravery. “Their job is not to fix America’s broken gun laws. Their job is not, as Kendrick so selflessly did yesterday, to give up their own life to save their classmates lives. Or the teachers’ lives. That’s not their job.”

“You sent me to Washington to speak the truth. So here it is – we are failing. We are failing when this happens over and over and over and over again and nothing happens,” Crow, a gun owner and former Army Ranger elected to Congress last year, said. “You already have my thoughts and prayers, but you deserve and should demand more. Because to only send thoughts and prayers when you’re a member of Congress or when you’re in a position to take action and to affect change, it is empty, it is hollow, and you and your children deserve more.”

As the speeches went on, students became frustrated and left. Some shouted, “Let STEM students speak!” It all became too much, which led the students to march out. Others yelled as they left “‘this is not for us,’ ‘political stunt’ and ‘we are people, not a statement.'”

The tone changed during the second vigil at Highlands Ranch High School, as STEM School Highlands Ranch students burst into a spontaneous demonstration, protesting politics and the media.

The protest, in the form of a walkout with chants, happened after Sen. Michael Bennet, a Democratic presidential hopeful, and Congressman Jason Crow, spoke to the crowd.

Candace Craig, who has three kids attending STEM, said it was just too early for to push for action. She said the trauma is still fresh for the thousands of parents and their kids who suffered through the shooting and the anxious hours that followed.

“We need quiet. We need familiar faces. We need to hold our babies. We will heal and we will rise stronger and ready to say ‘enough,'” she said Thursday. “But right now, we are shaken. We are broken. We hurt for the families whose worlds were turned upside down with grief and loss. That’s what we want the world to hear from us.”

Wednesday night, the traumatized shooting survivors who exited the rally thrust lighted cellphones into the air and chanted “mental health, mental health,” as their hands and voices shook in the cold rain. Angry students pushed and screamed at journalists, demanding to see photos they had taken.

The students returned to the gym but took over the microphone to voice their frustrations. One student lashed out at the politicians for treating them as statistics instead of people:

Students later re-entered the event and vented their frustration at the media and politicians.

“What happened at STEM is awful, but it’s not a statistic. We can’t be used for a reason for gun control. We are people, not a statement,” one student said after the event.

The Brady Campaign apologized for the event. The organizers only realized after the walkout “that all efforts should be focused on providing support to the students, faculty, and families affected by the tragic shooting.”

Gun control org @bradybuzz apologizes for #STEMshooting vigil. Students walked out saying their grief was being politicized. “We are deeply sorry any part of this vigil did not provide the support, caring & sense of community we sought to foster and facilitate” #9NEWS #copolitics pic.twitter.com/NHD6EaekXg

Shame on these politicians. Major props to the students. You see it on social media after every shooting. Every person who wants gun control immediately politicizes the tragedy to push their agenda. It’s disgusting and inappropriate.

Hopefully, they learned their lesson. I do not have high hopes for that, though.

While medical diagnostic technology has improved by leaps and bounds, the same cannot be said for mental illness. While there are new medications, they are not very effective and our understanding of brain chemistry and function has no improved much.