College Student Shocked to be Arrested for Stealing Pro-Life Sign

College Student Shocked to be Arrested for Stealing Pro-Life Sign

“I cannot believe this is happening” 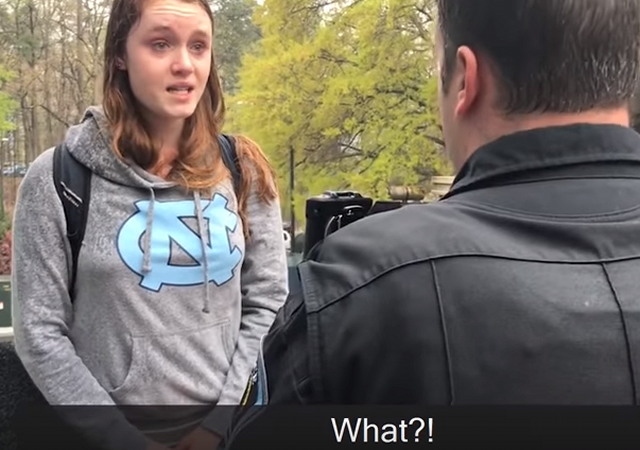 Last week, a young woman was arrested on the campus of UNC Chapel Hill for allegedly punching a pro-life advocate. Now there has been a second arrest after another young woman stole a pro-life sign.

Clash over abortion at UNC results in second arrest

A second student on the same campus faces larceny charges after she stole a sign that read “warning: abortion victim photos ahead” just days after the first incident.

Beigel and his colleague repeatedly told her she was on camera stealing the sign.

Amanda Prestigiacomo of the Daily Wire has more:

WATCH: Feminist Steals Pro-Life Sign. Then The Cops Show Up.

In a video posted by the group, the feminist is captured grabbing an orange pro-life sign from Beigel’s hands. As she’s walking away with the group’s property, the woman ignores warnings that her actions equate to theft and that she’s walking right toward a police officer.

Sure enough, a police officer confronts the alleged thief moments before she’s able to toss the sign.

“Why’d you rip it out of his hands?” the officer asks.

“Because this restricts women’s rights,” the woman responds, pointing to the pro-life sign.

The officer informs her that she does not “have a right to take someone’s property” even if she doesn’t agree with the group’s protected speech. “You can ignore them,” he offers, adding, “They have a right to be here.”

“This is why women have such a problem getting abortions in North Carolina and y’all just let them get away with this s***,” the woman says, nearly breaking into tears…

“I cannot believe this is happening,” she says.

The most amazing thing is the girl’s reaction when she realizes she will be held accountable for her behavior. She is stunned to learn that her outrage over this issue doesn’t override the law. Watch the whole thing below, strong language warning:

Maybe if more students were held responsible for their behavior in this way, we would see fewer students acting out on campus like angry children.

It would be interesting to know, down the road, what, if anything, she learned from this experience. We would hope that it might be life-changing for the better.

It’s the “Sir, I’m not trying to get arrested” that gets me. She thinks this is going according to the usual rules of engagement, where a BUNCH of thugs show up and do this crap, then when they are good and finished they call over the police and tell them who’s agreed to be “arrested” (briefly detained then released) that day. NOT TODAY, my little one.