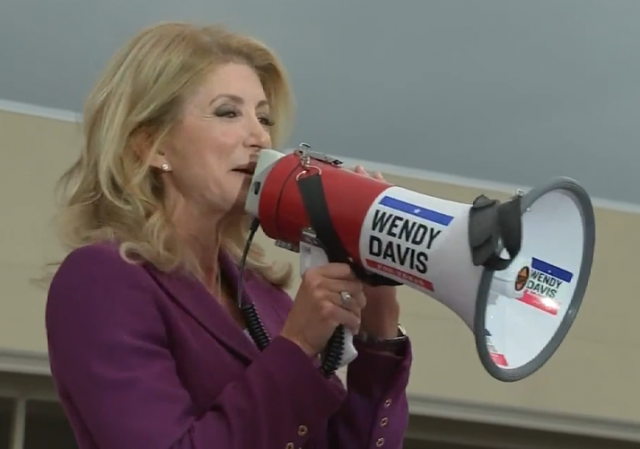 You may remember Wendy Davis, the State Senator whose gubernatorial run resulted in a 21 point defeat by now Governor Abbott. All the press wishcasting and fawning couldn’t save Davis and her pink Nikes.

After Beto put up a solid fight against Sen. Cruz in 2018, there was chatter about a Davis Senate run, seeing as Sen. Cornyn is up for re-election in 2020. But it’s not the Senate Davis has in her crosshairs, according to a report in the Texas Tribune, Davis is “looking very seriously at Congressional District 21.”

Davis, also a former state senator, had mulled whether to take on U.S. Sen. John Cornyn, R-Texas. But in the podcast, “The Rabble: TX Politics for the Unruly Mob,” Davis made clear she is no longer weighing a Senate campaign and reiterated her call for U.S. Rep. Joaquin Castro of San Antonio to enter the race.

“There’s a reason I made a decision not to run for this Senate seat against John Cornyn,” Davis said on the show, which was taped Thursday. “I’ve been very candid about the fact that my dear friend Joaquin Castro is someone that I’d like to see run.”

In November, Republican Chip Roy narrowly won District 21 against Democrat Joseph Kopser, who came up 3 percentage points short. Kopser had been considering another run for the seat — or a Senate bid of his own — but recently announced he will not seek any office in 2020.

TX-21 is one of six GOP-held districts in Texas that national Democrats are now targeting for next year. It stretches from Austin to San Antonio and out to the Hill Country.

“Joseph Kopser gave a valiant effort [in 2018] — worked so, so hard and came very, very close,” Davis said on the podcast. “Can we do it for 2020? I want to make sure that we have the ability to win it, and I believe we do. And, I want to believe I’m the right person to help us do that.”

If Davis does run, you can bet coastal media will call the race before it even begins and we’ll be here to cover it.

After alexandra cortez was elected, every flake on the left thinks they can get elected.

We were bound to have trouble when they gerrymandered this district to include part of Austin.