It’s survived the full force of Hollywood and social media assault and thrived. 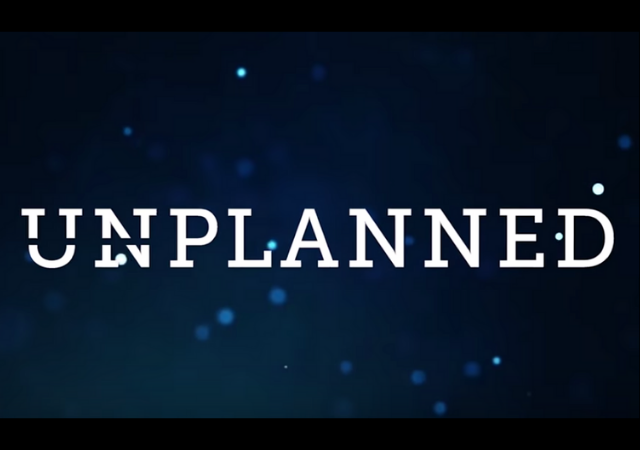 The saga of Unplanned reads like an espionage tale in modern Hollywood. The film from Pureflix, the same producers as God’s NOT Dead, I Can Only Imagine and The Case for Christ, was famously shot entirely in secret and released this past weekend. The leadup to the movie’s release was rocky, to say the least.
Just weeks before release, Pureflix found itself with the first movie in its history to ever receive an R rating. The decision sparked much speculation that the association’s decision was highly politicized. The movie has several scenes bloody scenes in which an abortion is depicted on an ultrasound as well as some salty language but for the most part, the movie isn’t pushing harder than PG-13.

Unplanned is an adaptation of the 2011 autobiography by Abbey Johnson which describes her life experience after leaving Planned Parenthood after witnessing an abortion procedure for the first time via the aforementioned ultrasound. It’s a strange sort of Christian movie given its propensity for swearing and blood (not usual features of most family/faith movies) but it’s also a uniquely powerful film on its own modest terms that doesn’t shy away from some of Abbey’s darkest moments.

In the leadup to the film’s premiere, multiple television networks including Lifetime, Hallmark Channel, HGTV, Travel Channel, Cooking Channel, and Food Network refused to run advertisements for the film. The networks merely declined the offer to run ads for the movie citing the “sensitive nature” of the material and not wanting to get involved in politics.

As reported by The Hollywood Reporter:

“Lifetime, for example, told the film’s marketers that they declined to air the commercial due to the “sensitive nature of the film,” the ad buyers tell The Hollywood Reporter. The marketers, though, note that the network — which is owned by A&E Networks, a joint venture of Walt Disney and Hearst Communications — previously promoted an interview with Scarlett Johansson where she pitches Planned Parenthood.”

The movie has had additional problems with critical scores. Half of the professional film critics who reviewed the film for Rotten Tomatoes disliked the film, excoriating it as “mediocre”, “extreme”, “bland”, “ridiculous”, with one critic going as far as to describe it as “propaganda” while opining that it could “incite violence.”

None of this nonsense was enough to stop the movie’s success. On opening weekend, the movie took in a solid $6.4 million and hit #4 in the domestic box office. The movie’s insurgent success is quite encouraging. Considering the recent developments in the past few months of the abortion debate, the film’s success represents a breath of fresh air for members of the pro-life movement.

But the film’s success hasn’t cured headaches for the producers. On Saturday, March 30th, the film’s Twitter account has been suffering numerous problems over the weekend of its premiere. The account was reinstated shortly thereafter.

Thank you everyone for your support in letting @Jack & @Twitter know when our Unplanned Movie account was recently suspended without cause.
We are back and excited for the great response we're getting in theaters this weekend.#grateful https://t.co/vTmhqoXIWm

Then on Monday as hundreds of thousands of people began rushing to like the now-famous Twitter page, numerous people found themselves automatically unfollowed from the account whenever they’d leave the page.

What is going on with the @UnplannedMovie account @TwitterSupport???

I WAS following @UnplannedMovie and just saw that I wasn’t anymore. So I went to refollow and this keeps happening!

Whatever the reason for Twitters glitching/shadowbanning/memory-holing of the Unplanned twitter page, it hasn’t stopped the page from becoming massively popular, accruing over 300 thousand followers in a few days. Whatever can be said of the film, it’s survived the full force of Hollywood and social media assault and thrived.

PP is terrified of folks like these and James O’Keefe. They, like cockroaches, run from the light. Reality is their enemy. Horror is their trade. Partial birth abortion, and particularly post birth infanticide are Dr. Mengele level atrocities. Roe v. Wade was touted as never endangering a viable infant. It was always, “for the safety of the mother.” All lies.

I’m old enough to remember when babies were “officially” declared to be unviable tissue masses. My niece went screaming mad when I suggested that, “if it’s not a baby, then you’re not pregnant.”

Joe Biden is being criticized by the baby-killers for opposing partial birth abortion. Our culture has sunk to such depths that words cannot express.

If the pro-abortionists cannot stand the emotional and practical consequences of their open hatred for children, then what is left for them? Answer: The money they make from selling baby parts and their penultimate disdain for human life.

“Reality is their enemy.”

You are too kind. The left is terrified of the truth. They hide because they are deeply afraid of who they are. Dorian Gray hid his portrait from view, did he not?

The My Pillow guy was the biggest financier. He has already recovered his investment. He put up about a third of the film’s cost.

Tyler does Unplanned the movie have a web site address?

Earlier in the week, maybe at Ace of Spades website I read that Twitter had deplatformed(?) 90,000 people plus.

Maybe it was actually much higher than that???

I use DuckDuckGo, it’s a really good search engine; it also doesn’t track you and often has more accurate results than Google. Maybe you ought to try it out, that website was the first result on my search! https://duckduckgo.com

It boggles the mind that Hollywood gave this movie an R rating.
They want 13 year olds to get abortions without parental notification – but they won’t allow 17 year olds to see this movie without accompanying an adult.

The irony of the foolish murderers saying that this film incites violence when they commit violent death upon innocent babies daily! Oh, the hypocrisy!

And they do it FOR PROFIT.