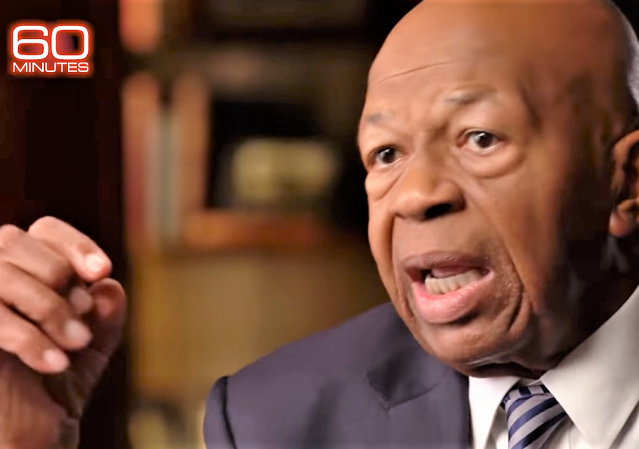 Democrats, who now control the House of Representatives, are using their committee powers to wage an all out war on Donald Trump regarding his personal finances, including businesses.

This use of government power to go after all things Trump is not new. Various state Attorney Generals, particularly Tish James in New York, have signaled a desire and intent to subject Trump’s personal and business finances to extreme scrutiny looking for a crime.

The weaponization of the House subpoena power to wage a personal war on a president may not be completely unprecedented, but it does raise important legal issues. To the extent a particular House committee is seeking information, documents and testimony regarding conduct a president engaged in as president or some other political office, that could be considered fair oversight. To the extent a House committee is waging political war on a president’s non-political personal and business finances, particularly for events prior to taking office, that raises substantial privacy concerns.

Trump and various Trump entities have just filed suit in federal court in D.C. seeking to prevent prying into his personal finances. The Complaint (pdf.) is embedded in full at the bottom of this post. 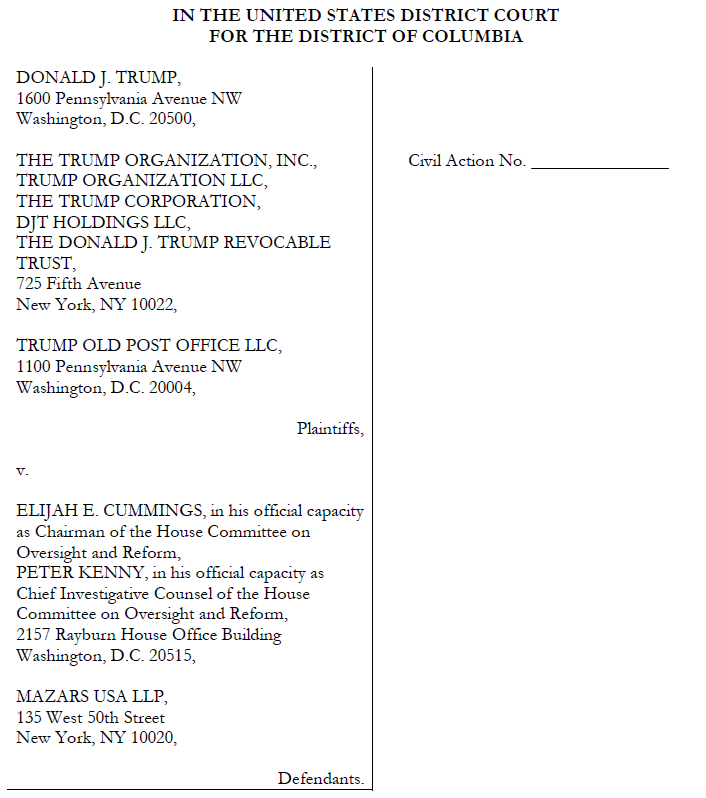 Here is the Introduction to the Complaint:

1. The Democrat Party, with its newfound control of the U.S. House of Representatives, has declared all-out political war against President Donald J. Trump. Subpoenas are their weapon of choice.

2. Democrats are using their new control of congressional committees to investigate every aspect of President Trump’s personal finances, businesses, and even his family. Instead of working with the President to pass bipartisan legislation that would actually benefit Americans, House Democrats are singularly obsessed with finding something they can use to damage the President politically. They have issued more than 100 subpoenas and requests to anyone with even the most tangential connection to the President.

3. This case involves one of those subpoenas. Last week, Defendant Elijah E. Cummings invoked his authority as Chairman of the House Oversight Committee to subpoena Mazars USA LLP—the longtime accountant for President Trump and several Trump entities (all Plaintiffs here). Chairman Cummings asked Mazars for financial statements, supporting documents, and communications about Plaintiffs over an eight-year period—mostly predating the President’s time in office.

4. Chairman Cummings requested this information because Michael Cohen—a felon who has pleaded guilty to lying to Congress— told the House Oversight Committee that the President had misrepresented his net worth while he was a private citizen. The Committee, according to Chairman Cummings, now needs to “investigate whether the President may have engaged in illegal conduct.” The Chairman claims he can do so because the Oversight Committee can supposedly investigate “any matter at any time.”

6. Chairman Cummings’ subpoena of Mazars lacks a legitimate legislative purpose. There is no possible legislation at the end of this tunnel; indeed, the Chairman does not claim otherwise. With this subpoena, the Oversight Committee is instead assuming the powers of the Department of Justice, investigating (dubious and partisan) allegations of illegal conduct by private individuals outside of government. Its goal is to expose Plaintiffs’ private financial information for the sake of exposure, with the hope that it will turn up something that Democrats can use as a political tool against the President now and in the 2020 election.

The Complaint seeks injunctive relief, but as of this writing there is no request for a temporary or preliminary injunction on the PACER electronic docket. Instead, the Complaint briefs the law, which is somewhat unusual for a Complaint.

Here is the relief sought:

This will present some interesting legal issues as to the ability of a House committee to seek records that are not directly related to a president’s actions as president. If a House committee can go after personal and business records, what is the limit?

Most presidents would not have the personal financial ability to fight to protect their personal privacy. Trump does, so this case may end up with an unintended consequence of the desire to get Trump — some judicial limitation placed on House committee subpoenas of future presidents.

So what happens when the Left/Democrats finally get the Trump tax returns only to discover that Trump has been audited to death and that no illegal activities are there. Sure, they will try and spin it by identifying some legal loophole as a crime when it is not or some moral argument about using some method to legally reduce one’s taxes, but ultimately it would all fail.
>
Now imagine this all coming out during the campaign season. This appears to be a case of the Democrats being on the ropes after the disastrous Mueller report along with more than two years of hysteria, the Left’s/MSM’s constant lying, and now they are going double or nothing. A nothing result in this tax fraud witch hunt would ensure Republican victory and rule for the foreseeable future. Given Trump’s penchant for laying traps for the Left/Democrats to fall into, doesn’t this seem particularly foolish for them to try to find fault with Trump’s tax returns? But, then again, it seems the entire Democratic Party seems overtaken by bad choices and foolishness lately.