DHS shakeups asked during a meeting with Egypt’s president. 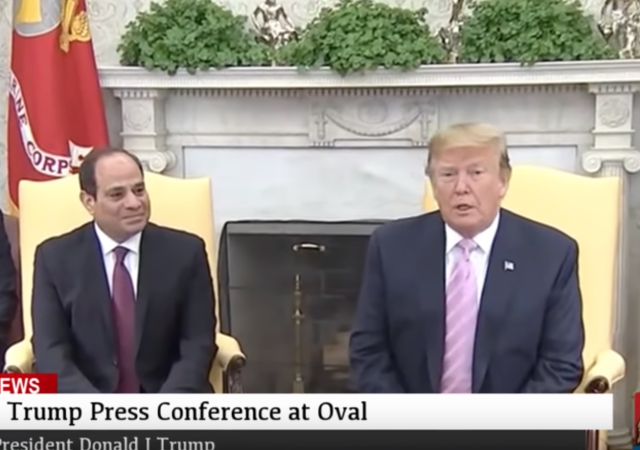 Egypt’s President Abdel Fatah al-Sisi met with President Donald Trump on Monday to thank him for American efforts to enhance relations between the two nations.

However, before the press conference with Egypt’s leader, Trump gave a robust and heated response to a press assertion that he was “cleaning house” at the Department of Homeland Security.

Well, I never said I’m “cleaning house.” I don’t know who came up with that expression. We have a lot of great people over there. We have bad laws. We have a judge that just ruled, incredibly, that he doesn’t want people staying in Mexico. Figure that one out. Nobody can believe these decisions we’re getting from the Ninth Circuit. It’s a disgrace.

And so we’re fighting the bad laws, the bad — the bad things that are coming out of Congress. You have a Democrat Congress that’s obstructing. You talk about obstruction — the greatest obstruction anyone has ever seen. All they have to do is spend 20 minutes and they can fix this whole problem.

Trump then went on with his meeting with Sisi, Trump, which covered issues relating to the military and trade.

During the joint-press conference held shortly after Sisi’s arrival at the White House, Trump welcomed Sisi saying that the two countries have developed their relations on many levels especially regarding confronting terrorism.

Sisi also affirmed that the two countries relations’ have not been better.

Sisi arrived the U.S. on Monday night and met with the United States Secretary of State Mike Pompeo. Both sides reaffirmed the strength and importance of the U.S.-Egypt bilateral relationship.

According to Spokesperson for the U.S. Ministry of Forghen Affiears Morgan Ortagus, Pompeo thanked President Sisi for his leadership in advancing Egypt’s and the region’s security and stability, including through counterterrorism efforts and countering the Iranian regime’s malign influence.

President Trump was also asked about Sisi’s potential tenure in office, which could mean he would be the Egyptian President until 2034. Egypt’s parliament overwhelmingly approved constitutional amendments in February, which head to a national referendum, that would extend Sisi’s presidency.

Trump responded by noting the enhanced relationship between the two nations, which had suffered under Obama.

“I think he is doing a great job,” Trump said as he sat down for talks with Sisi in the White House. “We have never had a better relationship between Egypt and United States than we do right now.”

A number of us US lawmakers wrote to Secretary of State Mile Pompeo, urging him to raise key concerns about Egypt during the meeting, including the “unjust detention” of U.S. citizens.

More than a dozen U.S. citizens are detained in Egypt, according to the letter, which was signed by the top Republican and Democrat on the Senate Foreign Relations Committee.

Praveen Madhiraju, a lawyer from Pretrial Rights International, is hoping the visit would secure the release of Mustafa Kassem, a U.S.-Egyptian national detained in Egypt for almost six years. According to Kassem’s attorneys and family, he was unlawfully arrested following a time of turbulence after the 2013 ouster of the Islamist president.

Kassem started a hunger strike in September 2018 after he was sentenced to 15 years in a mass trial with more than 700 defendants. His family said he’s slowly dying.

Maybe it’s just me, but there seemed to be significantly more newsworthy subjects for the press to address specific to Egypt than a staff shakeup, which is standard fare for a Trump administration when one of the appointments does not work out. But then again, I am not one of those “professional journalists.”

He should be cleaning house at DHS (and FBI, DoJ, CIA, EPA, ad nauseam).

He should have cleaned house when he took office. Clear it out.