Romney sees himself as a prototypical statesman, and he doesn’t have a clue why Trump appealed to American voters 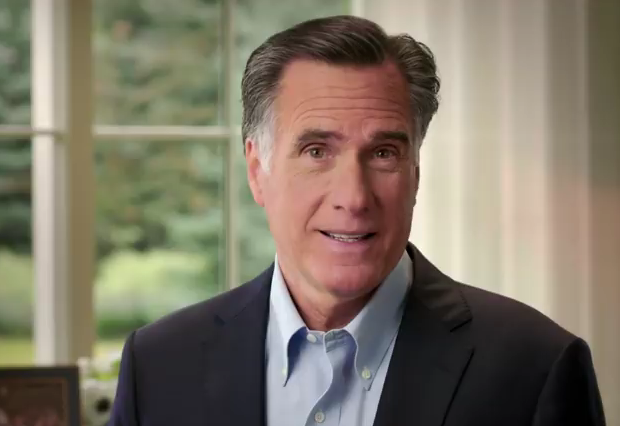 The long-awaited release of the Mueller report revealed, unequivocally, that there was no collusion between the Trump campaign and Russia in the 2016 election.

However, Mueller’s decision to lay out the case against Trump with regard to obstruction, and doing so without pursuing indictments against him or anyone else in his circle, has had  predictable results: the left is screaming for Trump’s scalp, and the Trump White House and his supporters are declaring vindication.

And then there’s Senator Mitt Romney (R-UT).  He self-righteously tweeted Friday about how “sickened” he is by the picture of Trump painted by the Mueller report.

Utah Republican Senator Mitt Romney offered harsh criticism of the Trump administration after reading the recently released redacted version of special counsel Robert Mueller’s report on Russian involvement in the 2016 election, saying he was “sickened” by the “dishonesty and misdirection by individuals in the highest office of the land including the President” in a statement on Twitter Friday.

I have now read the redacted Mueller report and offer my personal reaction: pic.twitter.com/ACnExskqXJ

On the one hand, I get that Romney wants a heaping spoonful of vindication after having been roundly mocked, ridiculed, and dismissed as out-of-touch and ignorant when he declared during the 2012 presidential race that Russia was our nation’s greatest geopolitical threat.

Obama sneered that “The 1980s are now calling to ask for their foreign policy back because the Cold War’s been over for 20 years.”  And the leftstream media hopped on the ridicule bandwagon, bludgeoning Romney with his (as has become clear) factual statement.

Now that Romney is maligning Trump, however, the very same media who once mocked him relentlessly are now sorry (not sorry).

Amusing to watch anti-Trump journalists reversing themselves on Romney/Russia now that Romney is denouncing Trump based on the Mueller report. https://t.co/YHsUq4LG7w

But on the other hand, it’s hard not to wonder how much of Romney’s outraged outrage is simply sour grapes.  He lost the presidency because he was unable to mobilize the very voters who turned out in droves for Trump in the very next presidential election after Romney’s own 2012 defeat.

Whatever his motivation, Romney has stepped into it because the Trump team is pushing back.  Hard.

Starting with the president himself who has “pinned” his response to Romney on his profile page.  For those not on Twitter, Twitter users can select a tweet that will stay on top of the user’s feed; this is the same thing we do here at LI when we have a “featured post” that stays at the top of our home page. 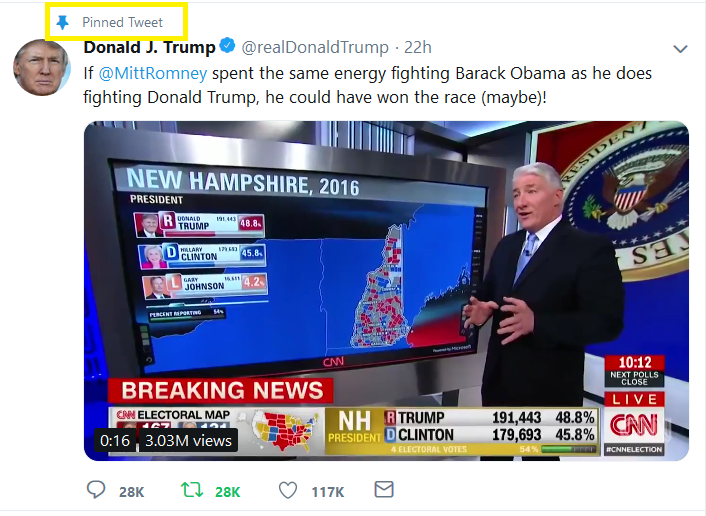 Additionally, both Rudy Giuliani and Mike Huckabee have entered the fray, heaping caustic commentary on Romney.

Some of Mr. Trump’s surrogates have gone on the attack against the few Republicans who have criticized the president over the Mueller report’s findings, especially Sen. Mitt Romney (R., Utah).

“What a hypocrite,” Rudy Giuliani, a lawyer for Mr. Trump and a former New York City Mayor, said on CNN’s “State of the Union.” He was responding to a statement in which Mr. Romney criticized the president for his campaign’s documented willingness to accept damaging material about Hillary Clinton from Russia.

“Man, man, I could tell you the things he wanted to do,” Mr. Giuliani said, in reference to Mr. Romney’s past campaigns for the presidency. “Stop the bull. Stop this pious act that you weren’t trying to dig up dirt on people.”

Huckabee, too, is pushing back.

Former Arkansas Gov. Mike Huckabee lashed out at Sen. Mitt Romney after the Utah Republican said he was “sickened” by the level of dishonesty from President Trump’s administration in response to Special Counsel Robert Mueller’s redacted report into Russian interference in the 2016 election.

“Know what makes me sick, Mitt? Not how disingenuous you were to take @realDonaldTrump $$ and then 4 yrs later jealously trash him & then love him again when you begged to be Sec of State, but makes me sick that you got GOP nomination and could have been @POTUS,” Huckabee tweeted Friday.

Know what makes me sick, Mitt? Not how disingenuous you were to take @realDonaldTrump $$ and then 4 yrs later jealously trash him & then love him again when you begged to be Sec of State, but makes me sick that you got GOP nomination and could have been @POTUS https://t.co/dmidOraRGQ

There were some Republicans (like Mitt) who really didn't understand what the Mueller report revealed, but to be fair, there are some Dems (like @Mark_Penn ) who completely understand. His column is sobering and courageous. https://t.co/rPC0BOurie

Ultimately, Romney is in a weak position here for a number of reasons, not the least of which is that there was no collusion.  Romney is essentially arguing that he finds Trump’s character to be lacking:  Orange Man Bad.

As Trump points out, Romney seems far more comfortable fighting the duly elected president of these United States, one from his own party, than he ever did fighting Obama for the presidency; furthermore, there is a touch of the wounded puppy (not the one strapped to the top of his car) here.

Romney honestly doesn’t get why he lost or why—a mere four years later—Trump won.  Romney sees himself as a prototypical statesman, and he doesn’t have a clue why Trump appealed to American voters (and continues to appeal to his base in record numbers), while he did not.  For Romney, Trump is an uncouth, unsavory character with no redeemable qualities whatsoever.  By contrast, Romney—ignoring his own cheap shots and petty foot-stomping—sees himself as the better man, the better president . . . who never was.

Count on Romney to be a sanctimonious, moronic backstabber, time after time.

All deep characer flaws aside, what’s most amazing is his broken political antenna.

Remember, he lost reelection as an incumbent governor of Mass. after one term. How’d manage that?

Then, he lost an election to fat candy crowley. (Obama stood by and watched.)

Now, he thinks he can become the next ‘maverick’ GOPe rat.

It must be that to know Romney, is to despise him.