“the pope is on our side” 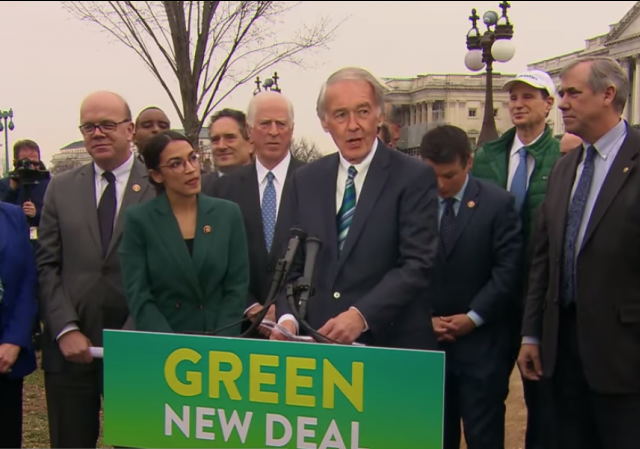 It’s also about socialism and it would be nice if Markey or Ocasio-Cortez would admit it.

In order to convince college students to support the Green New Deal, the senior senator from Massachusetts told them it addresses their two favorite subjects: “intersectionality and marginalization.”

Democrat Ed Markey spoke at the University of Massachusetts-Boston Monday to commemorate Earth Day, laying out arguments in favor of the nonbinding congressional resolution on climate change.

It was their concern for intersectionality and marginalization, he said, that led Markey and freshman Rep. Alexandria Ocasio-Cortez to write the Green New Deal, which aims to fix “systemic racial, regional, social, environmental and economic injustices.”

Markey claimed that “the pope is on our side,” though Pope Francis has not taken a position on the Green New Deal, and warned that the re-election of President Trump, “the denier in chief,” would be a “death sentence for the planet.”

Markey crowed that about a dozen Democratic candidates for president are sponsors of the resolution, which contrasts with the absence of questions about climate change in the 2016 general election debate between Hillary Clinton and Trump.

Yet the senator may be taking his message to college students because his own colleagues aren’t ready to publicly support the far-reaching resolution. It also promises “high-quality health care” to all Americans, guaranteed jobs with “paid vacations,” and free college.

And, he isn’t addressing just how much synthetic fertilizer it will take to grow those magic beans. /s

What a load of crap.

The first thing you have to know about Markey is he is one of the drawling East Coast elitist that has never had to work a day in his life, but feels empowered, and elite enough, if not necessary and called forth by a sense of duty, to tell the peasants that surround him that he will lead them forth.
The second thing you must know is he is actually rather stupid, perhaps even more so than Kerry. But that is made up by his lack of knowledge, which imparts upon him a great sense of obligation and confidence, to correct the course of the country, even if the masses must suffer for a few generations in order to better the land.

The purpose of the “Green New Deal” is to force us into being a Socialist/Marxist craphole. How many acres of solar panels will it take to run the subways in NYC?? At night?? Until they can answer this question, they have NO credibility.

Well it is just downright magic isn’t it? Does it brush yoour teeth for you too??