It’s not a secret the McCains despise Trump. 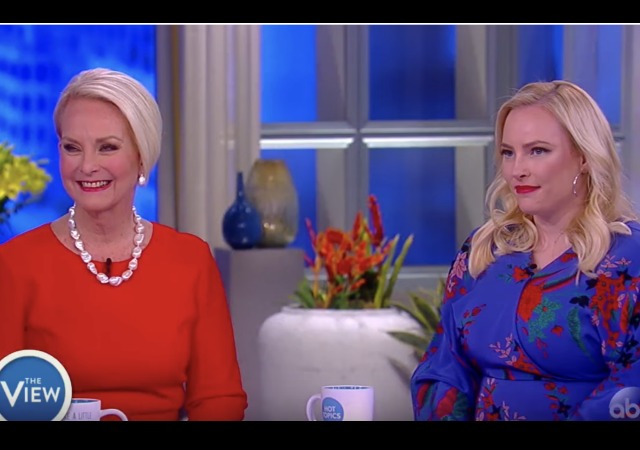 Former Vice President Joe Biden reportedly will announce his 2020 presidential candidacy sometime on Thursday after months of rumors and speculation.

According to a Washington Examiner bombshell, he may have received a huge support system. It looks like the family of the late Sen. John McCain will support him “in hope of removing Trump from office in 2020.”

However, Cindy McCain tweeted that she has no plans to get “involved in presidential politics.”

The information comes from unnamed sources, but honestly, it would not shock me if this becomes true. The McCains and Trump do not get along.

A former McCain campaign official with close ties to the family said support for Biden was a given, but they needed to calculate how they could best help the former vice president. Both Cindy and Meghan McCain remain Republicans, and one consideration is whether endorsing Biden in the Democratic primary could do him more harm than good. “It’s undeniable that Joe Biden and the McCain family have a very close, personal relationship. It’s about what’s good for him [Biden].”

Another McCain family source said there had been discussions with the Bidens about his 2020 run, which is expected to be announced on Thursday. “They talk regularly and have been supportive of his run,” the source said. “The question is going to be timing and coordinating with the Biden campaign. There are a lot of moving parts there and [Biden’s campaign is] not necessarily organized. I wouldn’t expect a formal family endorsement because some of McCain’s family is still in the military, but I do expect Cindy to speak out at some point.”

The source said they expected Meghan McCain to speak out in favor of Biden should he get the nomination, but a Cindy McCain endorsement could come sooner.

I updated the title due to this tweet from Cindy McCain:

Joe Biden is a wonderful man and dear friend of the McCain Family. However, I have no intention of getting involved in presidential politics.

It doesn’t mean others will stay out.

The Bidens and McCains have always been close, but grew closer when doctors diagnosed McCain with brain cancer:

The families were drawn further together when McCain came down with brain cancer, the same illness Biden’s son Beau died of at the age of 46. During an emotional appearance with Meghan McCain on The View while McCain was ill but still alive, Biden sought to comfort her, saying of him and McCain, “We’re like two brother who were somehow raised by different fathers or something, because of our points of view.” After her father’s death, Meghan McCain said Biden and his family helped her through her grief.

Biden gave a eulogy at McCain’s funeral, saying he loved him and considered him a brother.

As The Washington Examiner pointed out, the feud between Trump and the late McCain began in 2000 during the presidential campaigns when “Trump questioned McCain’s military service by proclaiming he was ‘captured’ during the Vietnam War.”

Trump amped up the feud in the 2016 elections:

Tensions increased when Trump ran for the GOP nomination during the 2016 presidential election, saying McCain was “weak” on immigration and implied he was an “incompetent” senator. Trump remains livid about McCain’s role in disseminating the “dossier” drawn up by former British spy Christopher Steele containing unproven allegations about collusion between the Trump campaign and Russia in 2016 and Trump watching prostitutes urinate on a bed in a Moscow hotel room in 2013.

McCain skipped the Republican convention in 2016, when Trump received their party’s presidential nomination. After the release of the infamous “Access Hollywood” tape in October 2016, McCain said it was “impossible to continue to offer even conditional support for his candidacy” and that he could vote for neither Hillary Clinton nor Trump. McCain on Election Day refused to say he voted for Trump, while Meghan McCain said she voted for Evan McMullin, an independent.

The feud hit its climax when McCain “helped doom the Republican attempt to repeal Obamacare.”

Meghan has also never held back her disdain for Trump, but I give her credit for going with him when he does something right or realizing the truth when it comes to the Mueller report.

She criticized Trump over his tweet on National Former Prisoner of War Day. In March, after more attacks on her father from Trump, Meghan said she doesn’t “expect decency and compassion from the Trump family.”

Biden led in polls until recently when Sen. Bernie Sanders (I-VT) took over. I agree with my coworker Stacey Matthews that Biden will likely see a bump in the numbers once he announces.

I don’t like his politics, but I’ve always liked Biden. I believe he may be the one Democrat who could give Trump a run for his money. Will the McCain support help? Ehhhh…hard to say. I wouldn’t be shocked if it doesn’t help Biden.

she will vote for him.