Once again, it’s all about Benjamin Netanyahu. 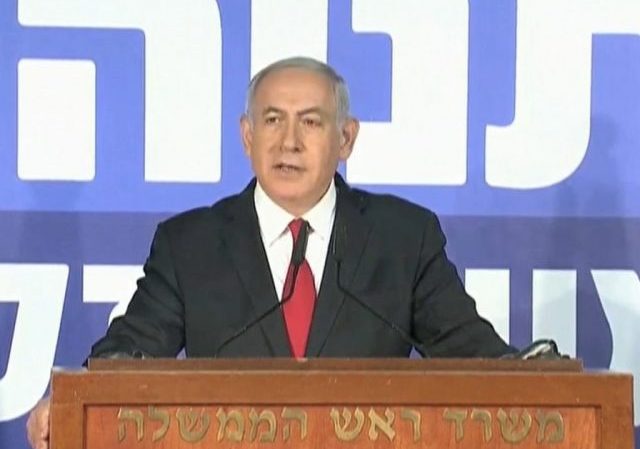 With election day on Tuesday, April 9, in Israel, will Benjamin Netanyahu win his fourth consecutive bid (and fifth overall) to become Israel’s prime ministe Or will he be displaced by a ticket headed by Benny Gantz, two other former chiefs of staff, and former journalist Yair Lapid?

Lori Lowenthal Marcus provides a synopsis of the parties and process. Haviv Rettig Gur has a more comprehensive overview at Mosaic.

Netanyahu called for the elections in December.

Times of Israel editor, David Horovitz, wrote an extensive case against re-electing Netanyahu. Horovitz framed his argument with the question, “Is Netanyahu good for Israel?” And the only conclusion he allows you to draw is “no.”

Horowitz the prime minister’s main rival to make a viable point against another term for Netanyahu: “Benny Gantz, noted in an interview with this writer last week that the IDF, the Mossad, the police and all other such hierarchies change their leader every few years, ensuring that they evolve effectively with a constant injection of fresh thinking and vigor.”

However,  he ruined it later, by citing Gantz again: “Gantz has warned that Netanyahu is setting Israel on the path to becoming something like Turkey, where President Recep Tayyip Erdogan has gained ever-greater control over law enforcement and the media and “is protecting himself from investigations and from other efforts aimed at preventing corruption.”

This was irresponsible of Gantz and of Horowitz for quoting uncritically. I know prosecutors are accorded a lot of respect in Israel, but they are also human. Netanyahu knows from personal experience. When he was first elected Prime Minister in 1996, at least three of his choices were nixed because of investigations into his preferred candidates by an out of control prosecutor.

In 1999, after he lost his initial bid for reelection, Netanyahu was investigated, though the charges were eventually dropped. But these investigations (including the ones that currently threaten Netanyahu) are accompanied by frequent leaks prompting a lot of the public to prejudge the case. I fail to understand why Horovitz and other Netanyahu critics aren’t outraged by these abuses. Given his past experience, I can’t imagine why Netanyahu wouldn’t be more than a little combative about another trial in the court of public opinion.

Key thing to remember abt tomorrow: when Netanyahu says this has been the best decade in Israel’s history, he’s…maybe sorta right? Whatever else Bibi is, he’s also a succsssful incumbent who understands this particular political system maybe better than anyone who’s ever lived

My former boss, David Hazony, writing in The Forward, boldly predicts that Netanyahu will win again:

Israelis know death is always lurking just on the other side of bad political choices. They have lost people because of politics. And the last time they picked an ex-IDF chief of staff and political novice to run the country, in 1999, they got the Second Intifada, they got coffee shops and buses exploding, they got utter impotence in the face of rampant violence.

People died, real people, whom they once loved but now could only remember.

Whereas Horovitz wrote that Netanyahu has “alienated large parts of Diaspora Jewry,” Hazony noted, “I’d much rather have Israeli security policy dictated by the intifada-traumas of Israelis than the Holocaust-traumas of American Jews.”

Put a little differently, Netanyahu appeals to Israel as it is; many of his critics want someone for Prime Minister who appeals to their view of what Israel should be.

If Gantz wins tomorrow and gets re-elected two or three times, don’t be surprised if, in seven years time, pundits will be complaining that he is alienating Diaspora Jews.  In the end, if he is elected, Gantz will be elected to serve as Prime Minister of Israel, not some American perception of what Israel should be. And there will be no shortage of people in the future who will not forgive him for doing just that.

Netanyahu is a man without principles, who will whatever he finds to be currently in his best interests. Right now he’s campaigning for right-wing voters, trying to lure them to vote for the Likud rather than one of the genuine right-wing parties, so he’s promising all sorts of good stuff.

If he gets his way, a Likud with a clear mandate to form a government, he will present the right-wing parties with an ultimatum: go along with me and I’ll give you ministries and small wins, or defy me and I’ll be “forced” to get in bed with Gantz, Lapid, Nissenkern, and that whole merry circus crew, and make them “painful concessions”.

The only way he will keep his current promises is if he’s forced to. If the Motherhood-and-Apple-Pie party gets 4-5 more seats than Likud, then he will not be head of a unity government, so he won’t want one. And since not all the right-wing parties have promised him their support in advance, he’ll have to, what’s the word, negotiate with them, giving them an actual say in the government. He’ll have to give them their bottom lines, because in that scenario they can threaten him that they’ll start talking to the circus crew, who will be willing to give them stuff because they really don’t stand for anything anyway.

This is why Feiglin insists that he’s not in anyone’s pocket. He doesn’t want to go with the circus either, but he knows how little Netanyahu can be trusted, so he needs to be able to use them to threaten him. Here’s hoping he pulls it off, and is able to drag Bibi, kicking and screaming, into keeping his promises.

For Israel to have the type of leader you envision, the system has to be changed so that no party may place represntatives into the Knesset unless they have at least 25% of the vote. This would cut the number of parties to 3 at most, and all of this need for vote trading would vanish overnight.

All of the evils which you attribute to Netanyahu are made necessary by a horrible system of government. It needs to be completely scrapped and rewritten from scratch.

On the contrary, you have it exactly backwards. It’s only proportional representation that allows the actual right to exist, and to force Netanyahu to occasionally do the right thing.

The big parties raised the entry barrier to 3.25% precisely to limit this, by frightening people into voting for them, so they can have the independence to do whatever they like and scr*w the base. That’s why Bennett/Shaked may sink without a trace, and all their votes be wasted. A 25% barrier would mean 1-2 big parties competing for the center, one smaller one catering to the left, and nothing for the right. Certainly a star like Feiglin could never shine with a 25% barrier.

This article ignores the fact that Horowitz and TOI hate Bibi with slightly more passion that they hate Trump and religious Jews. Every day there is another anti-Bibi, anti-Trump or anti-religious article. In fact, TOI is probably the second most anti-Israel site in Israel after Haaretz. And the article you cite, makes no attempt to explain why Gantz is suitable for PM other than he was once chief of staff. If anything, that should be a negative mark because the army staff has done all it could to prop up Abbas, Hamas, and the PA.

Israeli political system suffers the fate of ALL parliamentary systems do – they are inherently unstable and prone to being hijacked by vote buying –
much greater to limited presidential/congressional ones ;ike USA.
results in corruption BIG man dictatorships or worse no one takes responsibility.

Really? Is Canada or any of its provinces unstable and prone to being hijacked by vote buying? The UK? Australia or any of its states? Ireland? NZ? Germany? The Netherlands? Denmark? In fact almost every country in Europe? These all have responsible government (what you call a “parliamentary system”)

Canada has no serious existential issues to face, other than those which they create for themselves; so Canadians have the luxury of treating their elections like high school popularity contests, and put about as much effort into it.

On the other hand, look at the UK and you will see not only today, but for all of it’s history a long record of vote buying and trading – Churchill himself was famous for switching parties to suit his ambitions. Germany and the Netherlands today point out *all* of the problems of Parliamentary systems, they’re both being run chaotically as the electorate splinters.

Having read you criticism of Netanyahu above, I have to say that while most of that is true, it also is what is *required* of any leader who has to lead a Parliamentary system where the populace is fragmented and no party can maintain a solid majority. *Every* decision is a compromise, *Every* post is handed out to buy support, *Every* move has to be calculated with an eye towards maintaining the coalition, without regard to ideology.

That’s what Parliamentary Systems are all about.

Agreed, blaming Netanyahu for the ills of Parliamentary systems is silly.

I’m not blaming him for the imagined ills of the parliamentary system of government. I’m blaming him for his own lack of principles or spine, as evidenced by his entire career. The system has produced many leaders who stick to their principles (however wrong they may be). He is not one of them.