“This is an extraordinary scientific feat accomplished by a team of more than 200 researchers.” 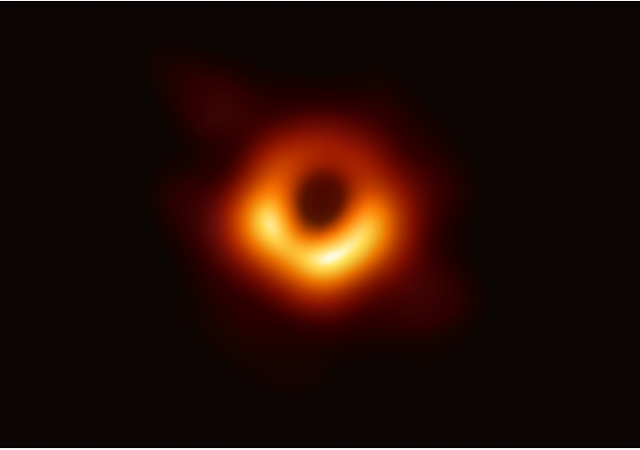 For so long we have wondered what a black hole looks like with only images from scientists on how a black hole may appear.

On Wednesday morning, astronomers released the first ever picture of a black hole in space.

The Event Horizon Telescope (EHT), “an international consortium that linked eight radio observatories around the world to create a single, Earth-size telescope,” released the image this morning.

The astronomers used telescopes located on “volcanoes in Hawai`i and Mexico, mountains in Arizona and the Spanish Sierra Nevada, the Chilean Atacama Desert, and Antarctica.”

This black hole resides 55 million light-years away from Earth. The astronomers found it “at the center of Messier 87 [1], a massive galaxy in the nearby Virgo galaxy cluster.”

“We have taken the first picture of a black hole,” said EHT project director Sheperd S. Doeleman of the Center for Astrophysics | Harvard & Smithsonian. “This is an extraordinary scientific feat accomplished by a team of more than 200 researchers.”

Black holes are extraordinary cosmic objects with enormous masses but extremely compact sizes. The presence of these objects affects their environment in extreme ways, warping spacetime and super-heating any surrounding material.

“If immersed in a bright region, like a disc of glowing gas, we expect a black hole to create a dark region similar to a shadow — something predicted by Einstein’s general relativity that we’ve never seen before, explained chair of the EHT Science Council Heino Falcke of Radboud University, the Netherlands. “This shadow, caused by the gravitational bending and capture of light by the event horizon, reveals a lot about the nature of these fascinating objects and allowed us to measure the enormous mass of M87’s black hole.”

Multiple calibration and imaging methods have revealed a ring-like structure with a dark central region — the black hole’s shadow — that persisted over multiple independent EHT observations.

“Once we were sure we had imaged the shadow, we could compare our observations to extensive computer models that include the physics of warped space, superheated matter and strong magnetic fields. Many of the features of the observed image match our theoretical understanding surprisingly well,” remarks Paul T.P. Ho, EHT Board member and Director of the East Asian Observatory [5]. “This makes us confident about the interpretation of our observations, including our estimation of the black hole’s mass.”

Collapsed stars make up a black hole, which has “gravitational forces are so strong that no matter or even light can escape once it gets too close.” From NBC News:

As the name suggests, black holes themselves are completely black and invisible. But scientists had long believed that radio waves given off by the gas and dust swirling around a distant black hole’s so-called event horizon — the theoretical boundary marking the point beyond which all light and matter pass inexorably into the black hole — would be visible through a sufficiently powerful telescope.

Dramatic as it is, the photo unveiled Wednesday may be just a prelude to what’s to come from the EHT.

Scientists say numerous black holes exist in space. Around 100 million exist in our Milky Way, but “astronomers say none is near enough to Earth to pose a threat.”

And yet these same astronomers will tell you that they believe in the “Big Bang” theory. How could something trillions upon trillions of times more massive(think gravity) than a Black Hole, explode?? That’s right. It could not.
Next weeks topic:The lie known as “fossil fuels”.

Say, what’s up with the “picture of radio emissions passing a singularity…” aka:hemorrhoid donut?