The Democrat convention is where it could happen. To save the Party. To save America. And most of all, to save the Obama Legacy from Orange Man Bad. 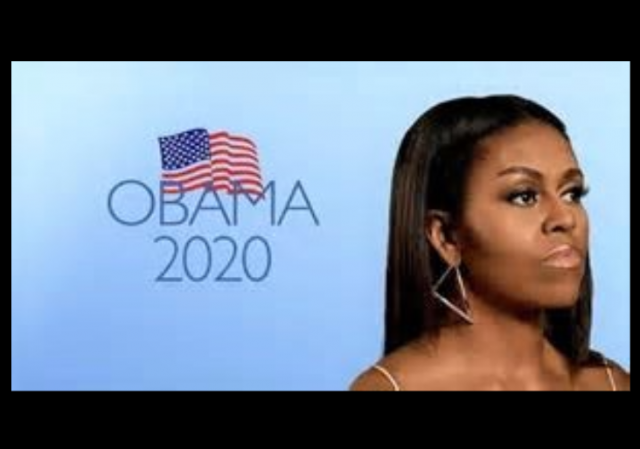 I believe her. But her husband once made a declaration that he would not run for president, until he did.

We have been on Michelle-for-President-watch longer than just about anyone else:

The logic of Michelle as Hail Mary Pass is as clear as it ever was. At least to me.

The Democratic field is expanding, with Joe Biden set to announce tomorrow, if someone remembers to wake him up.

And therein lies the problem. It’s Bernie’s nomination to lose. He may lose, but there’s no obvious person, other than Biden perhaps, who can stop him.

I don’t believe that establishment and non-lunatic Democrats will allow a Bernie nomination. Bernie as nominee would be extraordinarily risky to Democrats. He’s not only a socialist, he wants the Boston Marathon Bomber to be able to vote from prison!

Is there any doubt for whom, as between Trump and Bernie, the Boston Marathon Bomber would vote? Republican attack ad makers never had it so easy.

Bernie’s chance of beating Trump is more than zero, which will turn out Republican voters. As unthinkable as Trump was to liberals, Bernie is to non-liberals. That hurts, not helps, Bernie’s chances. Democrats were lulled into believing that Trump couldn’t win because they lived in a liberal media bubble, Trump supporters and non-socialists live in reality and they will vote.

Bernie may inspire his lunatic anti-Israel, anti-capitalist, pro-socialism base, but they can’t win a national election for Bernie. Trump hatred will help any Democrat candidate, for sure, but even many Democrats acknowledge that won’t be enough. The people who hate Trump now are pretty much the people who hated Trump in 2016.

Faced with the likelihood of 4 more years of Orange Man Bad, the loss of the House, and continued Republican control of the Senate, what will Democrats do? Will they march off a cliff behind Crazy Bernie, or lead an insurrection?

For Obama Democrats the stakes are even higher. Trump has not managed to wipe out the Obama legacy completely, in part because the lower federal courts have stymied him. A second Trump term could mean the everlasting wipeout of the Obama legacy.

You know who cares about the Obama legacy? Mr. Obama.

If Biden looks likely to win the nomination, I expect the Obamas to fall in line behind him. But if not, all bets are off.

There’s no reason for Michelle to get in the race now, where she’d have to demean herself by appearing on debate stage with clowns, kooks and fakes. Time is on her side. She will pounce at the right moment, if the moment presents itself.

Rush made this point today:

RUSH: Portland, Maine. This is Bob. I’m glad you called, sir. Welcome to our program. Hi.

CALLER: Yeah. I was just wondering, alluding back to what you said earlier about how the Democrats really don’t have anybody that’s electable. My wife brought this up to me the other day. What do you think about them at the last moment, as a dark horse, putting in Michelle Obama, where —

RUSH: You know, I go back and forth on this.

CALLER: Do you? I wonder if the… (crosstalk) Okay. I was just wondering if, you know, the ghost government, you know, if they can still — like Obama, can still — kind of control a situation (unintelligible).

RUSH: Oh, see, I think that’s it. I am convinced that The One wants back in. I think The One is sitting there seething over the dismantling of his agenda and the Trump verbal assault on it every day. But he can’t run again. And they got the Michelle book out there. It sold very well. That will tell them that she is immensely popular. If they are thinking about it, there is no way that they’re gonna get in this soon.

They’re gonna let these people eat each other up and spit each other out, beat each other up because this is gonna happen. You can’t avoid this. Every one of these candidates wants the nomination. Some of them, no, they’re not gonna get it and they’re doing it for other reasons. But there are enough people in this race that really want it. And enough of them who really think they can get it….

So they’re gonna be ripping each other apart, and in some cases they’re gonna be doing lasting damage in terms of presidential-electability. And after enough of that happens, the Obamas will survey the landscape, they will not pull the trigger and get in if they don’t think it is a lock that she would win. The last thing the Obamas can afford is for Michelle (My Belle) to get in there and not win….

How could this come down? The most likely scenario is at the Democrat convention. In March 2019, liberal Ed Kilgore at New York Magazine explored how Yes, a Contested Convention Could Actually Happen in 2020.

Michelle would win by acclamation. That her memoir is set to become the best selling memoir of all time is a sign of her star power. Democrats would swoon. The Obama coalition would be resurrected. Who would oppose her among Democrats?

Michelle as Hail Mary Pass to prevent a Bernie electoral apocalypse. Don’t rule it out.

Make no mistake El Burnmeister is a dedicated Communist and if elected will Burn this nation and Republic to the ground.

Biden is a total buffoon however he is not the clear and present danger to the Republic that the Burnmeister is.

The Black Hillary, but without the accomplishments (such as they are).

And the campaign commercials write themselves.

“A wife running as a front for her husband’s third term? Where have we seen that before? Oh yeah!”

Cut to a screenshot of a Lurleen Wallace campaign poster as AL governor, with the slogan “Let Lurleen run, but let George do it!”

Then as her face morphs into Michelle and Barack replaces George, we can run through a list of Obama failures and leftist policies. Make sure to include a list of proposals for “whites not allowed” proposals such as segregated dorms with a soundtrack of George’s “Segregation Then, Segregation Now, Segregation Forever!” and then cut to a Black Lives Matter crowd shot.

“Do Americans actually want those policies back?”

This wouldn’t completely surprise me.

But, if this were to occur, wouldn’t a lot of hard core Bernie supporters (is there any other kind?), feeling they were cheated yet again, stay home on election day? A childhood friend of mine supported Bernie in 2016 and when it came out that the fix was in, I’d say his loathing of Hillary just about came to equal his loathing of Trump. He ended up not voting. He certainly would have voted for Hillary had everything been on the up and up. I think the same thing would happen if Michelle stepped in at the last minute. These people probably have a closer affinity to Michelle than Hillary–Michelle being further to the left, checks more intersectional boxes–but getting screwed for the second time in a row would likely prove to be too much to bear and erase this benefit.

One question I have is how does anybody admire Michelle or find her appealing? In addition to her “this is the first time I’ve ever been proud of my country” and other such irritating moments before she became First Lady, after leaving the White House she’s at times been unnecessarily snarky and mean-spirited. Her dissing of Melania Trump giving her a present when power changed hand was extremely churlish; especially in light of video coming out that she did the exact same thing when the Obamas took over—she is seen handing First Lady Bush a present.

I guess the power of the establishment media to market self-pitying, absurdly aggrieved people as pure sunshine and puppies shows that, although the old-time media behemoths face more competition and don’t have the sway they used to … they can still fool a very large percentage of the electorate.

As far as admiring Michelle Obama, because of history and because blacks don’t have as many people in the upper echelons of society, I’m sure most blacks are happy to admire her.

And she’s really an American black, unlike her husband.

In my neck of the woods (Silicon Valley) Michelle is still very much admired, especially by women, irrespective of race. They feel she has “class.” And, not being proud of the US and being snarky about Pres. Trump are seen as features.

Apologies for the down vote LHC. I have fat fingers.

So, which voting blocs would M.O. appeal to?

1. The “black vote”—I don’t think this is a lock. It’s not only a blatantly racist bloc, it’s also intensely misogynist.

2. The “woman’s vote”—she’d be whipped worse than Hillary in 2016. She wouldn’t have the same appeal to the “glass ceiling” crowd as Hillary did.

3. The “let’s make history” crowd—the “first women President” would be overshadowed by the “second black President” thing. These voters would go big for a white candidate; nobody else will really do.

4. The socialists—this one’s tricky; the D’rats will want to pander to it without actually surrendering to it. But as long as Bernie’s around, anyone else just won’t be the real deal, and I can’t see them flocking to someone with no bona-fide socialist creds. Really bad school lunches are nobody’s idea of the splendors of the socialist state.