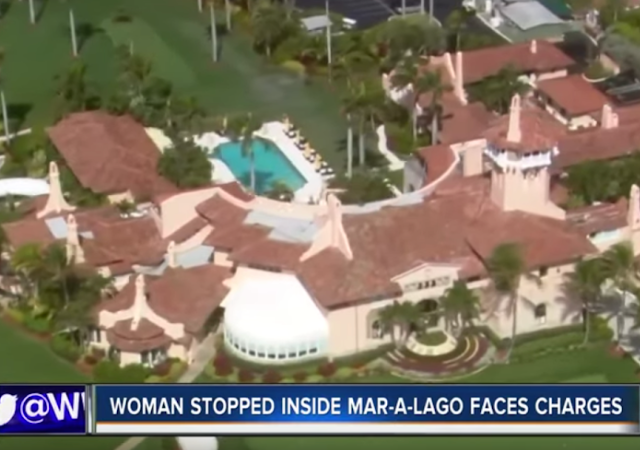 Secret Service arrested a Chinese national identified as Yujing Zhang after she managed to get past past initial security at Mar-a-Lago over the weekend with President Donald Trump in town.

Zhang had four cell phones, laptop, external hard drive, and a thumb drive. The complaint against her stated the thumb drive had “malicious software.”

The woman, identified as Yujing Zhang, said she was there to “go to the pool,” when first approached by a Secret Service agent, an affidavit said.

Mar-a-Lago security could not find her on the access list so security contacted the manager of the Beach Club who said Zhang is the last name of a member of the private club, the report said.

Because of a perceived language barrier, it was believed she was a relative of a club member and allowed on the property, an investigator said.

A valet driving a golf cart picked up Zhang and asked her where she wanted to go but she didn’t know, the affidavit stated.

She ended up in a main reception area where she told a curious receptionist that she was there to attend a United Nations Chinese American Association that evening, a Secret Service agent said.

The receptionist knew that event didn’t exist and determined Zhang was not on an access list, according to the affidavit.

Escorted off the property and questioned by an agent, Zhang claimed her Chinese friend ‘Charles’ told her to travel from Shanghai, China to Palm Beach and to speak with a member of President Trump’s family about Chinese and American foreign economic relations, an agent wrote in the affidavit.

Zhang faces charges of making false statements to a federal officer and entering restricted grounds. Both are federal charges. She can receive up to five years in prison and a $250,000 fine.

The incident has brought up more security issues at Mar-a-Lago when Trump is in town since it remains open for members and their guests. Laurence Leamer, who wrote a book on the resort, told The Washington Post that security checks have “impressed” him, but remains skeptical since the club remains open for so many people.

Other members told WaPo that Zhang’s ease to navigate through Mar-a-Lago shocked them:

People who have recently hosted events at Mar-a-Lago said they were surprised by the apparent ease with which Zhang breached the club’s perimeter, saying that, for their own events, they had to submit guest lists days ahead of time.

Michael Barnett, head of the Palm Beach County Republican Party, said that when he submitted a guest list for the annual Lincoln Day Dinner, some people were rejected.

“There’s always security, and without a doubt you have to be checked, whether it’s the 100th time you’ve been there, or the first,” she said. “If you have guests, you call ahead, at least a couple of days, and you tell them who your guests are. And you tell your guests, ‘Make sure you bring your full ID with you.’ ”

One news story described the software as “malicious malware”. That must be the REALLY bad stuff.

It was probably Windows 10. Opinions vary on whether it’s intentionally malicious or just seems that way.

Win 10 did wipe out my old laptop, so I know how dangerous it can be! Far as I know, no Chinese spies were involved- but I do live in Diane Feinstein’s state, so who knows?

Malware and Spyware share many similarities and it is easy to mistake Spyware for Malware. I suspect this is Spyware.

someone check her connections to the democrat party. they believe they can get away with anything.