CDC warns that superbug fungus is infecting hundreds across the U.S.

CDC warns that superbug fungus is infecting hundreds across the U.S.

We first reported on the potentially deadly Candida auris in 2016. 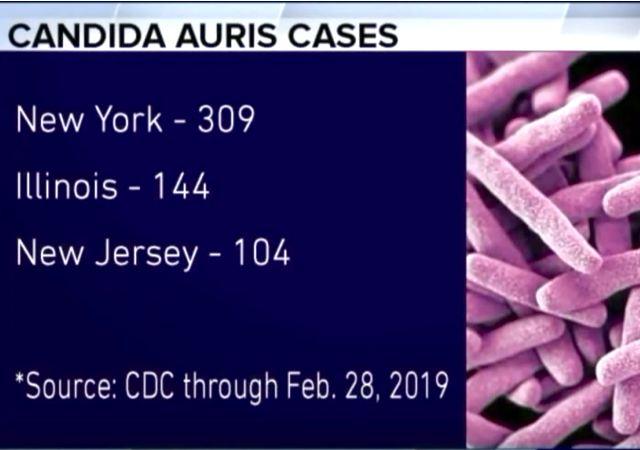 At Legal Insurrection, not only do you get hard-hitting legal analysis of current events, you also are exposed to the cutting edge of emerging disease news!

Readers may recall that in November, 2016, I reported that the Centers for Disease Control and Prevention (CDC) indicated that the first cases of a drug-resistant and potentially fatal fungal infection known as Candida auris was recorded in the United States.

In 2019, doctors diagnosed hundreds of people with it, hitting New York area the hardest.

A drug-resistant superbug fungus has sickened nearly 600 people across the United States in recent years, including more than 300 patients in New York State, the Centers for Disease Control and Prevention reported. Candida auris, which preys on people with weakened immune systems, can be deadly.

“Most C. auris cases in the United States have been detected in the New York City area, New Jersey, and the Chicago area,” the CDC said in a statement.

Nearly all (98%) of the C. auris samples from 50 of the patients were resistant to fluconazole, a commonly used anti-fungal drug. Testing of different objects and rooms revealed C. auris in the environments of 15 of the 20 healthcare facilities.

Public health officials have sounded the alarm, especially since the origins of this particular fungus are unknown.

Nearly half of patients who contract C. auris die within 90 days, according to the C.D.C. Yet the world’s experts have not nailed down where it came from in the first place.

“It is a creature from the black lagoon,” said Dr. Tom Chiller, who heads the fungal branch at the C.D.C., which is spearheading a global detective effort to find treatments and stop the spread. “It bubbled up and now it is everywhere.”

These risk factors include recent surgery, diabetes, broad-spectrum antibiotic and antifungal use. People who have recently spent time in nursing homes and have lines and tubes that go into their body (such as breathing tubes, feeding tubes and central venous catheters), seem to be at highest risk for C. auris infection. Infections have been found in patients of all ages, from preterm infants to the elderly.

To quote Professor Reynolds, “The 21st century is not starting out as I had hoped.”

C. auris is a serious problem, because it is almost totally resistant to established antibiotics and has a high fatality rate. The fatality rate likely is so high because the infected are already debilitated. However, as the vast majority of these infections occur in medical facilities, it should be possible to combat by becoming stricter with regard to surface sterilization procedures and sterilization practices of healthcare employees within those facilities. After all, people are, apparently, not contracting this infection in the local deli.

And while it might be resistant to an antifungal medication in someone’s body, it shouldn’t be immune to: bleach, vinegar, hydrogen peroxide, sunlight, flame, etc. when on surfaces and such. Sometimes, it seems we’re a bit too oriented on the pharmacological solution, and not enough on the old-fashioned prevention steps.