“It’s about citizens who don’t feel safe taking their families into downtown Seattle.” 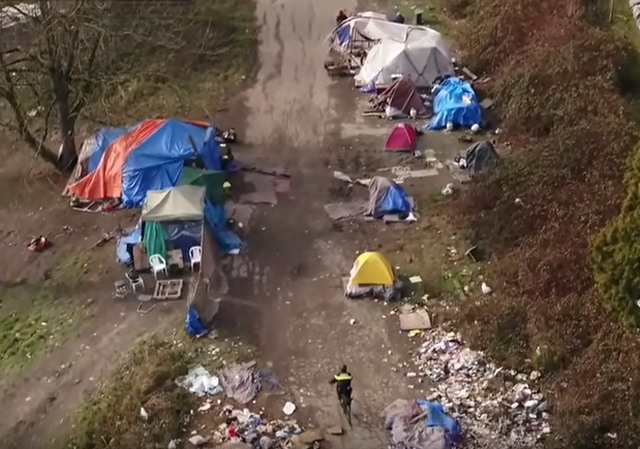 Seattle is in the midst of a crisis. Tent camps have become a common sight, along with homeless people, many of whom suffer from drug addiction, mental illness or both. We recently ran a post about the frustration of police officers in Seattle and how some of them are even resigning because they feel like they’re not being allowed to do their jobs.

A special program from KOMO News called “Seattle is Dying” examined these and other issues. The city’s leadership doesn’t seem to be doing anything about it and quite a few residents have had it.

The program contains images that are downright shocking. Parts of the city look like a permanent occupy encampment, complete with massive piles of garbage that contain hazardous waste like used hypodermic needles.

Here’s a description of the report from Eric Johnson of KOMO:

Seattle Is Dying. It’s a harsh title. Someone on social media even called it a “hopeless” title. I’ll admit to you that I wrestled with the name for some time. Too dramatic, I wondered? Too dark? In the end I went with it because I believe it to be true. I believe that Seattle is dying. Rotting from within.

This show, that we’ve been working on for several months now, is really the third in a kind of trilogy.

The first was called “There But For the Grace of God…” It explored homelessness from the inside out in 2016.

The second was called, “Demon at the Door.” It was about the hellish existence of heroin addiction.

There’s a section featuring angry residents of one area of the city who are screaming at their representatives for action. They want the tent cities managed and they’re tired of calling the police only to find out the police can arrest people but those same people will be back on the street, sometimes within hours.

As I noted last month, just 100 homeless people in Seattle were responsible for 3,500 criminal cases. This special references that story. It also asked Seattle police officers to comment anonymously on what was happening and those responses are enlightening. One officer told KOMO, “People come here because it’s called Free-attle and they believe if they come here they will get free food, free medical treatment, free mental health treatment, a free tent, free clothes and will be free of prosecution for just about everything; and they’re right.”

The program is just under an hour long and worth your time:

Seattle isn’t dying so much as being murdered.

If Trump and the other Repubs running in 2020 don’t point out that every big city in the US is a total failure of progressive/socialist policies then they do not deserve to win. In fact, every state that has been run by progressives for a few years is also a failure. Their pensions are bankrupt. Their school systems are broken and their infrastructure is crumbling. Why would anyone want to duplicate that on a federal level? Does anyone MOVE to a high tax progressive state if they can avoid it?

How does that old liberal saying go when socialism is found to be useless once again……oh yeah – it’s just that they didn’t have the right people in charge. Next time it’ll be different.

And they didn’t throw enough money at the problem too.

Pharmacutical companies sold Dr’s a bill of goods saying “Your patients no longer have to be in pain with of our new medications. Only 1% of patients will become addicted”.
LIES! Drug companies HAVE TO BE HELD RESPONSIBLE, forced to pay for environment clean up plus restoring peoples lives.

According to a relative living in the area the Seattle/King County drugs of choice are meth, crack and heroin. Not your average pharmaceutical company output.

Forgot to add the usual they did it to themselves and nobody else is responsible for their addiction or the condition in which they find themselves. Seattle allows up to three grams of drugs on a person as “legal” (without being actually legal). Even the drug dealers know this and only carry three grams with them at any given time. Three grams of heroin is 30 doses. The Socialist-Democrats are enabling the addiction. Suburbs have taken a stand against locations where drug use is permitted and monitored (the idea is when they OD someone will be there to save them). They have found that supporting drug use only encourages drug use (wow, what a novel idea!).

But not the drugs addicts on the streets use. It is the drugs addicts in politics, government, banking, business, schools, churches, synagogues, and temples use. The street addicts are the result. The cause is the “respectable” addicts, the ones who have responsibility for affairs but whose minds and morals are home-fried with toxic chemicals.

There is the drug problem. It is not on the street.