Intel agencies warn of a “possible strike by an al-Qaida cell at Jewish residential establishments or synagogues.” 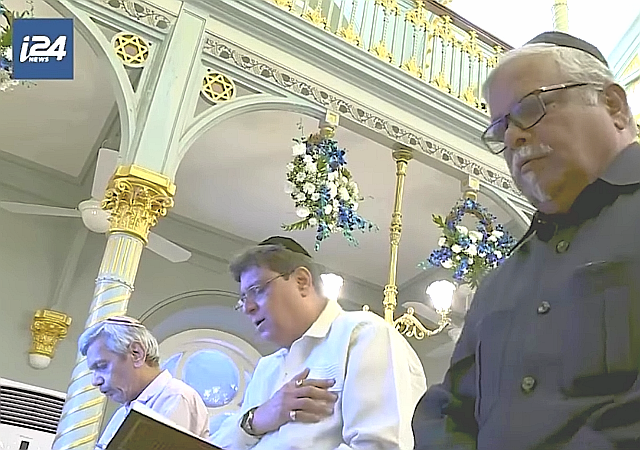 Indian authorities are taking the threat very seriously by beefing up security around Israeli diplomatic missions, synagogues, and other Jewish institutions.

The intelligence agencies have pointed to al-Qaida affiliates and ISIS-inspired terror cells for carrying out such attacks. The terror alert comes some ten years after the deadly Mumbai attacks of 2008, which included the siege at the city’s Chabad Lubavitch Jewish center. The terrorist murdered six Jewish hostages, including a rabbi and his pregnant wife.

The newspaper Times of India reported the latest intelligence assessment:

Intelligence agencies have alerted police in Delhi, Mumbai and Goa about twin threats from Islamic State and al-Qaida, sources said. The two inputs, which warn of avenging the New Zealand incident and possible strike on Jewish establishments, have come in a span of four days.

The inputs suggest that terrorists might try to use a vehicle or a knife in the attacks. The agencies have suggested an increase in vigil around the Israeli Embassy, Consulate General in Mumbai as well as synagogues and Chabad houses, sources said.

The first alert, dated March 20, talks of IS and connected cells planning to avenge the attack in Christchurch, New Zealand in which 50 people died. A 29-year-old Australian citizen, Brenton Tarrant, had entered two mosques with automatic weapons and opened indiscriminate fire.

The input reads: “As per the information received from multiple sources, an audio speech of IS spokesperson Abu Hassan al-Muhajir is being circulated on closed online groups and chat platforms wherein Muhajir is heard calling on his supporters to avenge the massacre at the mosques. This audio and other chatter indicates intent to avenge the incident. Appropriate action may be taken in this connection.”

Sources in Delhi Police said that deployment outside places of worship has been increased. “We are keeping a close watch on developments,” an officer said.

The second input, dated March 23, is about a possible strike by an al-Qaida cell at Jewish residential establishments or synagogues. The chatter intercepted by agencies indicates execution of an attack using “non-conventional” weapons. “The attack may be in the form of a lone wolf using a knife or a car or truck,” it said. For Goa, the inputs specifically mention a few places.

India has long been on the cross-hairs of the Islamic terror groups. For decades, the Hindu-majority country has faced a sustained jihadist campaign in the Muslim-dominated region of Kashmir. Islamic terrorists have killed an estimated 20,000 Indians since the early 1990s.

Much of this jihad terrorism has been directed from the neighboring Islamic Republic of Pakistan. The mastermind of the 2008 Mumbai terror attack, Hafiz Saeed, is still operating freely in the country. In early 2018, Saeed was seen sharing the stage with the Palestinian envoy at an ‘anti-Trump’ rally in the northern Pakistan city of Rawalpindi. The duo was protesting the U.S. president’s decision to recognize Jerusalem as the capital of Israel.

Since Prime Minister Narendra Modi took office five years ago, Israel-India relations have grown by leaps and bounds. High level diplomatic visits have been accompanied by record growth in tourism between the two countries. While India remains popular among young Israeli backpackers, the Jewish State has emerged a top destination for affluent Indians tourists. These growing diplomatic and cultural ties have increasingly drawn the ire of Muslim countries and Islamist terror groups.

India has been actively seeking Israeli expertise in combating terrorism. Indian special forces are training with their Israeli counterparts to hone anti-terrorism skills. Indian law enforcement officers have also visited the Israel’s National Police Academy to learn from Israeli experts. In the wake of the surging Islamic terrorism, India and Israel will have to work even more closely to counter the shared threat.

Demoncrats are too stupid to realize muslims are committing unbridled genocide of non-muslims worldwide and non-stop. The only thing the stupid Demoncrats respond to are the muslims yanking their chain by yelling islamaphobia .