I hope you will join us on this journey into Legal Insurrection 3.0. We cannot do it without you. 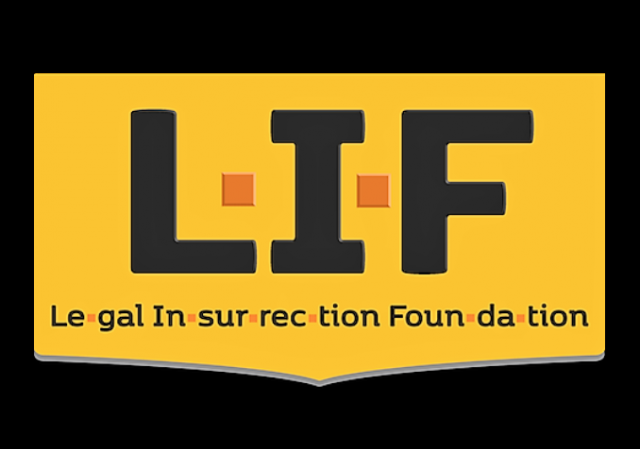 Today marks the launch of the Legal Insurrection Foundation, an IRS-approved 501(c)(3) tax-exempt organization. Consider this a soft opening. We’ll have a party, and maybe some fireworks and music, in April. For now, we’re trying to make sure all systems are running smoothly.

Donations are tax deductible to the full extent the law allows. You can DONATE HERE.

The Foundation is a research, investigative, and educational project that has been years in the making for me. I first considered forming such an entity in 2014, after the fights involving the American Studies Association adoption of the anti-Israel academic boycott. I’ve always been most proud of our original research, reporting, and investigation, but I was frustrated that our lack of resources did not allow us to do as much as we wanted in that and subsequent efforts.

Faced with the somewhat daunting task of putting it all together, my own tendency towards procrastination, and then family health issues, things got delayed. By years.

We finally filed in September 2017, and received IRS approval in March 2018, though I didn’t find out about it until months later because we didn’t receive the IRS approval letter at that time. Even with that IRS approval in hand, it was uncertain whether the vision ever would become reality. Planning remained on hold through the summer and fall. Finally, late last year, with improvements in my wife’s health, we decided to go for it.

The legal, regulatory, accounting and operational requirements have been more daunting and expensive than I anticipated. Kemberlee helped me with some of these logistics. I made a substantial personal donation to the Foundation to get us started, but moving forward we will have to rely on reader donations and other support.

The goal of the Foundation is to take our research, investigative, and educational efforts to a new and more meaningful level. A major, but not exclusive, focus will be on the intersectional left, the crossover of anti-capitalism and anti-Zionism, which are inextricably linked in their minds and which are the driving forces behind current attacks on individual liberty, economic freedom, and freedom of speech. It’s an area that I have focused on for years, long before most others, perhaps because it started on campuses.

We don’t fit neatly into an issue box, which may make it harder for strangers to understand the legal insurrection. But those who know us know our 10-year track record of finding and seizing (aka *pouncing*) on issues of importance and not letting go.

Someone once described us as “disrupters,” a characterization I hadn’t thought of before that. It is this spirit of disruption and impact that will drive the Foundation. We will not be a passive research entity, issuing reports no one reads, but an entity that uses research, investigation, and education to create an impact on the public discourse. We are in the process of putting together a team to make this happen, a process that itself could take several months, and look forward to working with other like-minded people and entities.

Commencing March 1, 2019, the Legal Insurrection website became a platform for the Foundation. You will not notice much of a change here, though we will use the website to leverage the Foundation’s work moving forward.

If you support the legal insurrection, then I hope you will donate. The DONATION PAGE allows payment by credit card or PayPal and includes directions on how to pay by check, if that is your preference.

I hope you will join us on this journey into Legal Insurrection 3.0. We cannot do it without you.

Congrats from Seattle. Yes, LI has followers in the liberal Pacific Northwest. LI is the first opinion journal that I turn to in the morning to find out what’s happening. I’ve been a steady financial contributor to the “old” LI and will now make a donation to the new “LI.” Cheers and Mazel Tov!

Sometimes I agree with you and other times I don’t. Regardless, I expect you to use correct and nonpartisan langauge.

So when you use “Democrat” as an adjective, as in Democrat Party, instead of Democratic, you are both incorrect and partisan (unless you are a Republican’t)