Two defeats in both chambers. 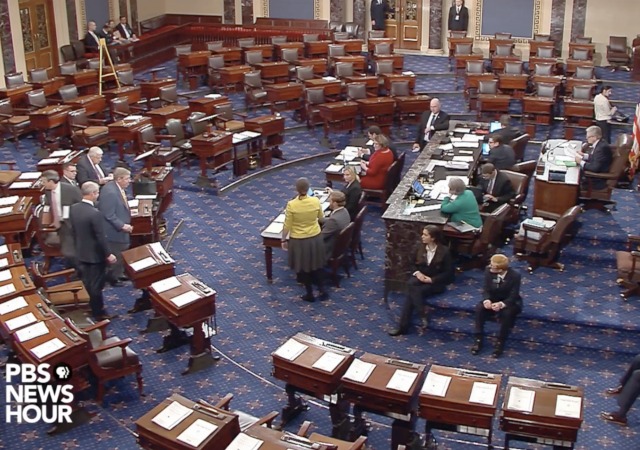 House Democrats couldn’t pull in enough votes to override President Donald Trump’s national emergency. The Senate Democrats threw a hissy fit by voting present instead of yes on the Green New Deal to protest the fact that Republicans brought the bill to the floor.

The Democrats have the majority in the House, but they failed to convince enough Republicans to their side in order to override Trump’s national emergency. They needed two-thirds in order to accomplish an override.

It’s not really a shock since the resolution to block Trump’s national emergency only passed with 245 votes, which is about 45 votes short of the two-thirds threshold.

“We have the power of the purse and that prerogative has been invaded by Donald Trump, ” House Democratic Caucus Chairman Hakeem Jeffries (D., N.Y.) told reporters Tuesday. “Everyone that cares about the U.S. Constitution, as many of my Republican colleagues profess to do, should be alarmed at this presidential overreach.”

Republicans backing Mr. Trump said before the vote that it should mark the end of the fight and enable lawmakers to move beyond the bruising debate over the border wall.

“I’m hoping that when it falls way short that we can move on and get the border secured,” said Rep. Mark Walker of North Carolina, a member of House GOP leadership. “There is critical evidence to show why this is a national emergency.”

The Pentagon announced late Monday night that officials authorized $1 billion to begin border wall construction. Acting Secretary of Defense Patrick Shanahan stated “that the funds will be used to support the Department of Homeland Security and Customs and Border Patrol.” He notified Homeland Security Secretary Kirstjen Nielsen that his department “had the authority to support counter-narcotics activities near international boundaries.”

I noted this morning that the Democrats can scream all they want, but Trump is well within his power to do this by using a “specific statutory authority that congress created for the president” in the National Emergencies Act. Trump’s declaration stated “that it is necessary to increase the use of military forces at the border and to invoke the emergency military construction authority in 10 U.S.C. § 2808, which will provide funding for the construction of border walls.”

This gives the Defense Department the ability to move around funds, even if those funds did not get allocated for a border wall.

Well, if you don’t want your bill to go to the floor, maybe don’t draft one? The Senate Democrats could not believe that Senate Majority Leader Mitch McConnell had the nerve to bring Rep. Alexandria Ocasio-Cortez’s massive Green New Deal to the floor!

But I thought the bill was cutting edge? You know, eliminate the fossil fuels and cow farts while rebuilding all the infrastructure in America!

I guess not since the Democrats all voted “present” even though many support the bill. From The Washington Examiner:

Senate Majority Leader Mitch McConnell, R-Ky., said he brought up the measure for a vote in order to get Senate Democrats to publicly indicate where they stand on the resolution, which he labeled “a radical, top-down, socialist makeover of the entire U.S. economy.”

Republicans have seized on the resolution as 2020 talking point on the Democratic agenda.

In a closed-door meeting with Senate Republicans Tuesday, President Trump urged Republicans to keep the Green New Deal a focus because he believes it will help the GOP in the 2020 elections.

The measure has the backing of the half-dozen Senate Democrats running for president.

McConnell has described the plan as “a radical, top-down, socialist makeover of the entire U.S. economy.” The American Enterprise Institute estimated the “Green New Deal would cost the economy nearly $9 trillion a year, while doing little to meet United Nations climate targets.”

Mike Lee had fun with it:

Like many other women + working people, I occasionally suffer from impostor syndrome: those small moments, especially on hard days, where you wonder if the haters are right.

But then they do things like this to clear it right up.

If this guy can be Senator, you can do anything. https://t.co/vU4ChbTnnr

I’m all in favor of pulling our troops out of Germany and using the funds for domestic security. No extra cost and national security to boot!

AOC, rather than fearing the Imposter Syndrome, give into it. Because, after all, you ARE an imposter.

Democrats are a joke. They keep debasing themselves further and further. Who, but a mentally il freak would want to identify with them anymore?

Last month, Alexandria Ocrazyo-Cortez bought herself an AM radio. It took her a week to find that she could use it at night, too!