Washington D.C. Now Has an ‘Inspector’ to Enforce the Ban on Plastic Straws

Washington D.C. Now Has an ‘Inspector’ to Enforce the Ban on Plastic Straws 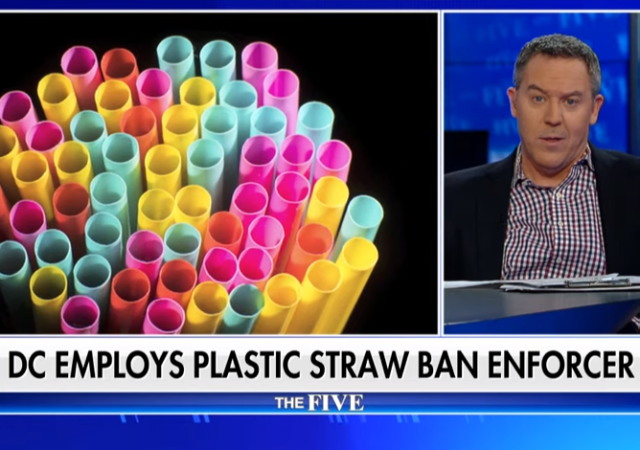 The Department of Energy and Environment in Washington, DC, now has someone to enforce the ban on plastic straws. Will you sleep better tonight knowing this scourge upon society is being dealt with properly?

On patrol with the enforcer of D.C.’s plastic-straw ban

Past Auntie Anne’s, past Johnny Rockets. At Lotus Express, a Chinese food joint, Rybarczyk peeled the wrapper from a red straw and bent the end — the telltale giveaway.

Washington has become the latest city in a nationwide movement to ban plastic straws, and it’s up to Rybarczyk, an inspector for the D.C. Department of Energy and Environment, to enforce the new law.

The straw cop left the rattled cashier at Lotus Express with a warning that if the store was still using plastic straws by July, when a grace period expires, it could be fined up to $800.

Nine years after the District instituted a nickel tax on plastic bags and three years after it banned plastic foam food containers, it has turned on plastic straws — the newest target of environmentalists trying to reduce millions of tons of plastic that ends up in trees, waterways and in the bellies of wildlife. The effort has been galvanized by a viral video of a sea turtle with a straw stuck in its nostril.

“It’s pretty absurd the amount of resources we put into creating plastic materials that we are using for five minutes to an hour, and then never again,” said Julie Lawson, director of D.C. Mayor Muriel E. Bowser’s Office of the Clean City.

Ms. Lawson makes a good point. You know what else is pretty absurd? Having government officials who police restaurants and bars to enforce the ban on plastic straws.

Greg Gutfeld offered some thoughts on this during The Five yesterday:

Gutfeld on the plastic straw inspector

Washington, D.C. has many problems — most have a “D” or an “R” after their names — but thank God the city is tackling the most pressing problem of all: Plastic straws.

Yes, D.C. now has a plastic straw inspector that visits restaurants warning them of steep fines if they don’t get rid of the evil, thin hollow tubes. Being found with a straw can earn you an $800 fine. — That’s more than the fine for practicing medicine without a license in Connecticut. (Don’t ask me how I know).

Worse, it’s more bureaucratic harassment that rattles cashiers and clerks just trying to do their jobs. And the hassle solves no problems.

The overwhelming majority of plastic waste in the ocean — which seems to be the hot button issue here – comes from 10 rivers — all from Africa and Asia. It ain’t us. Which poses a problem for left-wing activists, who need an America to protest.

Dumb laws like bans on plastic straws not only are pointless, they lead government to employ people to do pointless work. pic.twitter.com/sbxk6pG6SE

The nanny state never stops looking for ways to be annoying.

While I have no issue with a ban on the sale of plastic straws or plastic bags or plastic cups, or even a ban on giving them away in restaurants in the name of Saving the Oceans or whatever the cause du jour, I DO have a problem with fining people for simply possessing them. Regulate your big businesses to your hearts content, but leave individuals with their autonomy.

The object is to collect $800, and to give the straw owner a criminal or civil record.

Where did you get the idea that possession is illegal, let alone fined $800?

Oh no! How are they supposed to snort their cocaine Without straws?

The paper straws some restaurants are using are awful. They tend to fall apart where your lips touch them, and they quickly degrade so there’s a good chance you need a replacement before your meal is over.