Sacramento’s plans for the money may just have been derailed by the Trump Train. 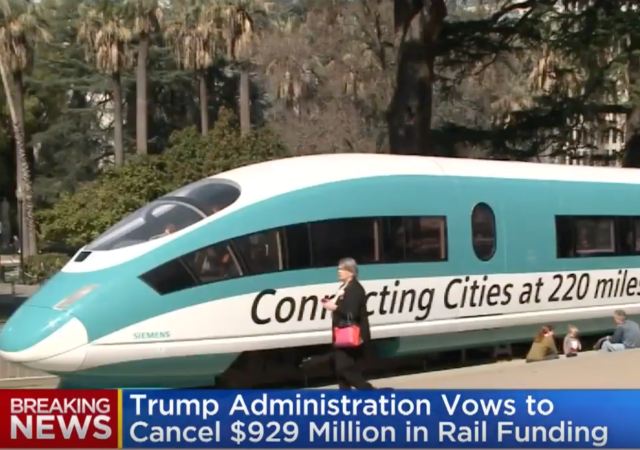 Now, the US Department of Transportation (DOT) has cancelled millions in grants for the high speed rail project that has been substantially scaled back by California Governor Gavin Newsom.

The fate of California’s troubled high speed rail project was cast into further doubt Tuesday when the U.S. Department of Transportation said it will cancel $929 million in grant funds, a move that some viewed as political payback.

The action marks an escalation in the battle between President Trump and the state of California since Gov. Gavin Newsom announced last week that the project lacked a path to complete a statewide system and vowed to scale back the $77 billion mega project.

The transportation department also said it was “actively exploring every legal option” to get back another $2.5 billion grant that is being used to finance the construction of 119 miles of rail line in the Central Valley.

The two federal grants represent about one-fourth of all the funding for the project — money critical to completing even a partial 119-mile segment in the Central Valley and finishing environmental reviews for other segments from San Francisco to the Los Angeles. If the funds are lost or tied up in a long legal battle, the state would have to either make up the money or further curtail the project.

In the announcement, the DOT’s Federal Railroad Administration said that the California High Speed Rail Authority project has missed “timely and satisfactory financial reports,” as well as several important deadlines tied to the $928 million appropriation.

The letter addressed that CHSRA has no chance of finishing the first phase of the project by the 2022 deadline.

The Federal Railroad Administration said it “has regularly communicated its concerns on the above issues to CHSRA,” and noted that “California Governor Newsom presented a new proposal that represents a significant retreat from the state’s initial vision and commitment.”

The FRA said because the CHSRA “failed to take appropriate corrective actions,” the FRA plans to “de-obligate the full $928,620,000 obligated under the agreement.”

California’s politicos are angered by the move.

“This is clear political retribution by President Trump, and we won’t sit idly by,” Newsom said in a statement. “This is California’s money, and we are going to fight for it.”

However, Sacramento’s plans for the money may just have been derailed by the Trump Train.

California has been forced to cancel the massive bullet train project after having spent and wasted many billions of dollars. They owe the Federal Government three and a half billion dollars. We want that money back now. Whole project is a “green” disaster!

the late great Howard Hughes
would have built the spruce train
😎

Complain when the grants for the project get cancelled along with the project.

Am I missing anything?

Just attended San Jose’s Community Working Group meeting for the HSR. I can guarantee the High Speed Rail Authority is going full speed ahead, no slowing down at all. The funding was discussed last night and the upshot was that this is a federal grant and it is highly unusual for fed grants to go back. The Rail Authority is planning as if there will be no drop in funding. Gov. Brown’s SOTS remarks were also addressed and clarified – the governor still completely supports high speed rail for the state.

Some people on the committee questioned the disparity between what they had been reading in the press and online and what we were hearing last night and we were assured again and again, that there is nothing wrong with the Titanic, oops! I mean the High Speed
Rail.

These projects never die.They are just put in stasis and revived periodically. Portland had the Mt Hood highway as rte 26 through Portland, but it was postponed so they could build light rail that services less than 1% of the commuter traffic. One can look at Powell Blvd on google maps and see the remnants still of access and service roads to the proposed highway. About 10 years ago an acquaintance was hired to do environmental work around Johnson Creek Blvd, which he saw as prep work for a revitalized Mt Hood Highway, which coincidentally would connect to a new huge parking project and light rail track recently built into downtown (a place where people used to work) at Tacoma Blvd. So, at 60 yrs old, the highway project is still alive in both mind and practice.

We have also recently had two major roads that were 2 travel lanes each way and a center turn lane turned into really wide single lane roads with parking on both sides. If one looks at a map it becomes very obvious that someone is doing the groundwork to convert these two roads into part of a huge trolley loop. And and inner part of this area is now being rebuilt as a series of large apartment blocks (post-modern Stalinist architecture revival) with “no” parking, so that in 10 years the people will be begging for a train to take them somewhere. They key is that they do it in baby steps. they weren’t satisfied with bike lanes, and are now just making car-free greenways by taking away entire streets.