Sen. Cory Booker is Running for President in 2020

Sen. Cory Booker is Running for President in 2020 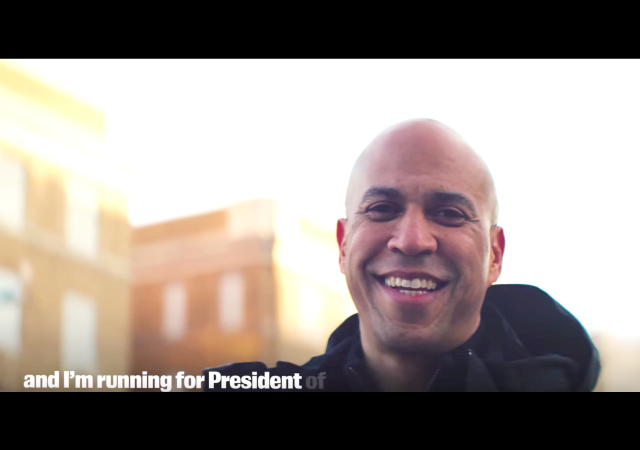 Sen. Cory Booker (D-NJ), also known as Spartacus, has officially joined the race for president in 2020.

Booker tweeted his announcement this morning, the first day of Black History Month, along with a two-minute video.

I’m running for president. Join me on this journey. https://t.co/fEDqOVIfwh pic.twitter.com/h1FTPUYRzo

“The history of our nation is defined by collective action; by interwoven destinies of slaves and abolitionists; of those born here and those who chose America as home; of those who took up arms to defend our country, and those who linked arms to challenge and change it,” Booker narrates in a video released on Friday morning, which features him walking through his Newark neighborhood.

“I’m Cory Booker and I’m running for president of the United States of America,” he says in the video.

The tweet contains his new website for his presidential run. His message includes unity and bipartisanship. From Politico:

Booker will hold up as a signature accomplishment his work with Republicans late last year to push through a major criminal justice reform package that eased mandatory minimum federal prison sentences, reduced a disparity in prison terms for crack and powder cocaine and made other prison sentencing reforms. Booker is also expected to tout his work with Sen. Tim Scott (R-S.C.) to create “Opportunity Zones” — a form of tax break in low-income neighborhoods — as part of the 2017 tax cut bill.

“Unlike everybody else in D.C., he would find good in everybody. He’d be about building relationships, getting things done,” a longtime Booker adviser said. “People fault him for that. To me, if you go a different route than everybody else, you never know where it might end up.”

An advisor told Politico that Booker will challenge rhetoric from President Donald Trump, but “won’t dwell on the president, one of his advisers said, describing the thinking as ‘you can’t fight darkness with darkness.'”

The Hill reported late Thursday night that Booker began reaching out to his colleagues for support:

“Yes, he is reaching out to members for their support,” said a former Democratic aide with direct knowledge of Booker’s intentions. “He’s going to do it during Black History Month,” which starts on Friday.

Among those who received a call Thursday were senior members of the Congressional Black Caucus (CBC), of which Booker is a member.

“He’s making calls,” a fourth source, Rep. Frederica Wilson (D-Fla.), confirmed to The Hill on Thursday night. “He left me a voice message. I have to call him back.”

We all knew this would happen, especially with his theatrics during the confirmation hearings for Supreme Court Justice Brett Kavanaugh.

I blogged last November about the new law in New Jersey that allows Booker to run for Senate and president at the same time in 2020.

Democrats are going to need a bigger clown car.