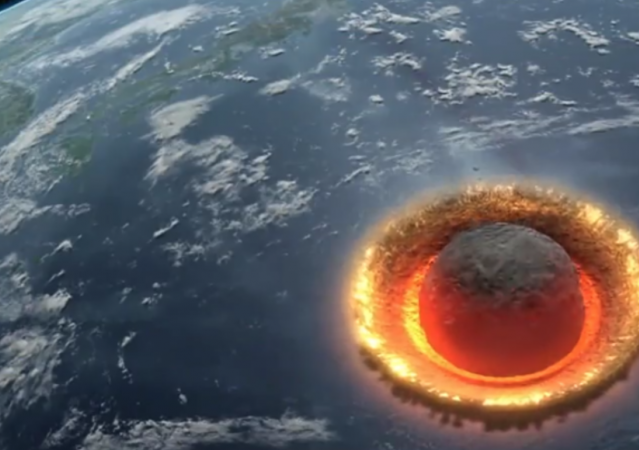 From time to time, I have covered the history of asteroid impacts on Earth that result in real global climate change and verifiable world-wide extinctions.

In a heart-warming development that shows that many scientists recognize a real risk to the Earth, the National Aeronautics and Space Administration (NASA) is now developing space technology to prevent humans from following in the footsteps of the dinosaurs into impact oblivion.

NASA and the European Space agency are teaming up for a new mission named The Double Asteroid Redirect Test (or DART).

The project aims to knock an asteroid off course by slamming into it using a special probe traveling at around 4 miles per second. DART is targeting an asteroid dubbed “Didymos” and its smaller counterpart, “Didymoon,” in an effort to “punch” the smaller rock off course. “Smaller” is a bit deceptive as Didymoon is about the size of the Pyramid of Giza. That might not sound like much, but if an asteroid that size were to impact Earth at around 19 miles a second (the average speed of asteroids), scientists say that could potentially destroy a city and wreck and entire region.

Dr. Elena Adams leads a team at the Johns Hopkins University Applied Physics Laboratory in Laurel, which is the group building the asteroid-moving spacecraft to test. She offers an interesting perspective on her job duties:

“Every now and again, when I’m feeling a little feisty, I say that my job is to save the world,” Adams said. “Most of the time I say I work at NASA missions and at this time I’m working on the DART mission that is going to move an asteroid.”

The Double Asteroid Redirection Test mission will target a moon revolving around the asteroid Didymos.

…“If an asteroid the size of Didymos, which is the moon we’re trying to hit, would hit the Earth, it would basically create devastation on a regional scale,” Adams said. “So that’s the catastrophe were trying to avoid.”

The craft the team is planning to test is about the size of a Honda Civic and is scheduled for launch in summer 2021.

They plan for DART to reach speeds as fast as 15,000 miles per hour. The crash in October 2022 will fling debris from the asteroid moon. A small satellite will accompany the DART spacecraft to measure the effect.

The team wants to hit the asteroid moon with enough force to bump it, but not break it apart. The moon orbits the asteroid at a speed of about seven inches per second. They hope to change the speed by about a centimeter per second.

“We’re just going to give it a love tap,” said Andy Rivkin, the mission’s other co-lead and planetary astronomer at APL.

In theory, a series of taps over time could deflect an asteroid off a course for Earth.

One impact may suffice if scientists have enough warning time. An imminent asteroid strike, however, would require multiple launches and impacts.

“You could have a constant stream,” Rivkin said. “Each one nudges it a bit more.”

The timing on these tests in excellent. Two sizeable asteroids will approach Earth over the next few days.

Scientists at NASA’s Jet Propulsion Labarotory (JPL) had picked up the first asteroid, named CB2 but they have also indicated that a second asteroid will hurtle towards earth on Tuesday. The second asteroid, PV25, will barrel towards Earth at break-neck speed in what NASA’s JPL has deemed a “close approach”. Scientists at the JPL have indicated that the asteroid will fly past earth at a staggering 13,622mph or 6.09 per second.

And while these two aren’t likely to hit our planet, eventually there will be one that will.

Remember when President Obama’s NASA was more focused on social justice, to the point some thought the space agency was dead? It appears that President Trump has returned it to its original mission: “To reach for new heights and reveal the unknown so that what we do and learn will benefit all humankind.“

The still is from a Discovery Channel program. Some brilliant soul has set it to music. Knowing that many of you are rock ‘n’ roll freaks, watch and listen as the world is destroyed to Pink Floyd’s “The Great Gig In The Sky”:
https://www.youtube.com/watch?v=Spdx8xzXcbA