“Ms Berger said Labour had become institutionally anti-Semitic and she was ’embarrassed and ashamed’ to stay.” 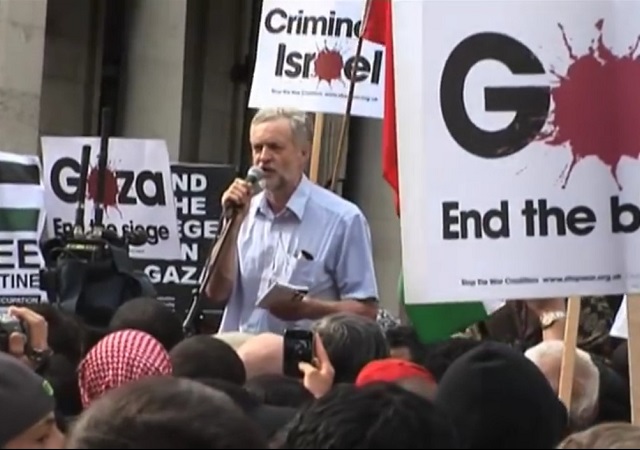 The United Kingdom’s Labour Party has lost seven members today due to many problems concerning leader Jeremy Corbyn, including his anti-Semitism. From the BBC:

Ms Berger said Labour had become institutionally anti-Semitic and she was “embarrassed and ashamed” to stay.

Mr Corbyn said he was “disappointed” the MPs had felt unable to continue working for the policies that “inspired millions” at the 2017 election.

Shadow Chancellor John McDonnell said the “honourable thing for them to do” would be to stand down and fight by-elections.

He said Labour was “a family”, adding: “We shouldn’t splinter in this way.

“It is better to remain in the party, fight your corner.”

MP @lucianaberger says she has come to “sickening conclusion” that Labour is “institutionally antisemitic”, as she joins six other MPs in quitting party.

We applaud her in her brave decision to speak out against antisemitism in the UK’s Labour party. pic.twitter.com/ZndpzSbwPp

Our President @BoDPres comments on today’s news: establishment of the Independent Group is a “searing indictment on the Labour leadership” pic.twitter.com/FToPK7Gdom

— Board of Deputies of British Jews (@BoardofDeputies) February 18, 2019

Berger proclaimed that she will leave “behind a culture of bullying, bigotry and intimidation.” Leslie blasted the Labour party for “‘betraying’ the country over Brexit, adding it has been ‘hijacked by the politics of the hard left.'” Leslie had more to say:

Commenting on his decision to quit the Labour party, Chris Leslie said: “Wouldn’t be true to my values and my constituents if I pretended that Jeremy Corbyn and his team were fit to be prime minister of the United Kingdom.

Asked if his actions would be different if Mr Corbyn was not the Labour leader, he said: “It’s not just about Jeremy Corbyn […] It is the team around him.

“The abuse online and offline in meetings. i think politics should be different.”

Labour grandee Lord David Blunkett demanded that Corbyn listen to these seven former Labour members instead of brushing aside their concerns because it could lead to “disintegration” of the party. However, Blunkett also criticized the seven MPs and insisted that “[T]his is not the way to save the Labour party.”

Deputy Leader of Labour Tom Watson lashed out at the hard left and accused them of being “too easily tempted into the language of heresy and treachery.” He said he loves the party, “but sometimes I no longer recognise it.” This is why he refuses to call the defectors traitors.

Berger and the rest will form The Independent Group. Umunna asked those in England who feel “politically homeless” to join them in order “to find a new way forward for Britain.”

I hadn’t thought that there were any decent and ethical people left in the Labor Party. I was wrong, but their exit may make me right. Even a stopped clock and all that.

Let me correct her: “Europe has always been institutionally anti-Semitic.”

I always thought that the underlying brilliance of the book “Stuff White People Like” was that they established that there were two classes of white people, the right kind and the wrong kind. Despite living in Portland and driving a Subaru, I still manage to mostly be the wrong kind. I wonder if those Seven are still anti-semetic, but now see themselves as the right kind of anti-semetic.

I guess it goes back to the old joke. “we know what you are, now we are just trying to set a price.”

I remember that joke, someone has cleaned it up.

There is a way to reduce the effects of anti-Semitism in Europe. Stop importing it. The local people already know this. It is the childless politicians that need the education.

The European left would be spewing out genocidal Jew-hatred even without Muslims. But the Muslims do make it worse. But soon the Jews will be gone from Britain, and the ones who drove them out will have to worry about preventing their women from getting sucked into all the future Rotherhams.

Henry Ford was responsible for Dearborn, which has now encompassed Hamtramck and Inkster.

Obama was responsible for Minnesota and a bunch of other areas in America, bringing in an especially vile group who mutilate their daughters genitals.

Personally, I think that the male equivalent procedure should be performed on any father and all the sons as a deterrent to them doing this to the girls. They could be collectively known as “stubs”.

Better yet, do not bring people like this to America.

NPR had a story on this, I think. They made great hay over the Labor party splintering off seven members because these enlightened individuals could no longer tolerate the intolerable main body of their party who were trying to enact Brexit without any regard to the common people and don’t we deserve another vote on this because the deadline is coming up fast and we’re not ready no, no, no!!

Then about five minutes into the story, they mentioned the Labor party problems with antisemitism and oh look at the time it’s onto the next segment.