“Dirty” Harry Reid can run from his past comments, but he can’t hide. 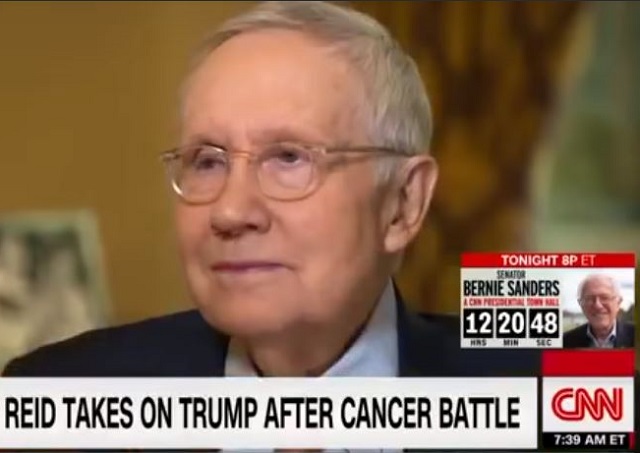 We all remember how when George W. Bush was president he was ruthlessly treated by his political opposition. Senator Harry Reid (D-NV), in particular, stood second to no one in expressing his utter disdain and contempt for “43” every chance he got.

But in an interview with CNN‘s Dana Bash that aired this week, the former leader of the US Senate is now singing a different tune:

During President George W. Bush’s administration, Reid was the Republican president’s chief antagonist in the Senate. He famously called the 43rd president a “loser,” and a “liar,” and even the worst president the country ever had.

Having covered all of that in real time, I almost fell off my chair when Reid told me that he now wishes for Bush again “every day.”

“He and I had our differences, but no one ever questioned his patriotism. Our battles were strictly political battles,” Reid said.

“There’s no question in my mind that George Bush would be Babe Ruth in this league that he’s in with Donald Trump in the league. Donald Trump wouldn’t make the team,” Reid added.

Watch a segment of the interview below:

“In hindsight, I wish every day for a George Bush again,” former Senate Majority Leader Harry Reid tells @DanaBashCNN, despite his criticism of Bush during his presidency. “He and I had our difference but no one ever questioned his patriotism.” https://t.co/inD9ayyDWP pic.twitter.com/IxgaljIX17

“Strictly political battles?” To call that “revisionism” would be putting it mildly.

Here’s just a small sampling of how Reid treated Bush:

From a 2005 Rolling Stone interview:

RS: You’ve called Bush a loser.
Reid: And a liar.
RS: You apologized for the loser comment.
Reid: But never for the liar, have I?

“I fear that the Bush years will be known as a rare, even dark time.”

“I really do believe President Bush is the worst president we’ve ever had,” Senate Majority Leader Harry Reid said Sunday on NBC’s “Meet the Press.”

This was as Bush was on his way out the door. “Strictly political”? I don’t think so.

Reid’s comments to Bash were made in the context of being asked what he thought about President Trump:

Since the 2016 presidential election, Reid has been colorful in criticizing Trump. He called the now-President everything from a “con man” to a “human leech” to a “big fat guy.” He is especially proud of using the word “amoral” in his New York Times Magazine interview because he says it resulted in a boost of googling the dictionary definition of the word.

I asked him if he has anything nice to say about the President. He pondered that question hard, took time to look for an answer and after a pregnant pause, finally replied, “I just have trouble accepting him as a person, so frankly I don’t see anything he’s doing right.”

As news of the story first broke Monday, Trump took to the Twitter machine to comment in his characteristically colorful way:

The interview painted Reid in a sympathetic light, as someone who – after going through debilitating chemotherapy treatments for pancreatic cancer (thankfully he’s in remission) – was merely making amends with old political foes like Bush and Mitt Romney. But this is ultimately about political opportunism during a critical election cycle.

Scott Jennings, an adviser to both President Bush and Senator Mitch McConnell, wrote a piece in October 2017 that called out Bush nostalgia for what it was (and still is):

This newfound Bush nostalgia smacks not of legitimate respect but of political opportunism, the latest harbinger of the rising tribalism plaguing American politics. How shallow must your political beliefs be if you are willing to tout the words of a man you used to think was a stupid racist war criminal who should be in jail?

The flippancy with which Democrats treat their political rhetoric is astounding. Yesterday’s war criminals, invalids, tax cheats and murderers are today’s indispensable statesmen, not because of their principles and decency but because Democrats lost an election and still can’t figure out why.

And in this case, it’s because Reid’s still doing his part even as a retired Senator to help rally the Democratic base and party leaders, some of who are also waxing nostalgic about Bush. But what he may find out is that his hollow rhetoric about Bush and the continuous insulting of Trump will motivate more Republicans to go the polls instead.

No sleazier person has ever been elected to public office than this creep – hillary clinton, aside.

“I wonder what Harry Reid thinks,” said no one ever.

When you say something you don’t mean deliberately, it is called lying dirty harry.

I didn’t mean it when I called Carter the worst President ever.

Well, actually I did. Obama hadn’t come along yet