“While it misses opportunities for patriotism and character depth, it highlights the sacrifice these men made on behalf of their country” 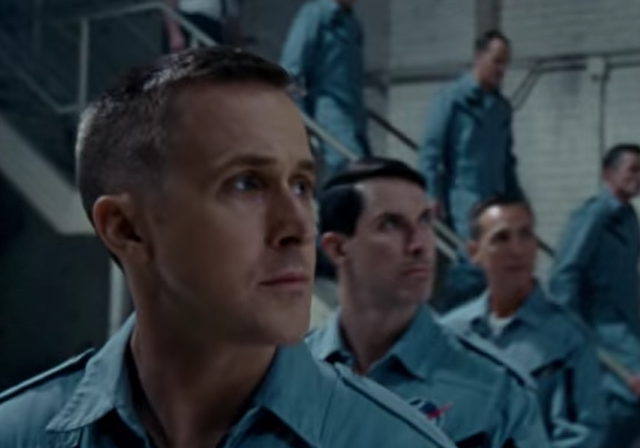 Damien Chazelle has been a hot commodity in Hollywood ever since his freshman script Grand Piano was adapted into a surprising small scale thriller in 2013. Since then he’s been propelled into the limelight with the success of his critically-acclaimed thriller Whiplash and his Oscar-winning musical La La Land.

Following such huge success in Hollywood, Chazelle was approached by Universal/Dreamworks to direct First Man, a biopic about Neil Armstrong and the 1969 moon landing. He signed to direct as his first work-for-hire directing gig and started shooting the film in November 2017 based on a revised script by Josh Singer (The Post, Spotlight).

During the runup to the film’s release over the fall of 2018, a lot of controversy accrued amongst conservative moviegoers when comments by lead actor Ryan Gosling and the director suggested that the film was going to lean far to the left.

As reported by Dailywire, the movie excluded the planting of the American flag on the moon and regarded the Apollo 11 moon landing as a human achievement instead of an American achievement. For good measure, the director went on a twitter tirade in the leadup to the film’s release lambasting Trump’s comments about the Charlottesville Rally as implicit support of Nazism.

For many, the film’s overt globalism was a sign of progressive tampering. As vlogger Bill Whittle put it, the movie was diminishing America’s role in humankind’s greatest achievement at the same time that America’s accomplishments were being memory holed generally.

The backlash however wasn’t universal. Conservative critics like Kyle Smith at National Review Online and Christian Toto both praised the film’s overt Americanism and regarded it as one of the best films of the year.

Having recently used a free Redbox coupon to watch it again, I would suggest that the controversy is overstated. While there are political themes in the movie, they are all relegated to scenes where they’re appropriate. It’s true that the flag planting is missing, but the movie doesn’t remove the American flag from any place it should be otherwise. We see the flag on at least a dozen occasions including on the side of the rockets, space suits, at funerals, and at the lunar landing site.

Proportionally, First Man is a significantly less progressive film than most of Hollywood’s recent output, as evidenced by the overt anti-Soviet sentiments, the profamily themes, and the regular uncommented upon references to tobacco use, which is unheard of in modern Hollywood films.

The only scenes in the film that directly attest to the politics of the space race are scenes involving the public backlash to the space program. In the most notable such scene, a group of anti-war protestors sing a song called Whitey’s on the Moon as the Saturn V rocket is prepared for its July 1969 launch. Even in this scene, the politics ultimately prove to be insubstantial as the moon landing becomes regarded as the most important achievement in human history. These themes are frequent in any film about space, as a cursory viewing of From Here to the Moon or The Martian can attest. Historically, space travel has never lacked controversy.

To me, the more pressing issue with the film is its prioritization of story and spectacle. The film’s actual plot isn’t all that substantial in comparison to the film’s stellar space flight scenes which rank amongst the best-filmed suspense scenes in the history of the genre.

The actual story in between these scenes however is rather perfunctory and underdeveloped. Following the death of his daughter in 1962, Neil Armstrong begins pouring himself into his work as a test pilot as the space race is ramping up and winds up behind the wheel of more and more dangerous space flight experiments that increase pressure on him and start causing tension in his marriage. In real life, Neil Armstrong divorced his wife in 1994, and by the end of the film, you start seeing that very real fracture in their lives as they’re literally separated by a glass wall.

It’s a rather insubstantial ending to the troubled and painful personal life the real Neil Armstrong had to deal with before and after the moon landing. Unfortunately, that’s ultimately the film’s problem, it doesn’t logically shift between these underdeveloped scenes and the most engrossing space flight scenes. The whole point of the story is undermined by this lack of focus. It’s a very distant, uninsightful view of Armstrong’s personal life. By focusing more on the intensity of its action set pieces, First Man becomes more of a Neil Armstrong simulator than a biopic.

On those terms however, I think First Man’s truest strength comes into focus. While the incredible cinematography finds new and exciting ways to emphasize the immense power and danger of being at the helm of these dangerous rockets, the film’s best scenes are those that emphasize the loss that was incurred by NASA in the runup to the moon landing.

Maybe the best scene in the film is when Ed White’s widow is seen by Janet Armstrong on the street near their home staring into space. It’s a powerful scene of grief wherein her own personal suffering is punctuated by a fake smile. On a second viewing, Claire Foy’s performance as Janet Armstrong becomes the standout performance as you visibly see her emotional degeneration and anxiety flare the closer the couple gets to Apollo 11.

The action scenes themselves focus uniquely on the perspective of being in the driver’s seat of these space crafts. Until Apollo 11, you see the ships take off only from the internal perspective of the ships. This is something previous Space Race movies like The Right Stuff and Apollo 13 didn’t focus on.

As a movie, First Man is unique in that it uses the cinematic experience to make you feel what it was like to be an astronaut where in every moment of your journey was vital and potentially life ending.  There are multiple scenes where Neil Armstrong comes within seconds of death and is only saved by his nerve and quick thinking.

First Man isn’t the best NASA film ever, but it is an excellent testament to the life-threatening situations Americans who went into space endured. While it misses opportunities for patriotism and character depth, it highlights the sacrifice these men made on behalf of their country.

There is an “Apollo 11” movie coming.
The good news: it has some recently rediscovered 70mm footage of the launch and mission control.
The bad news: the promo shows it to be associated with CNN.

Thanks for the waring Neo. I’ll be sure to miss it too.