Time to fire up the judicial confirmation engines again

Time to fire up the judicial confirmation engines again

Trump needs to speed up renominations, Graham needs to spirit them through the Judiciary Committee, and McConnell needs to get tough on Democrat stall tactics for floor votes. 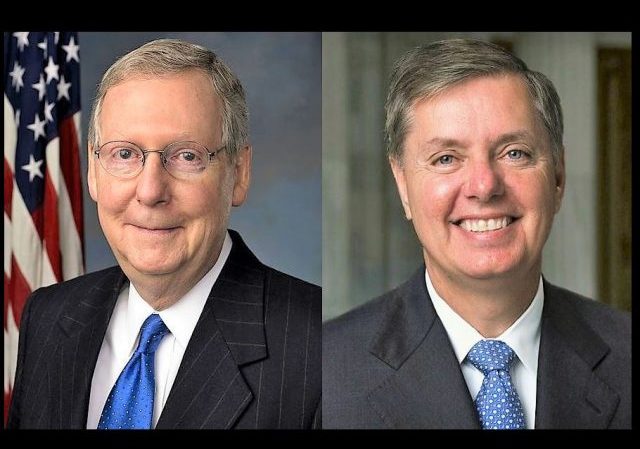 I’m so old, I remember when Republicans were ramming judicial nominations through the Senate, and Democrats were squealing like stuck pigs about it.

Then came Jeff Flake’s attempt to disrupt the process unless a bill were passed protecting Mueller, and then the congressional term ran out with Democrats refusing to carry over the nominations. That left 13 nominees for appeals courts and 60 nominees for District and other lower courts hung out to dry.

The refusal to carry over nominations, in itself, was not a big deal, because Trump could quickly renominate the dozens of pending nominees, many of whom already had Judiciary Committee confirmation hearings and were awaiting a floor vote.

But things have gone quiet on judicial confirmations the last two weeks since the new congressional term started. As of January 17, there have been only 6 judicial nominations received by the Senate.

There are 145 federal judicial vacancies as of this writing (plus another 19 known future vacancies):

The slow pace of renominations is baffling. Politico reported on January 17:

GOP activists are growing concerned that the government shutdown might be distracting President Donald Trump from what they consider his most important mission: packing federal courts with conservative judges.

Anxiety over the pace of judicial nominations reached new heights this week after the White House resubmitted for the Senate’s consideration a list of more than 100 people who were nominated but not confirmed for various offices in the previous Congress. The list did not include a single nominee for an appellate or district court judgeship; nearly everyone on it was initially selected for administration leadership posts….

“People are starting to scratch their heads and wonder, ‘When are we going to start up again?’” a person close to the White House told POLITICO of Trump’s judicial nominees.

The White House, which did not respond to a request for comment Thursday, did submit six new district court nominations this week. The Judicial Crisis Network plans to launch a $1.5 million television ad campaign Thursday night urging Democrats to “swiftly confirm” Trump’s judicial nominees, according to a person familiar with the national buy….

But in the meantime, 71 other people who were named to federal judgeships in the previous Congress are awaiting re-nomination.

Notice something about that JCN video? There are only two judges in the video. Current Associate Justice Brett Kavanaugh, and Court of Appeals Judge and potential Ruth Bader Ginsburg replacement Amy Coney Barrett.

Expect Dems not only to stall again, but also to try to dirty appeals court nominees who are potential future SCOTUS picks. We saw that with a deceptive hit job on Neomi Rao, nominated to fill Kavanaugh’s seat on the DC Circuit, by Buzzfeed. Rao also is on everyone’s short list of a potential replacement for Ginsburg.

Philip Klein at The Washington Examiner explains the preemptive attack on Rao:

On Monday, Buzzfeed published a story that dredged up some op-eds Rao wrote as an undergraduate at Yale in the 1990s. My colleague Quin Hillyer already posted on how the story distorted her work to portray it in the worst possible light. But it’s worth also looking at the process behind the article.

The story notes that it was the “the liberal advocacy group Alliance for Justice” that “first highlighted Rao’s college writings to BuzzFeed News.” In other words, the story was based on opposition research conducted by a liberal group that is tasked with fighting conservative judicial appointments. The story then quoted Nan Aron, the president of the Alliance for Justice. Buzzfeed’s report was then picked up by numerous other news outlets including Huffington Post, Glamour, CNN, and Newsweek.

With the hit pieces out in the media, Alliance for Justice then issued a press release titled, “Rao’s Writings are Disqualifying,” that claimed the organization had “learned” about the writings, citing media reports.

So, to sum up: A liberal group dumped oppo to the media, the media played it up, then the liberal group cited those media reports to proclaim the nominee disqualified.

Whatever else is or is not happening in D.C., not matter what other parts of the government are or are not fully staffed, there is no excuse for Republicans slowing down the judicial nomination and confirmation process. As it is under current rules, it will take months to work through the hearings and votes on the people left hanging at the end of the last congressional term.

Let’s get moving. Trump needs to send over the renominations. New Judiciary Chair Lindsey Graham needs to speed them through the committee. And McConnell needs to schedule floor votes, even if it means shortening debate from the current 30 hours.

Yep. It’s high time to kick this into high gear.

Especially when I think we all know that sometime in the very near future Ruth Bader Ginsburg will be off SCOTUS.

Let’s get this done before she goes because all hell will break loose when her replacement is nominated.

When ‘all hell’ breaks loose, don’t counton The Turtle.
We’ve GOT to dump that corrupt clown.

I have to disagree there. Slightly. Sure you can’t trust him but he wants the same judges that Trump wants. He was there for Kavanaugh. He didn’t back down even in the face of all that nutty stuff.

In the past the GOP would have run with it’s tail between it’s legs but in this case he held the line.

So yeah I’d rather he be gone too but as long as he’s willing to fight for a SCOTUS nominee lets use it.

Don’t forget what McConnell announced to us when Odumbo was president: he’s not going to oppose him/her/whatever Odumbo is.

McConnell is as corrupt as pelosi, about as trustworthy as ryan and about as useful as boehner.

How McConnell and Chao used political power to make their family rich:
https://nypost.com/2018/03/17/how-mcconnell-and-chao-used-political-power-to-make-their-family-rich/

I never said McConnell is a saint. He’s a politician.
Trump gave Chao a cabinet position. McConnell is supporting everything Trump asks from him. That’s how politics works, and it’s getting Trump’s agenda in place.

During the Trump administration he’s been extremely trustworthy.

Prof. Jacobson, just curious: would you take Trump up on an
offer of a position on the federal bench?

I “pray”, Trump, doesn’t nominate any Homosexuals, or Lesbians…..Look what happened to the same, over “re-definition”, of Marriage! People of that “ilk”, are prejudiced, & biased, to such issues…..& must recuse themselves! Marriage, was defiend in the “Garden of Eden”, & then, was not subject to “man’s….Supreme Court!

I wonder if Graham isn’t the hold-up. Has Graham said privately that he won’t support Trump’s nominees in the Judiciary Committee?

I think the Reps now have a marjority of 3 rather than 1 on that committee, but still Graham coould muck things up.