Pelosi to Trump: No State of the Union in the House During Government Shutdown

Pelosi to Trump: No State of the Union in the House During Government Shutdown

“Again, I look forward to welcoming you to the House on a mutually agreeable date for this address when government has been opened.” 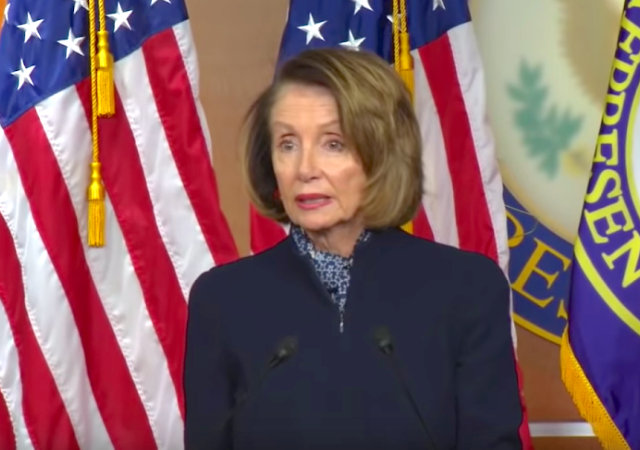 This morning, President Donald Trump sent Speaker of the House Nancy Pelosi a letter to inform her that he will deliver the State of the Union (SOTU) on January 29.

Pelosi said that the SOTU will not happen in the House chambers as long as the government is closed.

I am writing to inform you that the House of Representatives will not consider a concurrent resolution authorizing the President’s State of the Union address in the House Chamber until government has opened.

Again, I look forward to welcoming you to the House on a mutually agreeable date for this address when government has been opened.”

I ask Pelosi if she is concerned about establishing a new precedent by perhaps not having a State of the Union speech:

Pelosi:
No. Not at all

REPORTER: Why not invite Trump to a joint session next Tuesday?

PELOSI: “Because government is closed.” pic.twitter.com/SyHSusrcqW

Trump said that Pelosi doesn’t want to hear the truth:

It’d be a waste of time if he showed up on January 29:

A reporter just asked Pelosi: What happens if Trump still shows up for SOTU on 1/29? Well, he’d have to speak outside. A reminder from @CSPAN: The House speaker “controls the video and audio from the House chamber. If the House is not in session, there’s no video feed to show.”

Slightly off topic, The Spokesman Review is casting about for section 8 housing residents for a story about how the shutdown is affecting them.

Look for everything to ratchet up.

I bet President Trump was hoping she would do so. I am sure he has something YUGE planned.

Has anybody seen Pelosi’s brain? It seems to have scampered off when she wasn’t looking. I hope it doesn’t become road kill.

Pelosi has a strange medical condition: though her final episode of PMS was many years ago, her body forgot to tell her brain.

Do it in the Senate with no House Democrats in attendance. Have an empty chair next to the VP with a sign “Speaker”, and address a statement to “her” every once in a while.

Government is closed? Doesn’t that mean Pelosi and the other Congresscritters no longer are receiving paychecks? If only…

But if the Democrat-dominated bureaucrats are all in favor of being sacrifices to the Democrat-elite battle with the president then where is the downside?