Romney, the putative Boy Scout, was turned into a monster by Democrats and the media. And he blames Donald Trump for our divisive politics? 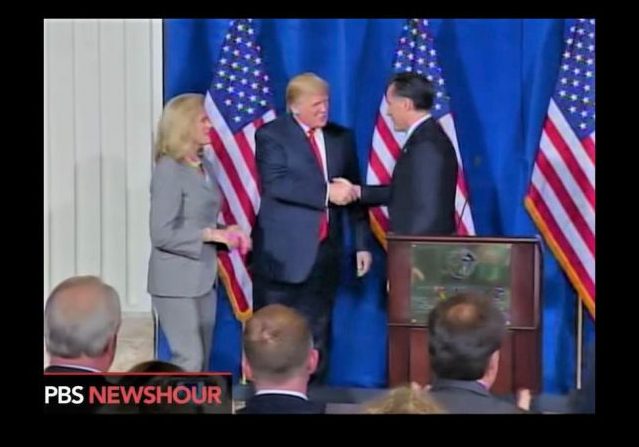 As his last act before getting sworn in as a Senator, Mitt Romney took to the pages of the newspaper that most epitomizes #TheResistance to attack Donald Trump.

You can read it here, at The Washington Post, Mitt Romney: The president shapes the public character of the nation. Trump’s character falls short:

It is well known that Donald Trump was not my choice for the Republican presidential nomination. After he became the nominee, I hoped his campaign would refrain from resentment and name-calling. It did not. When he won the election, I hoped he would rise to the occasion…. But, on balance, his conduct over the past two years, particularly his actions last month, is evidence that the president has not risen to the mantle of the office.

To a great degree, a presidency shapes the public character of the nation. A president should unite us and inspire us to follow “our better angels.” A president should demonstrate the essential qualities of honesty and integrity, and elevate the national discourse with comity and mutual respect. As a nation, we have been blessed with presidents who have called on the greatness of the American spirit. With the nation so divided, resentful and angry, presidential leadership in qualities of character is indispensable. And it is in this province where the incumbent’s shortfall has been most glaring.

My feeling on reading it is that Mitt Romney diminished himself more than he diminished Donald Trump.

The rhetoric in the Op-Ed, while lofty in places, lacks a reality. Romney was viciously attacked by Democrats and the media, accused of deliberately giving women cancer and putting them in binders, of being a cruel heartless businessman who destroyed lives to save a dime, of being cruel to the point of assaulting a high school classmate and abusing his own dog.

Mitt Romney, putative Boy Scout, was turned into a monster by Democrats and the media. And he blames Donald Trump for our divisive politics?

Is there anything worse than a self-righteous hypocrite?

You are being fêted by the very people who destroyed your presidential ambitions, but that love will be short-lived and only for so long as you are the useful idiot serving their purposes. You also are being praised to the rafters by NeverTrump Republicans whose goal is to see Democrats elected. Think about that.

Of course you can and should speak out on issues of importance to you. But that’s not what you did. You reopened campaign wounds for no good reason.

Sorry Mitt, your current virtue signaling, coming where and when it took place, isn’t noble, it’s just sad and pathetic.

POTUS is attacked and obstructed by the MSM media and Democrats 24/7. For an incoming Republican freshman senator to attack @realdonaldtrump as their first act feeds into what the Democrats and media want and is disappointing and unproductive. https://t.co/ArhI7Bi7bo

I’m disappointed in Mitt Romney. His defining act as an incoming Senator is to criticize Pres. Trump. If Senator-elect Romney thinks Trump is a bigger problem than Nancy Pelosi or Sen. Schumer then he has a lot to learn about how things get done in Washington.