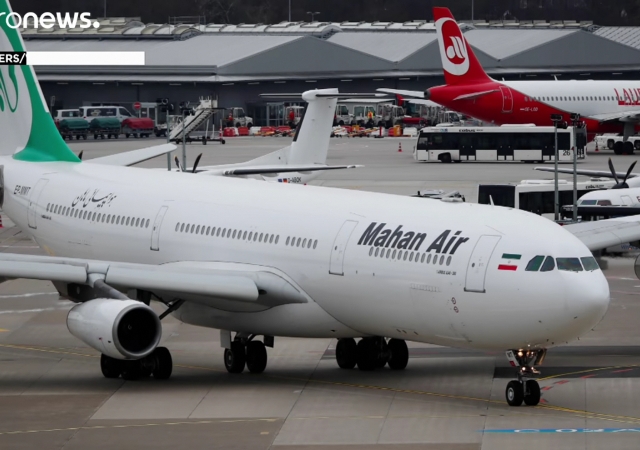 German authorities have banned the Iranian airline Mahan Air from operating in the country amid fears of espionage and terrorism.  Iran’s second largest airline has been linked to regime’s Islamic Revolutionary Guard, a U.S.-designated terrorist group.

The German Federal Aviation Office, equivalent of the U.S. FAA, has barred the airline from landing in the country with intimidate effect, German news outlets reported Monday.

The move comes just days after the German army arrested an Iranian spy working in its ranks. According to Germany’s federal prosecutor’s office, investigations were underway on “several espionage cases involving Iranian spy service.” The ban was imposed after an “assessment of German security concerns,” the government spokesman Steffen Seibert said.

The federal government has barred Iranian airline Mahan Air from operating in Germany with immediate effect. The airlines must freeze its flights in and out of Germany, a spokeswoman for the transport ministry said. The German Federal Aviation Office has delivered a notice to this effect to the company.

This is necessary for the “safeguarding of the foreign policy and security interests of Germany,” a spokesman for the German Foreign Office added. The country cannot grant transport (access) to companies that facilitate combat activities in Syria. Mahan Air undertakes flights to Syria and other war zones under the direction of the Iranian Revolutionary Guard.

Mahan Air has been flying thrice a week from Düsseldorf to Tehran. In addition to that, there is a weekly flight from Munich. [Translation by the author]

In a report last month, the German newspaper Bild hinted about the eminent shift in Germany’s policy towards Mahan Air. The official conformation to this effect came early Monday. The Bild also reported of mounting U.S. pressure on Berlin to cut ties with the terror-linked Iranian airline.

In its December exposé the Bild detailed the extensive links between the airline and Iranian Revolutionary Guard:

Mahan Air is no ordinary airline. CEO Hamid Arabnejad is a former commander of Iran’s Revolutionary Guard Corps – who have been on the United States’ terror list since 2017. Arabnejad himself has also been subject to sanctions since 2013. Among other measures, he is not allowed to enter the US. Just like Qasem Soleimani, head of the foreign unit of the Revolutionary Guard Corps, Arabnejad stems from the region of Kerman in Iran’s south, where Mahan Air is registered.

The airline does not only have formal and informal connections with the Mullahs’ notorious military unit, observers say. The airline also transports troops for the terror group’s foreign operations – primarily to and from Syria. Over 100 times, Mahan Air has provided dictator Assad with men, weapons, and ammunition, mostly on flights between Tehran and Damascus. The airline also carries out “special flights” on behalf of the Revolutionary Guard Corps and Syrian tyrant Assad.

Observers have registered numerous flights between Damascus and the Iranian city of Abadan at the border with Iraq. From here, the company transports Iraqi-Shiite militia to Syria, where they fight for Assad on behalf of Iran. In 2015, Mahan Air was evidently the only “civil” airline company to fly to Aleppo in order to deliver provisions for the Revolutionary Guard Corps active there.

The German decision comes at a time when other European countries have started hardening their stance towards Iran. Earlier this month, the EU was forced to impose sanctions on Tehran after the Netherlands and Denmark accused the regime of carrying out a series of assassination and bomb plots on European soil since the signing of the 2015 nuclear deal. The EU sanctions, though symbolic in nature, mark a shift in the bloc’s policy towards Tehran.

According to a report published by Reuters on Friday, European countries were “tiptoeing” towards Trump administration’s position on Iran. Quoting senior European diplomats, the report describes how the diplomatic shift was moving: “Europe closer to U.S. President Donald Trump’s policy of isolating Iran with tough sanctions.”

While German Chancellor Angela Merkel has been spearheading an EU-wide campaign to shield Iran from the latest round of U.S. sanctions, the Islamic regime poses a serious security threat to the country. Germany is home to at least 950 member of the Iran-sponsored Hezbollah terror militia, according to German’s domestic intelligence agency BfV estimates.

With attempts to infiltrate German military and run an extensive espionage network in the country, Iran makes no secret of its hostility towards Germany and the West. Today’s announcement shows that policy makers in Berlin are coming around to President Trump’s approach of isolating the regime in Tehran.

Yea, Iran has no reasonable reason other than that pesky 1953 CIA coup to be hostile to the US and its government, none at all.

a. There was no CIA coup. The only coup was Mossadegh’s against the Shah; within months the people turned against him, threw him out, and welcomed the Shah back. The CIA’s only role was in helping the Shah’s propaganda effort. What possible objection could anyone have to that?

b. Even if Mossadegh had been legitimage and the CIA had overthrown him, why would the mullahs care and how would it give them any cause for complaint? They’re no more pro-communist than the USA is or was.

And that’s suppose to explain all the pathologies of the regime since 1979?

I suggest you read Mossadegh, Iran, and the CIA’s Electric Kool-Aid Acid Coup.

would put that one down to the dulles brothers–firm believers in the ” domino theory ” responsible for several of our adventures in other parts of the world–central america, nam, etc.

Time to start destroying Iran’s approx. 40 reservoirs and hydro electric dams. That is the best way to clip their wings.

If they do not understand that message we should take more drastic action.

Pound those sobs into the stone age.

1. The stone age is precisely what the mullahs like. For the peasants, anyway.

2. The little people of Iran are getting torqued at the powers that be.