Meanwhile, American press scrambles to connect this development to the government shutdown. 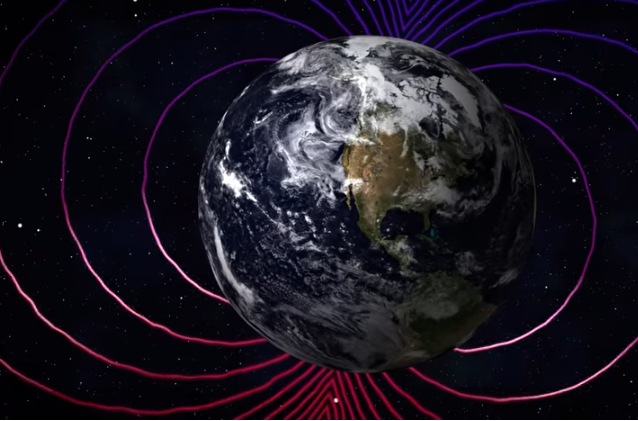 While many climate scientists have been focused on “global warming,” other Earth scientists are reporting that another planetary phenomenon of true importance is occurring.

The Earth’s magnetic field is moving, and the important magnetic “North Pole” is changing position.

Earth’s magnetic fields are shifting – and scientists are unsure why.

Researchers say the magnetic North Pole is ‘skittering’ away from Canada, towards Siberia.

The problem has got so bad, researchers around the world are scrambling to update a global model of the fields.

Called the World Magnetic Model, it underlies all modern navigation, from the systems that steer ships at sea to Google Maps on smartphones.

The Earth’s magnetic poles have always been on the move. The concern for scientists at the present time is that the rate of increase has increased, which means all the technology that relies on the magnetic North Pole needs to be adjusted.

The most recent version of the model came out in 2015 and was supposed to last until 2020 — but the magnetic field is changing so rapidly that researchers have to fix the model now. “The error is increasing all the time,” says Arnaud Chulliat, a geomagnetist at the University of Colorado Boulder and the National Oceanic and Atmospheric Administration’s (NOAA’s) National Centers for Environmental Information.

The problem lies partly with the moving pole and partly with other shifts deep within the planet. Liquid churning in Earth’s core generates most of the magnetic field, which varies over time as the deep flows change. In 2016, for instance, part of the magnetic field temporarily accelerated deep under northern South America and the eastern Pacific Ocean. Satellites such as the European Space Agency’s Swarm mission tracked the shift.

By early 2018, the World Magnetic Model was in trouble. Researchers from NOAA and the British Geological Survey in Edinburgh had been doing their annual check of how well the model was capturing all the variations in Earth’s magnetic field. They realized that it was so inaccurate that it was about to exceed the acceptable limit for navigational errors.

In fact, the magnetic North-South Poles have flipped during Earth’s history. Iron-bearing rocks can be dated based on the magnetic alignment detected. The field of paleommagnetism is based on this occurrence, and researchers have determined the last pole switch happened hundreds of thousands of years ago.

It was the last time this monumental reversal occured. Smaller deviations in the pole’s positions called geomagnetic excursions seem to occur far more frequently, including a weak flip-flop about 41,000 years ago when the field weakened to just 5 percent of its current strength for a few centuries.

The importance of the magnetic field to the Earth’s climate cannot be over-stated. That field deflects charged particles from the Sun, which would destroy the atmosphere if we didn’t have this protection. If you want to know what Earth would look like without our strong magnetic field, you need look no farther than Mars.

However, magnetic pole flips have occurred frequently through geologic history. Typically, the switch occurs every 200,000 – 300,000 years, so Earth is overdue for one. Their occurrence does not correspond to extinction level events and continental chaos despite dramatic claims to the contrary that I have read. The two chief problems associated with today’s activity are dealing with the global models and coverage by science-ignorant reporters.

Of course, the American media is keen to connect every single issue to the government shutdown. The magnetic field movement is no exception. As an example, here is the lede to the report in Fortune.

The north magnetic pole’s rapid and inexorable shift requires the early release of a new model of Earth’s magnetic field for military and civilian navigation around the Arctic. The partial federal government shutdown will delay the release of this model from January 15 until at least January 30, despite the U.S. military’s request for the update ahead of schedule.

And while our magnetic poles may change through time, our press remains completely the same.

A few months back I read an article about some people in Finland, I think, that erected a sculpture marking the Arctic Circle. It was built to be moved because they knew that the Earth wobbled and the circle changes. This is nothing new but I’m certain the effect on the climate must be significant. It has to be the dirty little secret calculation that global cooling deniers can never solve for.