Manafort didn’t try to pass election polling data to the Russians after all, but to the Ukrainians. OOPS. 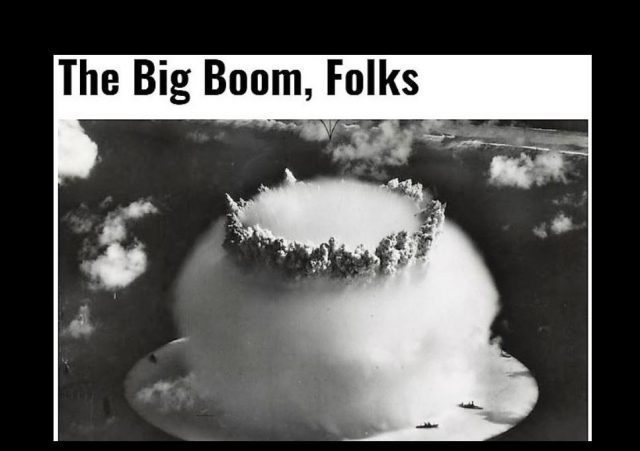 Both Mr. Manafort and Rick Gates, the deputy campaign manager, transferred the data to Mr. Kilimnik in the spring of 2016 as Mr. Trump clinched the Republican presidential nomination, according to a person knowledgeable about the situation. Most of the data was public, but some of it was developed by a private polling firm working for the campaign, according to the person.

Mr. Manafort asked Mr. Gates to tell Mr. Kilimnik to pass the data to Oleg V. Deripaska, a Russian oligarch who is close to the Kremlin and who has claimed that Mr. Manafort owed him money from a failed business venture, the person said. It is unclear whether Mr. Manafort was acting at the campaign’s behest or independently, trying to gain favor with someone to whom he was deeply in debt.

The seedy slimy usual suspects were ecstatic, they finally had Trump right where they wanted him. This was the proof they all had been waiting for. The walls were closing in on Trump. 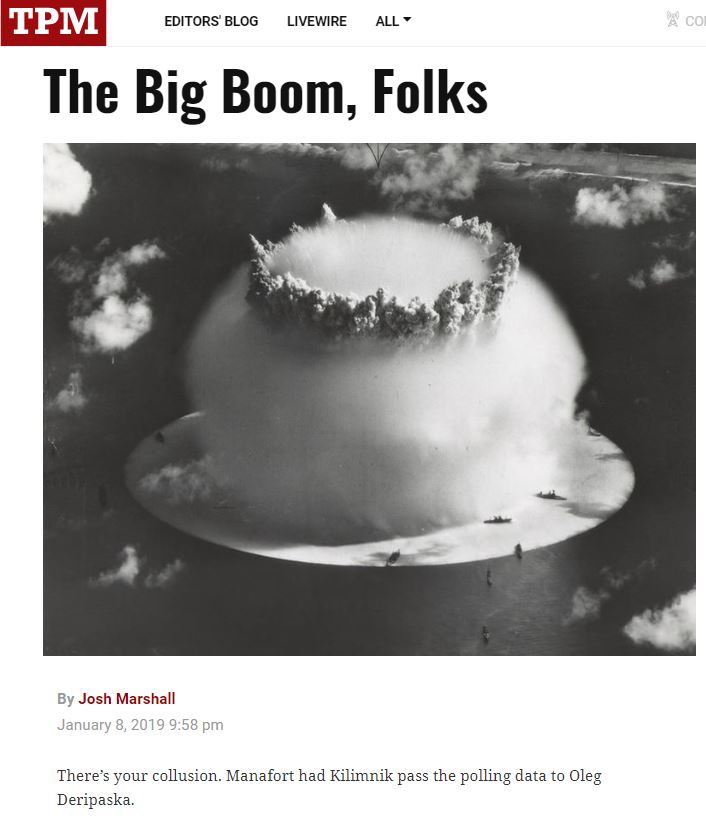 As I signaled last night, the seemingly accidental redaction error in the Manafort legal filing combined with the news published mid-evening by The New York Times is one of the biggest revelations in more than two years of the Trump/Russia scandal. It’s bigger than the Trump Tower meeting in June 2016, though the two cases can’t be fully understood without reference to each other. Just as importantly, these new revelations combined with earlier reports effectively end the debate about whether there was ‘collusion’ between Russia and the Trump campaign during the 2016 election. There was. It wasn’t marginal. It was happening at the very top of the campaign. The campaign manager was secretly funneling campaign data and information to a Russian oligarch closely tied to Russian President Vladimir Putin, someone who had no possible use for such information other than to use it in the Russian efforts to get Donald Trump elected President.

What follows is an incredibly damning and detailed account of how Donald Trump’s campaign manager worked directly with Russian intelligence to defeat Hillary Clinton in the presidential election.  After the election, Manafort was debriefed by Russian intelligence, as any spy would be in such circumstances.

Note that this revelation comes from one failure, intentional or otherwise, to fully redact one document in Mueller’s sprawling investigation.

How long will the Republican party choose to continue to tolerate the Trump administration’s combination of profound corruption and utter incompetence? ….

Martin Longman at Washington Monthly echoed the praise for Marshall’s analysis of this bombshell news:

Josh Marshall does a very good job of explaining why it is now beyond doubt that Paul Manafort, while serving as the campaign chairman of the Trump campaign, actively colluded with the Kremlin in their efforts to get Donald Trump elected president. What this means is that the president will probably have to fall back to a position he should have taken from the beginning. He’s going to have to argue that he knew nothing about what Manafort was doing and that he’s appalled to learn the details….

James Hohman at the Washington Post noted the significance of the news, and then summarized similar analysis from others, The new Russia revelations are more consequential than Trump’s newsless immigration speech (emphasis in original):

— The more consequential story coming out of Tuesday was the result of a flub by Paul Manafort’s defense team. It accidentally revealed, because of botched redactions, that the former Trump campaign chairman allegedly shared 2016 presidential campaign polling data with Konstantin Kilimnik, an associate the FBI has said has ties to Russian intelligence. Manafort’s attorneys were responding to allegations by special counsel Bob Mueller that the former Trump campaign chairman lied repeatedly to prosecutors after agreeing to cooperate.

The filing indicates “a pathway by which the Russians could have had access to Trump campaign data,” Rachel Weiner, Spencer Hsu and Rosalind Helderman report. “The Russian citizen, who began working for Manafort’s consulting firm starting in 2005, has been charged with helping his former boss to obstruct Mueller’s investigation of Russian interference into the 2016 election. He is believed to be in Moscow. …

“Remember, the polling info Manafort passed to Kilimnik was headed to Deripaska, who is close to Putin,” said Steven Hall, the former chief of Russia operations at the CIA. “The margins the Russians needed to change in key states during the 2016 elections [were] pretty small. Now we know how they were able to be so precise: Paul Manafort was providing polling data to Russia.”

“Manafort, who knows Deripaska very well and isn’t a total idiot, thought internal campaign data was worth real money to the oligarch (i.e., to count against Manafort’s debt). That only makes sense if Deripaska was passing on to others — and that Manafort KNEW he was,” saidDavid Burbach, who teaches national security and international relations at the Naval War College. “Deripaska himself would have more use for Arby’s BBQ sauce recipe.”

“If proven, then call it by whatever c word that you want — collusion, cooperation, conspiracy — but this is serious,” said former U.S. ambassador to Russia Mike McFaul, a professor at Stanford University.

“This is potentially very significant evidence of collusion,” said Post columnist Max Boot, a senior fellow at the Council on Foreign Relations who advised the John McCain and Mitt Romney presidential campaigns on foreign policy but who has emerged as a Trump critic. “Why would Manafort share polling data with the Russians unless it was to help them target their pro-Trump social media campaign?”

Atlantic writer David Frum, a former speechwriter for George W. Bush, posed another question: “Did the flow of data to the Russians from the Trump campaign halt when Manafort was fired August 19, 2016? Or not?”

— “Internal polling data is precious. It reveals your strengths—and your weaknesses,” saidSen. Richard Blumenthal (D-Conn.). “Why share such valuable information with a foreign adversary—unless that adversary was really a friend?”

— “It also bears asking, yet again, why someone like Manafort felt the need to allegedly lie about this stuff — especially at the expense of his cooperation agreement and further legal jeopardy he was well familiar with,” writes Aaron Blake.

Media Matters complained that Fox News was not giving the story enough coverage:

BUT WAIT, THERE’S A PROBLEM.

New York Times has made a significant edit to their report on Paul Manafort‘s sharing of Trump campaign polling data with an associate believed to be connected to Russian intelligence.

There’s been a great deal of commotion lately after Manafort’s legal team botched a series of court redactions and inadvertently revealed that he gave campaign data to his former business partner, Konstantin Kilimnik. When the Times initially reported on the news, they said Manafort had his former campaign deputy Rick Gates pass the data to Kilimnik so it could be relayed to Oleg Deripaska, a Russian oligarch closely tied to the Kremlin.

On Wednesday, the Times made a correction to their piece, saying Manafort actually wanted Kilimnik to direct the data to Ukrainian oligarchs Serhiy Lyovochkin and Rinat Akhmetov, not Deripaska.

A previous version of this article misidentified the people to whom Paul Manafort wanted a Russian associate to send polling data. Mr. Manafort wanted the data sent to two Ukrainian oligarchs, Serhiy Lyovochkin and Rinat Akhmetov, not Oleg V. Deripaska, a Russian oligarch close to the Kremlin.

So the polling information was intended for the Ukrainians, not the Russians.

Marshall was forced to eat crow to his prior post (quoted above):

[Ed. Note: Early this afternoon, the Times published a correction. Manafort asked for his campaign data to be passed not to Oleg Deripaska but two pro-Russian Ukrainian oligarchs named Serhiy Lyovochkin and Rinat Akhmetov, financial backers of Viktor Yanukovych. This is a major correction and a major error. But as I explain here, I don’t think it changes the big picture. Manafort was sending confidential campaign data back to pro-Russian figures in Ukraine while Russia was conducting a major effort to elect Donald Trump. I’ve left the post below as written before the Times‘ correction.]

Another one bites the dust.

I totally missed this whole story.