“The criminal complaint accuses Taheb of plotting to destroy a government building, which is punishable by five to 20 years.” 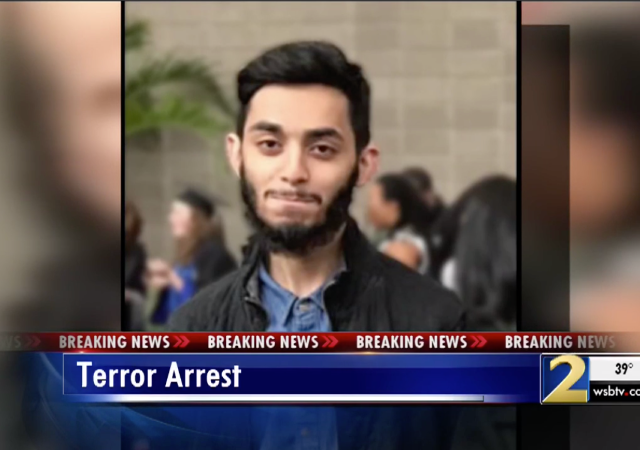 From The Atlanta Journal-Constitution:

Taheb’s alleged attack on the White House was supposed to take place around Thursday and involve various explosives and firearms, though even days before he claimed he had still never fired a gun in his life, according to the criminal complaint. He said he could learn fast, the document said. Authorities also said he planned to travel to the Islamic State territory but acknowledged he didn’t have a passport.

“All potential threats have been neutralized and were under control from the inception of this case,” said U.S. Attorney Byung J. “BJay” Pak, who added that authorities would take no questions on the investigation, which is ongoing.

The criminal complaint accuses Taheb of plotting to destroy a government building, which is punishable by five to 20 years. The document said a community member contacted law enforcement in March 2018 about him.

The charges detailed what Taheb planned to do to the White House:

On Aug. 25, 2018, Taheb allegedly put his vehicle up for sale to fund a trip. An FBI informant reached out to show interest and met with the suspect days later.

Taheb allegedly said he planned to travel to “hijra,” a term said to refer to Islamic State territory.

He also told the informant he wanted to attack the White House and Statue of Liberty in jihadist attacks, authorities said. At the beginning of December, Taheb arranged a meeting with the informant and an undercover FBI agent, the complaint said.

“Taheb explained that jihad was an obligation, that he wanted to do as much damage as possible, and that he expected to be a ‘martyr,’” the complaint said.

A few days later, there was another meeting in Alpharetta, during which Taheb allegedly showed the FBI worker a composition notebook with a hand-drawn map of the ground floor of the West Wing in the White House. Taheb seemed to believe the informant and FBI worker would join his plot if they could find weapons, according to the document.

By mid-December, Taheb had allegedly broadened the scope of places he wanted to attack to include the Washington Monument, the Lincoln Memorial and a synagogue. He said he wanted to use handguns, IEDs, an AT-4 anti-armor weapon and hand grenades.

FBI agents met with Taheb on Wednesday in a parking lot for a weapons and car exchange. Taheb hoped to receive “semi-automatic rifles, explosive devices and an AT-4.” Another informant had the weapons in a tractor-trailer and presented them to Taheb. He took them in a backpack and the agents arrested him.

FBI agents searched Taheb’s home on Wednesday. He supposedly lived with his mom.

He doesn’t look like the brightest shish on the kebab.

You are right, after 1400 years of close inbreeding, the vast majority are dull witted and prone to irrational anger.

Democrats managed to acquire those attributes in just 200 years

This is not this “a guy from Georgia”. Yes, those words may be legally true, but they are morally false.
Who brought him here? Who brought his parents here?

One of the earliest items budgeted for by the continental Congress was hostage ransom and tribute payable to the Muslim Pasha who kidnapped American soldiers ceiling near Libya. They were kidnapped and enslaved because they were not Muslim, and we had to pay ransom to recover their bodies and souls, those that survived that is.

Who is inviting and engineering the destruction of our nation?

“Georgia man” my Aunt Fanny. I’m a Georgia man and he don’t look like nobody I know ‘cept some of the people who run the gas stations around here.