Brown’s prohibited from being governor again, thanks to term limits, is one of my few, civic joys. 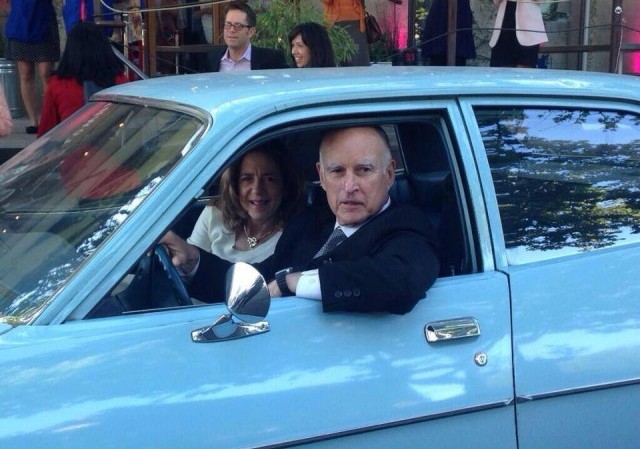 California Lieutenant Governor Gavin Newsom will officially become governor on Jan. 7th. On his way out of office, our current governor is leaving in his trademark “Moonbeam” style.

Chuck Todd, host of MSNBC’s “Meet the Press,” asked about how California’s new gas tax hurts rural residents who need cars because they don’t have access to public transportation. He cited an article from CityLab, which said the gas tax “punishes people for not having access to transit options,” but Brown bowled right over Todd’s research and blamed rural Californians for not being on board with his agenda.

“You won your gas tax fight, but rural Californians didn’t like it,” Todd said.

“No, they don’t. They don’t like a lot of things. They voted against housing bonds, they voted for the Republican Cox who didn’t even make 40 percent,” Brown said, referring to his reelection’s vote margin.

He then went on to divide residents of his own state into the categories of “red” and “blue,” siding with the wealthier, more Democratic residents on the coast, who have a majority and want to raise taxes on rural Californians.

“There is the same divide in California as in America. The red is different than the blue, and it is associated definitely with rural areas,” he said.

That divide will likely only increase during Newsom’s time in office.

Next, Brown gave 143 pardons and 131 commutations for Christmas, including a handful of refugees and immigrants that he hopes to spare from deportation by scrubbing their criminal histories.

…Brown also granted pardons to five Cambodian refugees brought to the country when they were 5 years old or younger, and now face deportation because of their criminal pasts. He likewise pardoned a Honduran immigrant facing deportation.

While the orders don’t automatically stop federal deportation proceedings, Brown’s actions allow the immigrants’ lawyers to argue that the federal government’s assertion that criminal histories qualify them for deportation is now no longer applicable.

Finally, Newsom will have to deal with the mechanical albatross better known as Brown’s high speed rail system.

Gov. Jerry Brown has devoted half a century of political knowledge and power to advance the California bullet train construction project, but he leaves office with its future badly damaged by cost overruns, mismanagement and delays.

It hands incoming Gov. Gavin Newsom a tough decision: delay indefinitely the goal of a statewide bullet train system and salvage something useful out of the billions of dollars already spent, or stick with the original vision and find at least $50 billion in new money to keep it going.

Either option will probably lead to a clash between the project’s die-hard supporters and its skeptics. Almost every major engineering and construction firm has a big stake in the project, as do unions, small businesses and city governments. The outcome will depend on how much fiscal pain and risk Democrats are willing to accept.

As a Californian, I have few things about which I can be politically grateful for. Brown’s being prohibited from being Governor again, thanks to term limits, is one of my few, civic joys.

Hey–is that Linda Ronstadt in the passenger seat?

Democratic leverage is enjoyed at the cost of violating civil rights. Cosmopolitan, high-density population centers are expensive to operate and maintain. The medical insurance market is already regulated (effectively single-payer). The niche green blight energy market was his last hope for a ready source of sustainable, renewable, laundered greenbacks.

Governor Moonbeam till the end.

You really want to know what is the biggest irony?
The rural parts of Califrnia probably have a total 1/1000th the carbon footprint of the urban parts.