Tree of Life Rabbi Jeffrey Myers: “I was pleasantly surprised by a warm and personal side to the President that I don’t think America has ever seen.” 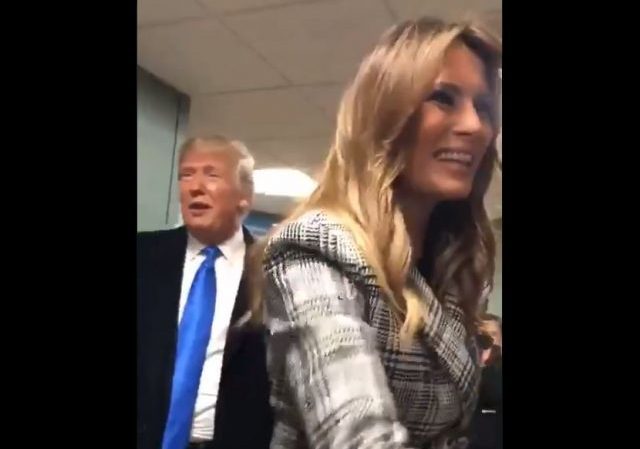 The media went wild and claimed that the city of Pittsburgh didn’t want President Donald Trump and his family to visit and pay respects to those massacred 11 people on Sunday.

Video inside the hospital has a different story. It shows the staff warmly greeting Trump, First Lady Melania Trump, Ivanka, and Jared Kushner.

To disappointment of the media even more, Tree of Life Rabbi Jeffrey Myers only had nice things to say about Trump.

@RealJamesWoods I wanted you to see the President tonight at UPMC in Pittsburgh visiting the survivors of the shooting as the nurses and Dr’s were waiting to see him. pic.twitter.com/LdbeHz9pti

All the media reporting is about how Trump is not wanted in Pittsburg but when he visits the hospital treating victims of synagogue shooting this is the response from the staff. pic.twitter.com/S9NVrXWZF2

When the staff saw Trump and Melania, they called out to them. Both of them quickly and eagerly went to thank the hospital staff for their hard work.

One staff member asked to shake Trump hand and another thanked Melania. A male employee told Ivanka he loved her.

On Wednesday morning, Myers joined CNN and praised the president:

Tree of Life Rabbi Jeffrey Myers on Pres. Donald Trump’s Pittsburgh trip: “I was pleasantly surprised by a warm and personal side to the President that I don’t think America has ever seen.” pic.twitter.com/kujaqDxtJM

Earlier this week, CNN tried to coax Myers to blame Trump for the tragedy, but he refused to take the bait:

Tree of Life Rabbi Jeffrey Myers declined to blame anyone for the shooting at his synagogue despite hints from a CNN anchor that President Donald Trump is to blame.

During a Monday interview on CNN, anchor Alisyn Camerota asked Myers if he blames anyone “beyond the gunman” for Saturday’s shooting that claimed the lives of 11 congregants.

“What lights the match of hate?” Camerota pressed.

“I think you’re raising one of those great questions that people far smarter than I can answer,” Myers replied. “I do recall this: if we look in the Bible after the story of the flood and Noah, God regretfully says to Noah, ‘I have learned that man from his youth is prone to evil,’ which is, you would think, a horrific thing for God to tell us.”

I swear, this is the real Trump. This is why people like him and voted for him. You can tell when you watch videos with him and people in the general public, especially children, that he is comfortable to be around. Unlike Hillary, I have always felt that you can go up to Trump on the street and he’d give you the time of day.

But overall, people like him because he doesn’t have the same aura around him that other politicians have.

I believe he gives the tough guy attitude most of the time because he is a businessman and you have to show that in order to get things done.

It’s a facade I wish he would drop.

It’s a wonderful video, I watched it several times. I loved how excited the hospital staff were to see President Trump and First Lady Melania! Jared giving the ‘thumbs up’ at the end when someone said they loved Ivanka was adorable.