Using their power over Committees in the new Congress. 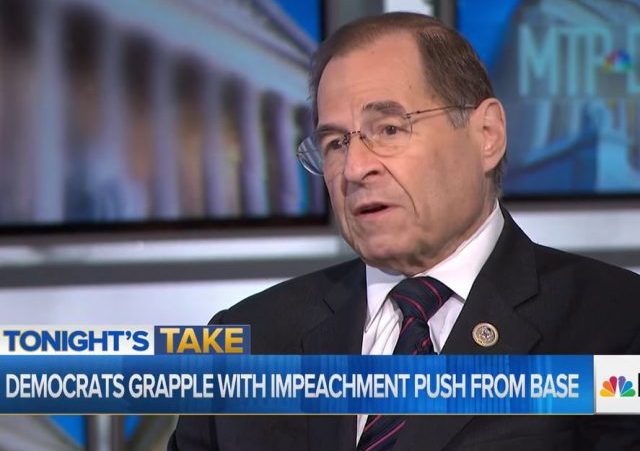 For months Democrats and #TheResistance have been demanding impeachment not only of Trump, for supposed Russia collusion, but also Brett Kavanaugh for alleged perjury during his confirmation testimony.

Now that Democrats will control the House, and the House Judiciary Committee, are Democrats serious?

According to reporting by Molly Hemingway at The Federalist, Incoming Democrat Chairman: Dems Will Go ‘All-In’ On Russia, Impeach Kavanaugh For ‘Perjury’:

In post-election chats with various callers while riding the Acela train from New York to Washington, Nadler gave advice to a newly elected representative and discussed potential 2020 Democratic presidential nominees with another….

The two discussed two routes for investigating new Supreme Court Justice Kavanaugh. The first is to go after the FBI for how they handled the investigation into unsubstantiated claims he sexually assaulted women. “They didn’t even do a half-ass job,” he said. “They didn’t interview 30 witnesses who said ‘Interview me! I’ve got a lot to say!’” he said, while mimicking people waving their hands to be called on.

His other plan is to go after Kavanaugh because “there’s a real indication that Kavanaugh committed perjury.” …

When the caller suggested going after Kavanaugh quietly, Nadler explained, “You can’t do it quietly because word will get out that the FBI or the committee is reaching out to witnesses.”

The caller then suggested that impeachment might still be worthwhile because the president elected in 2020 could nominate someone else. Nadler said the problem was that any investigation wouldn’t take long enough to last until the presidential election. “There are a finite amount of witnesses. I don’t see why it should take long at all,” he said. “We’re not talking about a 30-year scheme of getting money from Russians via hidden sources — that takes time.”

This would be consistent with Nadler’s statement months ago that he “would dearly love to preside over the impeachment of Donald Trump.”

Since liberals cannot see unintended consequences, the likely outcome is for more exposure of Ford and Feinstein to the point of criminal charges being files and followed through on.

What criminal charges could be brought against Feinstein, that would not be precluded by her congressional privilege?

I hope they follow their game plan; really remind America that democrats are about power, not governance or leadership.