Ashkenazi chief rabbi of Israel allows family of Ala’a Qarash (aka Alah Kirsh) to bury him at Jewish cemetery as an “exception” because the “Muslims themselves are unwilling to bury him” and he was a “righteous gentile” who “showed good will” to Jews.

In a highly unusual ruling, one of Israel’s chief rabbis has allowed a Palestinian Arab man to be buried in a special plot, reserved for those without religious faith, in the Jewish Har HaMenuchot cemetery in Jerusalem.

At issue is the decision of Aryeh Stern, the Ashkenazi chief rabbi of Israel, to enable the West Bank-based family of Ala’a Qarash (also spelled Alah Kirsh) to bury him at the Jewish cemetery as an “exception” because the “Muslims themselves are unwilling to bury him” and he was a “righteous gentile” who “showed good will” to Jews.

Along with five others, Qarash had been killed back on November 4th in a horrible car accident on Israel’s Highway 90 when a truck collided with a minibus. But Jerusalem’s grand mufti—Ekrima Sa’id Sabri—determined that Qarash didn’t deserve a proper burial at a Muslim site, including in the Muslim cemetery in the east Jerusalem where Qarash’s other family members are buried, because he had been suspected of allegedly selling real estate in that part of Israel’s capital city to Jews a few years ago.

For this supposed “traitorous crime” of selling property in Jerusalem to Jews, the family also wasn’t allowed by the Wakf, the Islamic trust that oversees day-to-day management of the Temple Mount, to bring Qarash’s body to the Al Aqsa mosque for a special prayer and they were reportedly “forbidden” by imams to pitch the customary mourner’s tent to receive guests and well-wishers.

For the same reason, other mosques in east Jerusalem refused to hold Qarash’s funeral service (his body has been temporarily interred outside the cemetery in Nabi Salih, a village near Ramallah in the West Bank).

It’s awful that a Palestinian family deep in grief would face these kinds of humiliations and obstacles from their own faith-based community, and its good to know that Israel’s rabbinate is willing and able to intervene and provide support on such occasions.

This kind of hate makes me terribly sad, but #Israel's response makes me tremendously proud!

An Arab Muslim man to be buried inside a Jewish cemetery after Muslim cemeteries refused to bury him over suspicions he sold a property to Jews – https://t.co/ScD23PHE9P pic.twitter.com/ouvmy6Hnkb

But this largely under-reported story actually tells us a lot about why the Israeli-Palestinian conflict is so intractable. Most if not all conflict resolution experts agree that peace and reconciliation requires the development of trust among conflicting societies, which can only happen with frequent and sustained people-to-people interactions. Yet, its precisely these kinds of economic, cultural and social engagements that the Palestinian and BDS (boycott, divestment, and sanctions) anti-normalization campaigns reject.

The reality is that the situation of the unfortunate Ala’a Qarash, who was disgraced and shunned by his people even in death for engaging in a routine real estate transaction with Jews in Jerusalem, is just the most extreme manifestation of a general taboo against interacting in any way, shape, or form with Israelis or Zionists.

According to several media reports of the incident regarding Ala’a Qarash (see here and here), the Jerusalem mufti based his ruling on a 1935 fatwa, or religious Muslim edict, by one of his predecessors—Jerusalem grand mufti Haj Amin al-Husseini, who guided the Palestinian Arab national movement and shaped its political and religious ideology in the 1920s and 1930s.

Husseini was a notorious anti-Semite who repeatedly instigated Arab violence against Jews and spent the WWII years in Berlin producing pro-Nazi propaganda and helping to recruit Muslims for several SS divisions. Less known is the fact that he also ruled that “anyone who sells a house or land to Jews will not receive Muslim burial.” 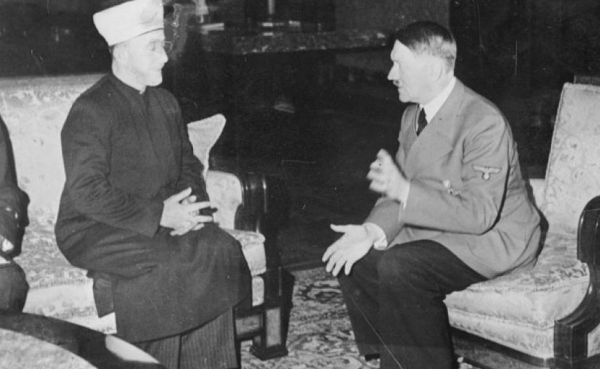 In his own ruling last week, Sabri reportedly noted too that “anyone who sells [property] to Jews in Jerusalem’s Old City is no longer part of the Islamic faith, we will not accept his repentance, and he will not be buried in a Muslim cemetery.”

Selling homes in east Jerusalem and the West Bank (Judea and Samaria) has long been a risky business for Palestinians and a punishable offense.

Writing for Gatestone Institute, the award-winning Israeli-Arab journalist Khaled Abu Toameh published a helpful primer of the history of this shameful history a few years ago. In his article, Toameh describes how the belief that “selling a house to a Jew is a betrayal of Allah” became ingrained within Palestinian Arab society and the basis of numerous legal rulings and punitive measures.

The concept of “killing a man for doing business with a Jew” was put into force by Jordan in the 1950s when it illegally occupied and annexed the West Bank (Judea and Samaria). Later, the PLO incorporated the legal code, which enforced a penalty of execution of any “traitor” caught selling or even just renting property to “the enemy.”

You’d think that such injunctions would weaken or get watered down over time, but the reverse has been true. The Palestinian Authority (PA) has reaffirmed the law on a number of occasions. And in the mid-1990s the PA’s U.S.-trained security forces were accused of “kidnapping and killing” suspected land dealers.

Toameh notes that the PA has only executed those convicted of selling property to Jews a few times. But back in 2014, PA President Mahmoud Abbas said that doing so was still a “clear-cut capital crime” and that those engaged in real estate dealings with Jews would be punished with “life imprisonment—with hard labor.” 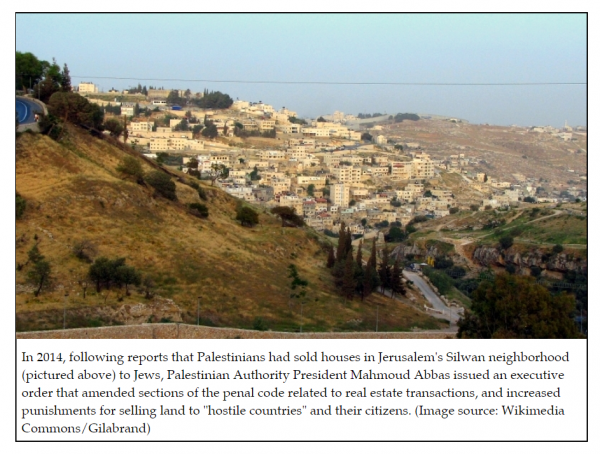 It’s clear that even if the penalty usually isn’t death, the risks and dangers associated with selling land to Jews are very real. Over the years at least a dozen Palestinians, and maybe more, have been abducted and killed by Palestinian activists on the suspicion that they sold property to Jews or served as middlemen for such transactions. Last month, a Palestinian-American was apprehended by PA police for allegedly helping to finalize the sale of a home in east Jerusalem to a Jewish buyer.

As journalist Khaled Abu Toameh rightly notes, the ongoing campaigns against Palestinians suspected of selling or renting real estate to Jews is also part of the belief that the “entire land is Muslim-owned” and, as such, no Palestinian person much less a governing authority is entitled to give up even one inch of it to a non-Muslim.

The problem isn’t just the bigoted nature of this injunction. It also pretty much precludes any kind of land-for-peace deal that has been the basis of negotiations going back for decades. Toameh puts it well:

“This would be the nail in the coffin of any Palestinian leader who attempts to make any territorial compromise as a part of a peace agreement with Israel….The stakes are very, very high: betrayal of Allah and Prophet Mohammed are at issue.”

It’s important to understand that these anti-peace efforts to prevent real estate transactions with Jews is actually part of a much larger anti-normalization campaign that’s been pushed by years by Palestinian officials and by the BDS movement. In Israel and the West Bank/Judea and Samaria, we can see anti-normalization in efforts to shut down Israeli-Palestinian meetings and coexistence groups and to intimidate Arabs who participate in them, BDS Leaders Slam Leftist U.S. Peace Groups. In the U.S. and other countries, anti-normalization is a central stance of the anti-Israel BDS movement, resulting in the ostracism of Jews from campus life and the shunning of Zionists from progressive political spaces.

Bottom line: threatening Palestinians with what is effectively excommunication for engaging in financial transactions with Jews or Israelis is just an extreme manifestation of the problems that Palestinians who try to engage with their Israeli counterparts routinely run up against. Even if a total shunning—as is happening to the Qarash family—isn’t the punishment, the costs of crossing these concocted ‘picket lines’ can be effective deterrents to the kind of people-to-people interactions necessary for peace.

Miriam F. Elman is an Associate Professor of Political Science and the Inaugural Robert D. McClure Professor of Teaching Excellence at the Maxwell School of Citizenship & Public Affairs, Syracuse University. She is the editor of five books and the author of over 65 journal articles, book chapters, and government reports on topics related to international and national security, religion and politics, and the Israeli-Palestinian conflict. She also frequently speaks and writes on the Boycott, Divestment, and Sanctions (BDS) anti-Israel movement. Recently, Elman was included on the Algemeiner newspaper’s 2018 list of the top 100 people worldwide who are “positively influencing Jewish life.” Follow her on Facebook and Twitter @MiriamElman

Admittedly I am having a lot of trouble keeping my Sadducees and my Pharisees straight.

The Pharisees are what are today known as Orthodox Jews. The Saducees were basically the elite left-wing of their day, few in number but rich, politically powerful, and culturally Hellenist. Once the Temple and political institutions were gone they disappeared, leaving the future of Judaism to the Pharisees. Josephus was a Saducee. (He reports rumors of another tiny group whom he calls Essenes, but there’s little if any evidence that they actually existed.)

It was a serious question. Thank you for the serious answer. I honestly didn’t know.

I should have known. Given how long I’ve been alive.

Apparently I’m not the only one.

This is a clear reminder that from the beginning the “peace prosses” was doomed to failure. Not because of Isreals actions but because of the intractable nature of the “Palestinian Leadership.” I mourn the day that the United Nations recognized the PLO as the voice of the Palestinian State.

As long as arabs are occupying Judea and Samaria, there’s no chance for peace.

Such amazing benevolence. Even after 3,000+ years of brutally horrific pursuit and genocidal treatment.

Thank you, Aryeh Stern, for this ray of Goodness. With so much of the world spinning out of control, righting this wrong brings us back to Faith and Hope.