California is now dead to me. 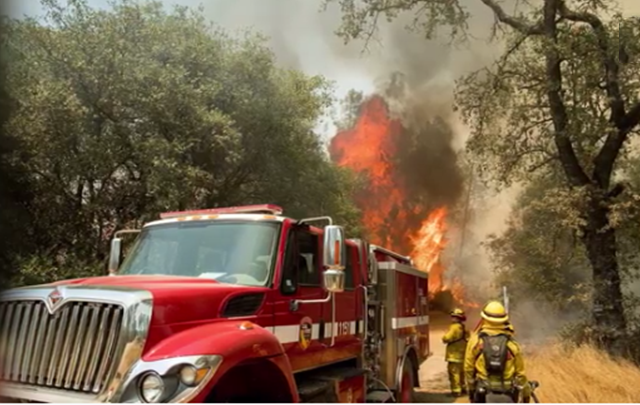 California is dead to me…a smoldering ruin of a once prosperous state. I spent a glorious Thanksgiving week in Michigan, enjoying my first snowfall in many years and escaping coverage of the wildfire disaster.  Before leaving, I went through my jewelry collection and packed sentimental favorites and valuable items in the event that San Diego was hit with a fire during my vacation.

While I was organizing my case, my anger at the choices made by both federal and state politicians and bureaucrats that led to the loss of life was heating up as hot as any of those flames. And instead of meaningful change, Governor Jerry Brown’s solution to this is to let the utilities charge us for the fire settlements likely to stem from this disaster.

Brown announced Friday he’d signed the bill, which is aimed at preventing bankruptcy for Pacific Gas & Electric Co. The massive utility faces billions of dollars in liability if investigators determine its equipment caused the Tubbs Fire that destroyed thousands of homes and killed 22 people in Santa Rosa last year.

The measure is the most hotly contested part of a wide-ranging plan to reduce the growing threat of wildfires.

Long-time readers will recall the Legal Insurrection team has been diligently covering the climate-change-centered, environmental-activist policies that have made lumber industries an enemy-of-the state.

Some highlights over the last 5 years I have monitored the state’s blazes include:

Every time there has been a wildfire catastrophe, I have hope that it will be the last.  We are taxed, lectured, and regulated to the based on the promise of “fire security”…and all is well until the next Santa Ana or the next arsonist.

Now, Paradise has been literally destroyed. As of this report, the historic and deadly Camp Fire is now 100% contained as 85 are confirmed dead and over 200 are still missing.

My rage at Sacramento has also been fueled by the “Sanctuary State” antics that have helped create the disruption at the border less than 30 miles from my home.

I came to California from Michigan in 1985 because it offered more opportunities for success. Now, my husband and I are planning to move once my son is in college, as the voters, unions, and politicians have incinerated the pathways to life, health, and prosperity that once existed in the state.

” bill their customers to pay for future legal settlements stemming from devastating 2017 wildfires.”

Gently please because this is not my realm. But people are asking where else is the money going to come from…

If I lose a $30 million settlement, my insurance pays a small %, my bankruptcy a small %, and the rest doesn’t get paid out.

Or in this case, the debt flows back to the people affected and agencies that spent money containing the damage and cleaning up. You telling me there’s not a Sexual Harassment Slush Fund that can’t be raided? A Climate Doom Ver 5.1 Conference that can’t be canceled?

It’s the State’s fault, not the power company’s. If the Government is dousing the forest floor with JP5 aircraft fuel and I make a spark…

As a recent refugee from Venezuela on the West Coast, I say to you and your family: Come to Texas (or, as a California Highway Patrol Officer called it wistfully, “Free America”). I’d recommend East Texas, particularly. Water everywhere, trees, and reasonable regulations, taxes, and people.

Texas is nice. But you had me at 10% sales tax…no thanks.

Sounds like you’d be happy in any former CSA state, Better dead than red

Logically the fires were caused by trees falling on utility lines because of the high winds. You could blame PGE because they didn’t clear enough of the trees to prevent this. If they had cut back the trees sufficiently the power would have been a lot more expensive. The fact that they didn’t made the power cheaper which benefited consumers. It’s logical that the consumers pay for this disaster with higher rates which PGE could use to pay for those damaged by the fire.